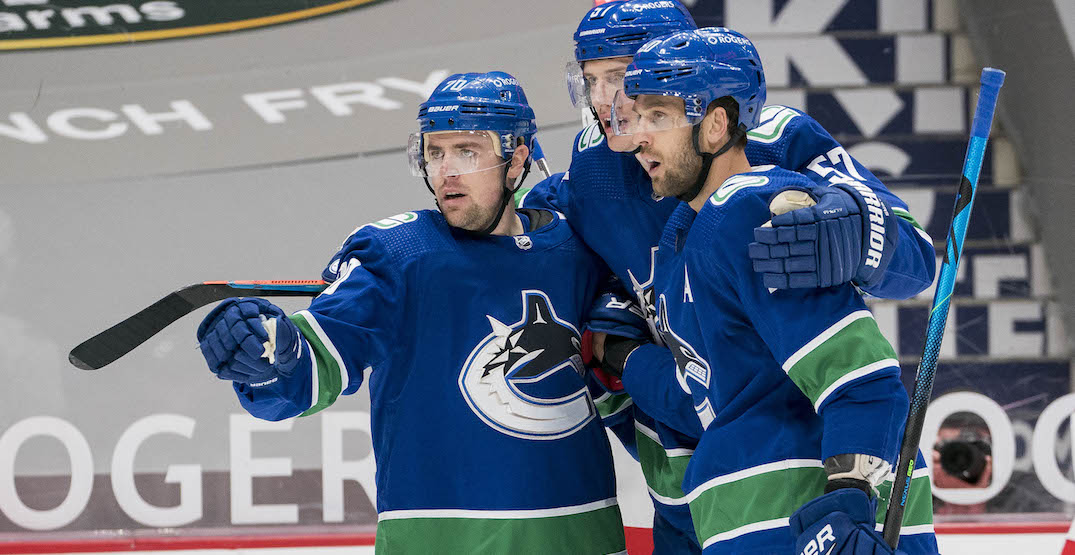 After the Vancouver Canucks played some historically bad defensive hockey to start the season, they began to tighten up their game.

Unfortunately, it hasn’t translated into wins.

The Canucks have blown multiple leads of late, and are 2-6-2 in their last 10 games. That stretch of futility has nearly dashed their playoff hopes, as evident by these models below that predict every team’s chances of making the playoffs.

Suffice to say that none of them are optimistic about the Canucks odds:

Based on the way the season has progressed, the Canucks need to start taking a serious look at their roster and figure out who could bring some value back at the trade deadline.

The deadline is currently set for April 12, but travel restrictions will enhance the urgency for contenders to make a deal prior to then. Aside from that, general managers have tended to make their big move before the deadline in recent years.

Another reason to start dealing early is because of the impending expansion draft happening this summer. If the Canucks are about to enter seller mode, they need to start calling teams who might have some protection issues with their players.

Not that this management group has had a penchant for being proactive… but I digress.

Below is a list of players that the Canucks should consider trading before the deadline, if they are going to be sellers. Underwhelming players on unattractive contracts such as Loui Eriksson, Jay Beagle, Antoine Roussel, and Braden Holtby were not considered.

However, Pearson is on an expiring contract. And, despite solid underlying numbers, Pearson is probably a better third-line forward on a contending team.

What a disaster of a season for Jake Virtanen.

“Shotgun Jake” propelled Canucks fans to shotgun 20 beers (including playoffs) last season, and it led to him signing a two-year extension with the Canucks.

That deal seemed reasonable at the time, but it looks like a terrible decision in hindsight.

Virtanen has been awful defensively and has contributed next to nothing on offence either. It’s clear that a change of scenery is needed for the 24-year-old, and Anaheim was reported to have interest.

Because of Virtanen’s putrid production, this seems like a deal where each team would swap disappointing players (similar to the Pearson-Erik Gudbranson swap from 2019).

Anders Bjork (Boston). Virtanen fits the type of player that Boston often targets. Perhaps a swap for another struggling player in Anders Bjork (24-year-old, 16 GP, 1-2-3) is on the table.

It’s hard to imagine that the Canucks would trade a foundational player like Brandon Sutter… but the 31-year-old is actually setting himself up to be a viable trade candidate.

Green with the galaxy brain move of increasing the trade value of Sutter, Gaudette and Virtanen by bumping Miller down a line. https://t.co/jw1SIdFYDL

He’s been one of Vancouver’s only players to contribute offensively in the bottom-six, even if his zero assists don’t reflect well for someone who plays centre. Sutter is also still a valuable penalty killer.

A team with playoff aspirations who struggles on the PK could consider someone like Sutter. Teams like the Pittsburgh Penguins, Philadelphia Flyers and Edmonton Oilers come to mind.

After failing to hold onto a regular lineup spot last season, Jordie Benn has been able to stick alongside Quinn Hughes for the majority of the season.

Benn’s held his own in that spot, but the reality is that he’s a 33-year-old depth defenceman on an expiring contract.

Possible return: A mid-round pick seems like a safe bet.

The lifetime Canuck seems loath to leave the organization, but Alex Edler will have to ask himself some tough questions if Vancouver is finally ready to move on.

Edler is a player who legitimately has value. Even at 34-years-old, Edler is an effective defensive defenceman who can kill penalties and log top-four minutes.

Consider that a 32-year-old Alec Martinez was traded for two second-round picks at the 2020 deadline. Don’t tell me the Canucks couldn’t at least fetch a second for Edler.

Canucks up for trade consideration

Head and shoulders above the league for individual scoring chances.

He’s been firing the puck like crazy, yet he has just two goals on 41 shots.

Still, there has to be some disappointment with the Canucks in terms of Gaudette’s developmental regression. The lack of puck luck is one thing, but he’s continued to struggle at centre ice to the point where he was supplanted by Sutter.

Right now, he’s trending towards becoming a middle-six scoring winger, rather than a third-line centre. That opens up other issues for the Canucks and it also hampers Gaudette’s trade value since centres are more valuable than wingers.

Because of that, and the fact that he’s been punished by the hockey gods, it’s probably not worth trading him right now unless a team is willing to pay for his potential.

I’m not advocating for the Canucks to do this, but this is the nuclear option if the team decides that they really need to blow things up.

It seems like the Canucks envision J.T. Miller as part of the Canucks leadership group for the long-term. He also represents one of Jim Benning’s big wins in a trade.

That being said, despite the points still being there, he isn’t as effective as he was last season. If the Canucks are going to be a bottom-feeder, perhaps it’s worth discovering his value on the trade market.

The pie in the sky possibility here could be Miller and Gaudette for a first-round pick and Jake Debrusk from the Bruins. Miller should be worth at least a first, and the Canucks would probably have to add something else to pry the 24-year-old Debrusk out of Boston. He’s struggled this season but had a career-high of 27 goals as a 22-year-old back in 2019.

Again, that’s if the Canucks decide to go nuclear.