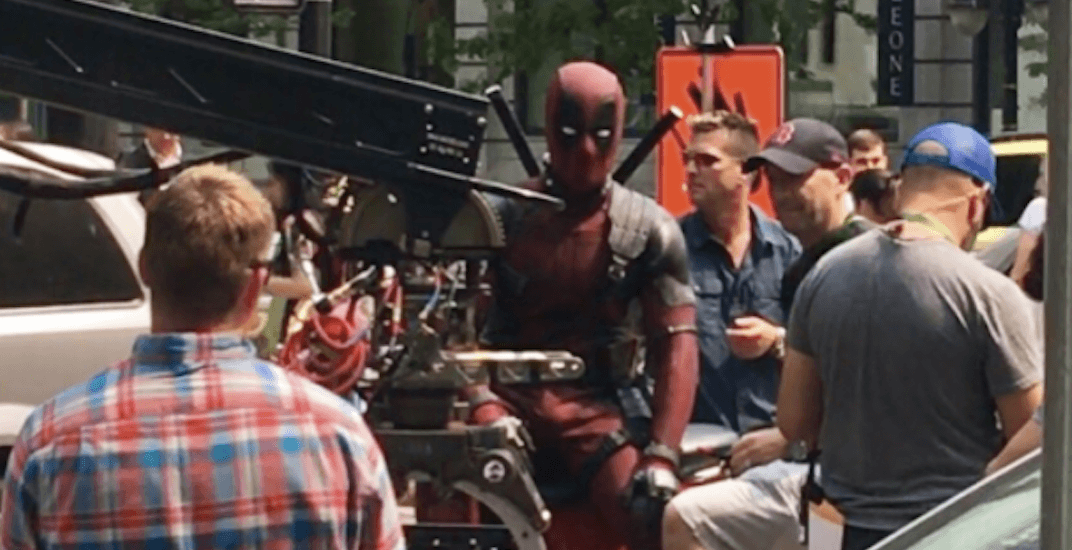 It’s no secret that Deadpool 2 has been filming in Vancouver for the past month, and everyone’s favourite foul-mouthed superhero was spotted downtown on Monday and Tuesday.

While many who arrived to get a glimpse of filming are surely big fans of the movie, the actor playing the titular character also had some influence in bolstering the crowd that lined the streets.

Vancouver-born Ryan Reynolds posed for photos with the Vancouver Police Department and thanked them for their help in blocking off the streets needed for filming, and he was seen acting in Deadpool’s usually goofy manner whether cameras were rolling or not.

With so many people stopping to watch the filming it’s a wonder that the crowds won’t be seen in the background of the scene.

One things for certain: Vancouverites love themselves some Deadpool.

Stumbled upon the filming of some movie downtown they were calling ‘Blue Caribbean’ yesterday 🤔…. #deadpool2

I JUST STUMBLED ONTO THE SET OF DEADPOOL 2 WHILE IN VANCOUVER!! pic.twitter.com/DVhltb4ngE

I’m pretty sure that I’m prettier than Ryan Reynolds with the mask on! 😎 #deadpool2 #deadpool2

Ryan Reynolds or a stunt double? Since it’s my #birthday today, I’m choosing to believe that I just saw @vancityreynolds 😉 #deadpool2

Just hanging out on the same street as Ryan Reynolds while he shoots a scene for #deadpool2 🏍 Not a big deal really!!