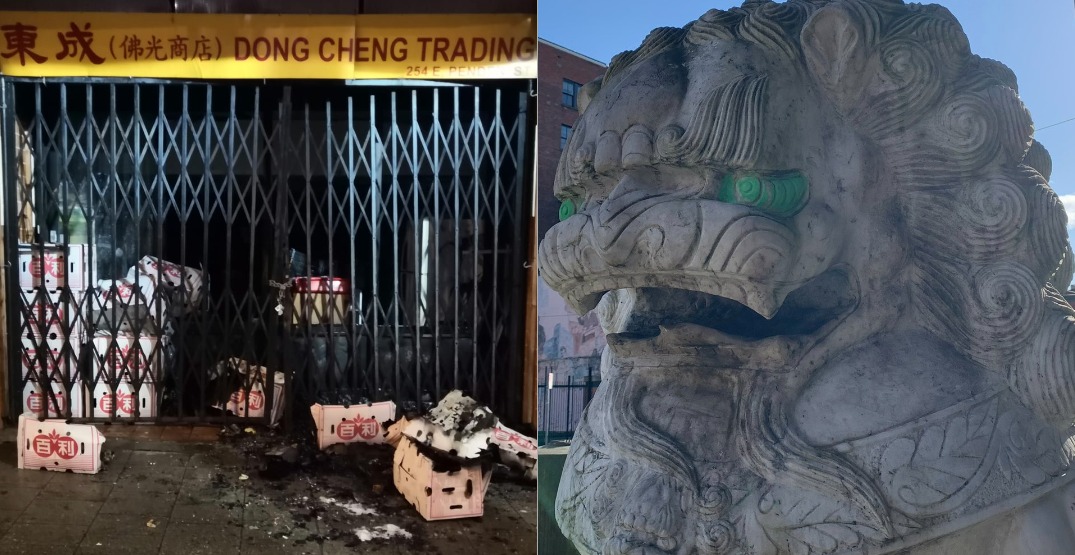 The rising vandalism and arson in Chinatown can’t be reduced to one single issue, community leaders and authorities in the neighbourhood say.

Instead, they say the situation is being fuelled by a toxic combination of anti-Asian racism, a lack of social support for unhoused and transient people, and untreated drug use.

Three fires were set within hours of each other early in April, and the Chinese Cultural Centre was vandalized in March.

It certainly wasn’t the first time the centre was targeted, and it has fallen victim to not only graffiti, but also broken windows, dumps of garbage, theft, and more.

Also in March, the Chinatown Business Improvement Area said it was spending about half of its budget on district security to reflect the spike in crime.

In an email to Daily Hive Urbanized sent on April 12, the City of Vancouver stated it recognized and values Chinatown as an important part of Vancouver’s cultural identity. It also recognized that the area is facing an increase in graffiti and vandalism.

“The City acknowledges the disheartening impact this has had on residents, businesses, and visitors, and that rising incidents in Chinatown may in part be connected to the rise in racism towards Asian people in Vancouver,” the email said.

City staff have already put measures in place to help reduce the frequency of crime in Chinatown, but there’s still more to be done, according to businesspeople who work there.

In 2020, the City worked with the community to identify a list of priorities for the area, and Council committed more resources to expand cleaning to Chinatown in 2021 and 2022.

“Council also directed staff to come forward with recommended actions to combat anti-Asian racism and racism generally; a preliminary interim report will be presented to Council this spring,” said the email.

The City already has a group dedicated to focusing on revitalization in Chinatown called the Chinatown Transformation Team (CTT). It’s overseen by a Council-appointed Legacy Stewardship Group of community representatives.

And the CTT partnered with Embers to establish a Chinatown Community Stewardship Program, which the City says “has received great feedback from businesses and residents in addressing issues on the streets in Chinatown.”

Groups like Goodbye Graffiti are also occasionally enlisted to help remove spray paint from structures like the lions at the gates of Chinatown.

What could be done next

Lowe has been working and living in Chinatown for years and says the “targeted anti-Asian vandalism” isn’t new to business owners there.

Does everyone not want to address the elephant in the room? Please help save our #chinatownyvr. Not addressing the obvious is hurting our community. #vanpoli please at least have a discussion & not ignore this. https://t.co/Jx4Ig4iJgg

It’s just “an extra hurdle” they have to jump while already struggling to survive the pandemic — and as a result, slower foot traffic in the area — she says.

Lowe, along with Chinatown business owner Peter Lau and members of the City of Vancouver and Vancouver Police Department, says it will take a multi-pronged approach to start creating change.

Const. Tania Visintin with the Vancouver Police Department agrees that the issue of crime in Chinatown is far from straightforward. So far, VPD has upped the number of officers patrolling there, but she says they can only do so much alone.

This was last night East Pender in front of Mah Wah Hotel at apprx 10:20pm. #vanpoli #chinatownyvr. It is becoming more apparent daily that these incidents happening (going unreported) are targeted towards our neighborhood already struggling. pic.twitter.com/QRlVIDhPkh

Visintin says the police will need help from the City, the public, and the force’s other partners — like BC Housing — to help make people there feel safer and more secure.

“It’s a mixture of things. Mental health is a factor. Drug addiction is a factor. Homelessness is a factor. It’s a complex issue that didn’t start overnight, so it can’t be fixed overnight,” she said.

“We are working with our partners, with businesses in that area on basics like how to provide better security for businesses, whether that be lighting or cameras or having extra patrols in that area.”

Arson, property crime and assault is normal for those who seek to keep this cycle of poverty in motion

A more temporary fix would be providing an even heavier police presence in the area, which Lowe says is making a difference in her community during the day. But she thinks more late-night patrols are still needed.

It might also help to make it harder to get spray paint, or to make it easier to identify the people who bought it recently by demanding purchasers provide their ID at check-out, she adds.

In addition, Lowe would like to see more support for mentally ill people living in her neighbourhood.

Some of the offenders she’s seen need housing and full-time mental health support, she says. Giving them the support they require would make the longest-lasting difference in her eyes.

Pete Lau, a business owner in Chinatown, agrees. He started a physical petition to stop vandalism by graffiti in Chinatown earlier this year.

“It’s getting a little bit scary these days,” he said. “The arson, it’s getting more worrisome.”

Racism is part of his concern, since he says, “Asian shops tend to have more issues than non-Asian shops,” adding ones with English on their storefronts are usually left alone.

He says many of the homeless people around his business five to 10 years ago were older and relatively peaceful compared to the people committing crimes in the area now.

“Those people we don’t see around much anymore. The people we see are much younger, and they tend to be much more violent,” explained Lau.

“These people have mental issues, they have no place to go now … so they go to Gastown and Chinatown.”

He echoes Lowe’s and Visintin’s point about the importance of adequate social support for those individuals.

“Racism is an element. I wouldn’t say it’s 100% racism. Part of it is homelessness. The other part is a drug issue. And the other part I’m questioning now, is are we putting the money in the right places, the right programs?” he said.

Safe supply isn’t enough to fix the issue on its own, according to him and Lowe. It will take a combination of that, low-income and accessible housing in Vancouver, improved security for businesses, more foot patrols, and even more solutions to make a difference, they say.

Can Van City Council and #VPD deploy many more community police officers NOW to be on the beat day and night to slow the crime spree, so people are safer going to Chinatown and downtown Vancouver? Urgently needed and the least they can do to help! #SaveChinatown #SaveVancouver

He seeks policing as “the end solution,” not the sole solution.

“Police can discourage things from breaking things, breaking in … but you have to have that prevention upfront so we don’t have so many police on the back-end,” he said.

In the meantime, the Vancouver Police Department is asking the public to report any vandalism, arson, or other crime they see around Chinatown.