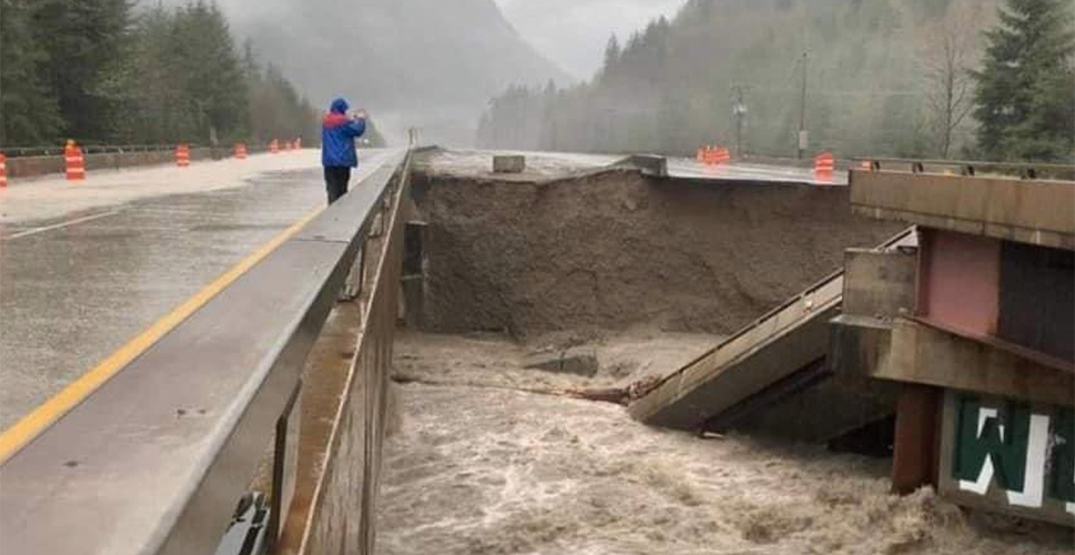 A massive rainstorm in BC that’s already caused major flooding and mudslides has now washed away whole sections of one of the province’s major highways.

Parts of the Coquihalla Highway were impassable as of Monday because sections of pavement had been ripped away by running water.

DriveBC shared video of a section between Larson Hill and Juliet showing several lanes that had washed into the river.

Southbound lanes of the #Coquihalla between between Larson Hill and Juliet. The lanes have been washed into the river.
Check @DriveBC for the latest info on #BCHwy5 and other highways impacted by the recent heavy rains. https://t.co/0sq39Ad5WN pic.twitter.com/X7HLUC5ZsC

A witness shared photos of the muddy riverbank where sections of the asphalt had fallen.

Others on Twitter shared photos of a section of the Coquihalla near Othello Road that had broken off into the rushing water, and compared it to Google images of the same stretch of road when it was still intact.

Mudslides also made other sections of the Coquihalla treacherous, and as of 1:15 pm DriveBC said Highway 5 was closed between Hope and Merritt.

Driving conditions may get worse on Highway 5 before they get better. Environment Canada is calling for 15 to 25 centimetres of snow on the Coquihalla on Monday night along the section between Hope and Merritt.

“The heavy rain will begin to transition to snow this afternoon as a cold front crosses the region and snow levels drop,” the weather agency said. “Snow will quickly accumulate tonight with up to 25 cm possible by midday Tuesday. Strong and gusty southwest winds may also reduce visibility due to blowing snow.”

An entire chunk of the Trans Canada Highway near Lytton was also washed away, and the BC Ministry of Transport shared aerial photos of it on Tuesday. The government has not yet said when the highways might be repaired.