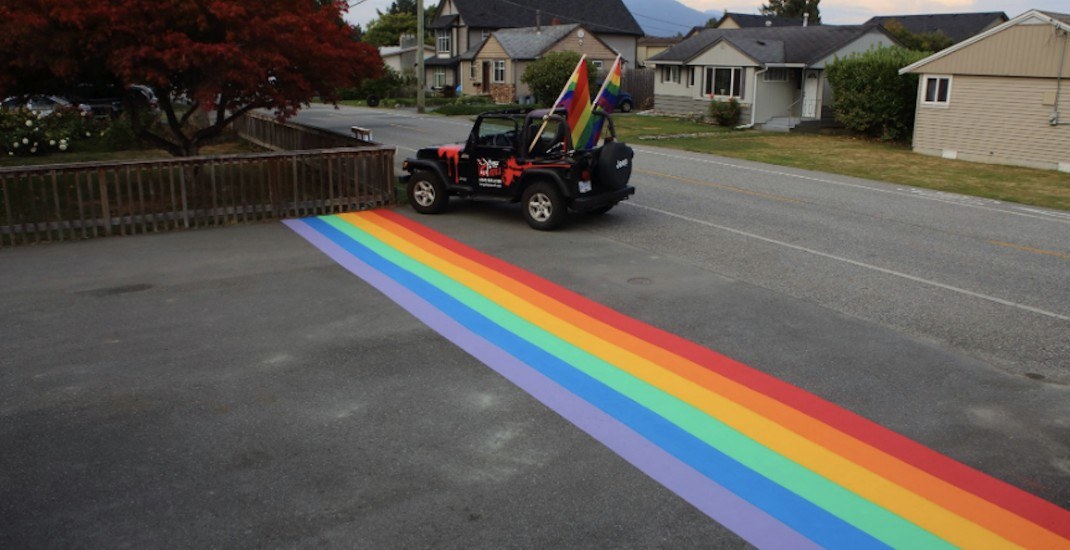 A Chilliwack man and his family added a splash of colour to their driveway to show solidarity with the city’s LGBTQ community.

Marty van den Bosch painted his own rainbow walkway outside his home after last week’s Chilliwack council decision, striking down a request to paint a rainbow crosswalk in the downtown district to support the LGBTQ community.

Several city councillors took time to defend their position, stating that painting a crosswalk was “divisive” and a “political statement” that was “not an appropriate use of taxpayer’s dollars.”

Van den Bosch said council’s decision left him feeling disappointed, especially since many residents had rallied in support for the crosswalk.

“I was just really disappointed that the city didn’t even give an opportunity for dialogue,” he told Daily Hive.

So, he decided to take matters into his own hands.

“Our local First Nations here… they took it upon their own initiative to paint their sidewalks on their private landing at Eagle Landing,” said van den Bosch.

“And I thought hey, you know, I have private property and we have a large, wide sidewalk.”

Last week, van den Bosch and his wife Kristy painted a 38-ft-long rainbow crosswalk on their own property, with the help of their friend Lorna Seip, a member of the LGBTQ community who owns a painting company.

“And I know there’s potential risk and potential pushback and, you know, potential vandalism and we’ve had none of that. We’ve had almost all positive feedback and it was a little minor amount of negative feedback,” he said.

For van den Bosch, the bright rainbow crosswalk outside his home represents his allyship with the community.

As for city council, van den Bosch wishes they would have given supporters of the rainbow crosswalk alternative options.

“I would say if we can’t have the sidewalk, [they could] present us with options that would be acceptable […] tell us what you will allow us to work with. That’s it,” he said.

“Show some support for the three to five per cent of your community that works here, lives here, and loves here, you know? I don’t think it’s a big ask.”