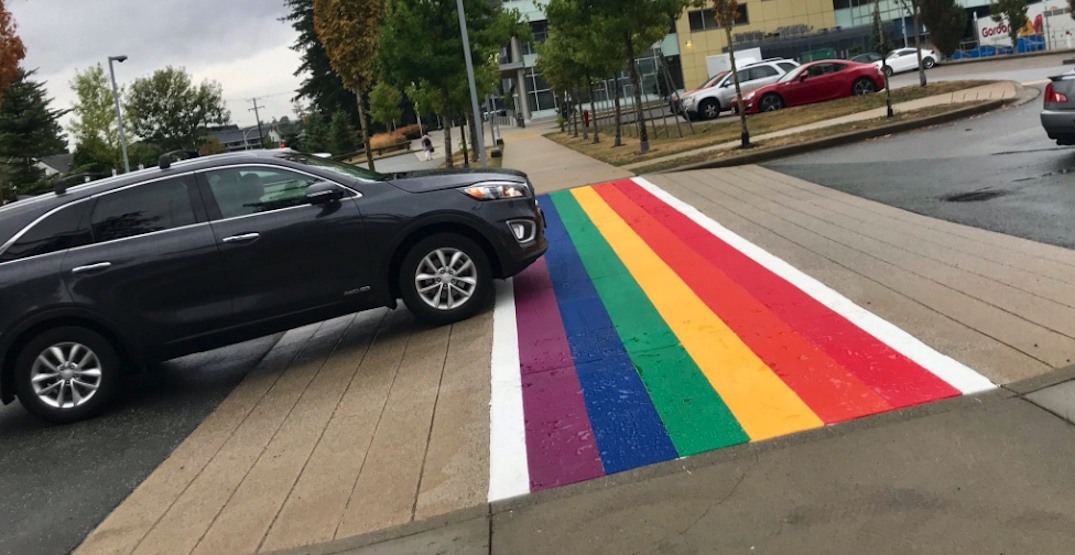 Just in time for the start of the new academic year, the school district of the City of Surrey has installed a permanent rainbow crosswalk at its head office, making it the second LGBTQ rainbow crosswalk in the municipality.

Installation work on the crosswalk, located in the parking lot of the District Education Centre at 14033 92 Avenue, began early this week and was completed today.

Well, that brightens up this grey day! Check out the newly painted crosswalk at our District Education Centre 🌈 #sd36learn #surreybc #inclusionmatters pic.twitter.com/vZdzzMW2Q9

School opening preparations in earnest! @Surrey_Schools Board Office gets #pride sidewalk. Big thanks to all who made this a reality. #sd36learn #surreybc Looking forward to final product for our opening meetings this week. pic.twitter.com/F6NJ2N6ejN

This follows the municipal government’s permanent rainbow crosswalk installation in June 2018, painted at the intersection of Old Yale Road and University Drive near Holland Park.

Repairs were made to the crosswalk days later after it was vandalized with splashes of white paint.

Since the first installation in Surrey, rainbow crosswalks acknowledging and celebrating the LGBTQ community have been popping up across the region.

Since spring, permanent installations have also been made in Port Moody, Richmond, and Burnaby, which plans to eventually create four rainbow crosswalks — one for each of its town centres.

A rainbow crosswalk was also unveiled at the intersection of Lonsdale Avenue and 14th Street by the City of North Vancouver last week.