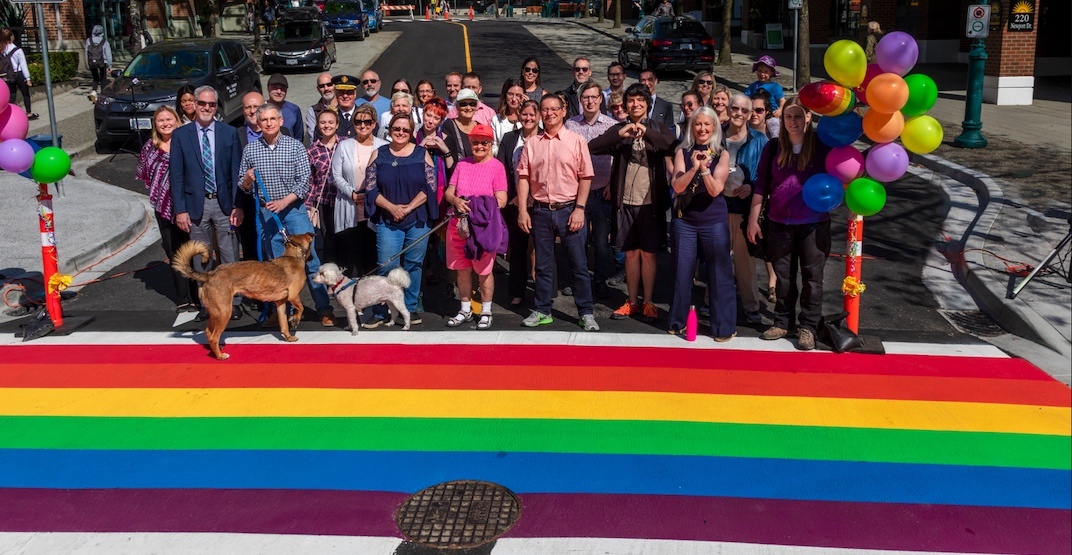 Unveiling of Port Moody's LGBTQ rainbow crosswalk at the 200 block of Newport Drive on Tuesday, April 30, 2019. (City of Port Moody)

Another Metro Vancouver municipality has installed a new rainbow crosswalk to acknowledge and celebrate its LGBTQ community.

The City of Port Moody unveiled its very own rainbow crosswalk at the 200 block of Newport Drive on Tuesday. It uses the common six-colour stripe design and has been painted with methyl methacrylate resin — a durable and highly skid-resistant material with a high level of colour stability.

This installation was a small component of the municipal government’s Newport Drive Crosswalks Improvement Project, which involves installing curb extensions with raised crosswalks along the length of Newport Drive between Ioco Road and Ungless Way.

According to the city, such upgrades improve traffic safety and accessibility for all road users through shortened crossing distances, improved visibility for pedestrians, traffic calming, and improved sight lines for drivers and cyclists.

The entire street improvement budget was $337,000, including $13,000 for the installation of the rainbow crosswalk. A $40,000 portion of the cost was funded by TransLink.

“The rainbow crosswalk is a symbol of pride and acceptance for the LGBTQ2+ community,” said Port Moody Acting Mayor Meghan Lahti.

“It’s also a symbol of diversity and the strength we gain when we all stand together and support each other. With the installation of this crosswalk, we’re sending a clear message that Port Moody is an inclusive community where everyone is welcome.”