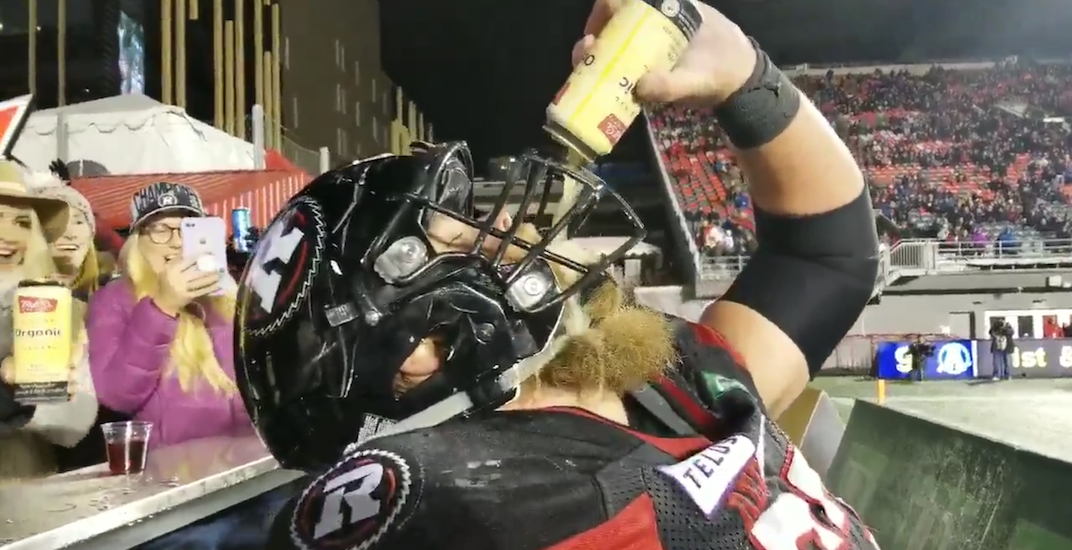 It was arguably the greatest touchdown celebration of all-time.

After Mossis Madu ran into the end zone to give the Ottawa RedBlacks a 23-9 lead in the final game of the regular season at home to the Toronto Argonauts on Friday, Canadian offensive lineman Jon Gott went viral.

The 33-year-old CFL veteran saw his girlfriend in the back of the end zone with a tall can of Mill Street Organic Lager and well, he was thirsty, so… She handed it to him and he pounded it back.

Time for a cold one.

In a move that would have made “Stone Cold” Steve Austin proud, with cameras watching, Gott downed the beer before crushing it on his helmet.

With another quarter left to play, it was certainly a brave move by Gott – who rightly felt confident in his team’s chances to win the game against the worst team in the CFL. The touchdown and ensuing convert ended up being the final points scored in the game.

As it turned out, Gott has been planning this move for a while.

“I’ve been talking about it for probably five years now, and I finally pulled the trigger. Saw that beer, chugged it, and crushed it over my head. And that was about it.”

Jon Gott-a-beer, Stone Cold Jon Gott has a message for #CFL: This is how they have fun in Ottawa. #RedBlacks @CFLonTSN @REDBLACKS @TSN_Sports pic.twitter.com/cqs5E4iG21

The CFL relaxed rules around touchdown celebrations this season to allow props, so Gott was not penalized, fined, or suspended. He was following the rules, which is why the league made an amendment to them on Monday.

Here’s the full statement released by the CFL, explaining the rule change:

Football is a game and for our fans it is a source of entertainment. It should be fun. That is why we amended our on-field celebration policy this year to, among other things, allow the use of props.

When a player celebrated a touchdown this weekend by drinking a fan’s beer, he was acting within that policy and no discipline was mandated.

However, the situation prompted several discussions with our clubs which indicated concern there is a risk that repeated celebrations featuring alcohol, or for that matter drugs, could send the wrong signal about our players, especially to young and impressionable fans.

To put it simply, to have this happen once may, for many people at least, have been fun and even funny. But to have it happen again and again, and possibly include other substances, was not in the best interests of the CFL or the communities it calls home.

Gott and the RedBlacks have next week off while they await their opponent in the Eastern Final. The CFL playoffs begin on Sunday with the West and East semi-finals.