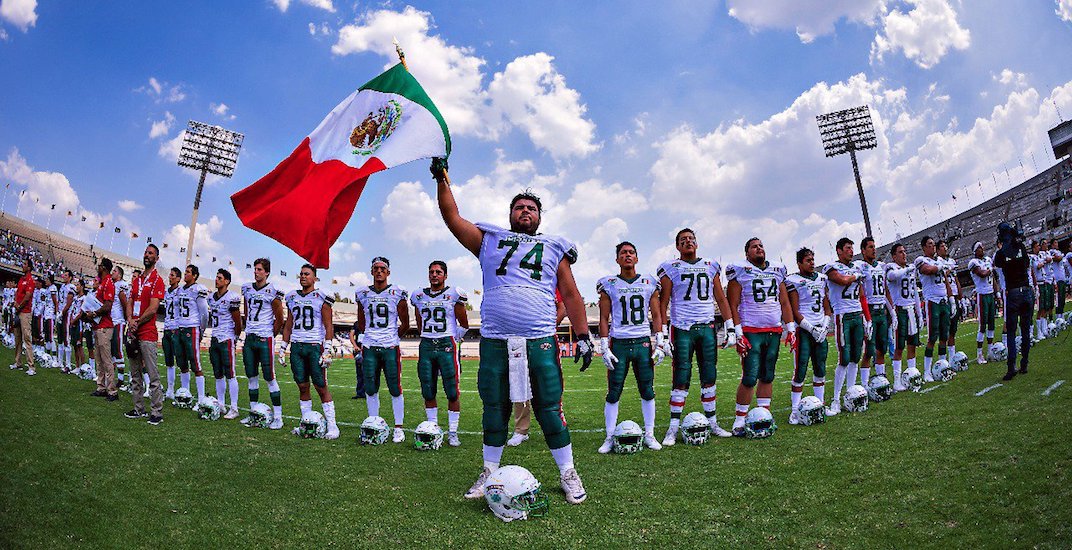 How do you say “rouge” in Spanish?

Someone might have to figure that out, as the Canadian Football League is reportedly looking into playing two regular season games in Mexico for the first time ever next season.

I’m told that there is a very real possibility the @cfl will play 2 regular season games in Mexico next season. And those wanting to bring the games there are convinced there will be 45-50k in attendance. @CFLonTSN @TSN_Sports

TSN insider Farhan Lalji broke the unusual news on Twitter Friday afternoon, adding that the people that want to bring CFL games to Latin America believe they could attract between 45,000 and 50,000 people per game – much higher than the league’s average attendance.

Football (the North American kind) has grown considerably in Mexico in recent years, due to the popularity of the NFL. There are an estimated 40 million fans of American football in Mexico.

Mexico City will host a regular season NFL game for a third straight season later this month. They also now have a semi-pro league, the Liga de Futbol Americano Profesional (LFA), which began play in 2016.

CFL commissioner Randy Ambrosie met with the CEO of the LFA earlier this year.

“North American-style football has an international presence. And so should the Canadian Football League,” Ambrosie said in June. “Our brand of football – with our wide field, lightning fast pace of play and high-octane offences – deserves its place on the international stage.”

How Mexicans will take to the Canadian game is yet to be seen, but Ambrosie clearly isn’t afraid to think outside the box.

“There is an opportunity here to reach millions of new fans and, in the process, deliver the meaningful international broadcast or streaming agreements that can help build a bigger, stronger, better CFL.”

The CFL last played games outside of Canada during American expansion when seven new teams entered the league during the mid-1990s. It was short-lived. Placing teams in Sacramento, Las Vegas, Baltimore, Shreveport, San Antonio, Birmingham, and Memphis – only Baltimore had any measure of success.

Halifax and Quebec City are the only cities that have recently garnered any kind of buzz for a future CFL expansion team.