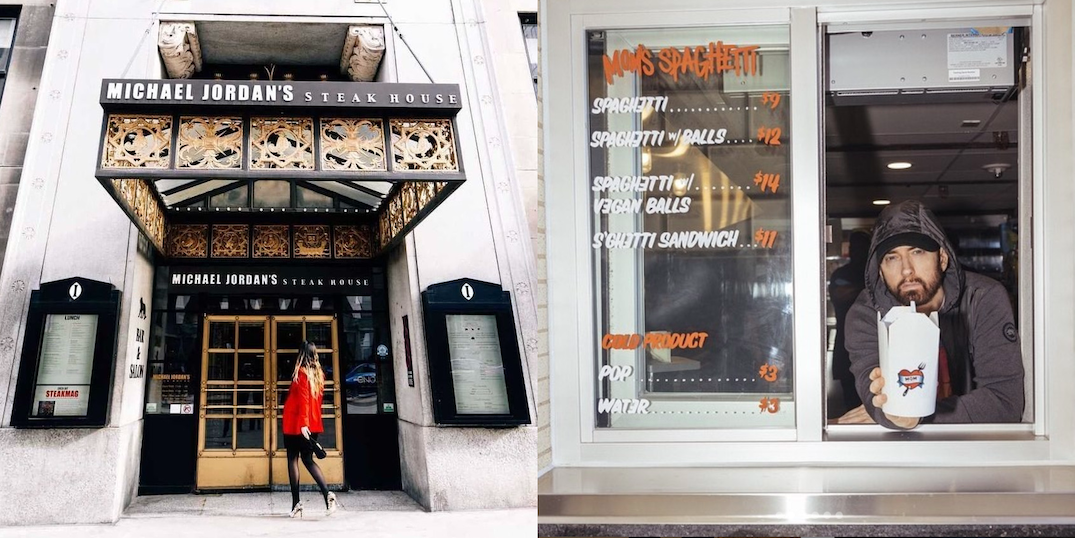 All around the US, celebrities open and conceptualize their own restaurants that become local staples and fun destinations for fans.

Although Canada has plenty of celebrities to brag about, it seems that we are still left wishing that some of these restaurants weren’t across the border.

Here are some celebrity-restaurants owned restaurants that we wish were in the Great White North.

“His palms are sweaty, knees weak, arms are heavy. There’s vomit on his sweater already, mom’s spaghetti.” Despite being a song that is nearly 20 years old, the lyrics of “Lose Yourself” by Eminem have remained iconic and resonated with listeners of all ages.

Now, the legacy of “Lose Yourself” continues as Eminem has opened a restaurant in downtown Detroit named after the renowned pasta titled Mom’s Spaghetti Shop.

In an effort to keep things simple, the new pasta spot only offers three menu items: Mom’s Spaghetti for $9, Mom’s Spaghetti with Meatballs for $12 (there is also a vegan option for $14), and a ‘Sgetti Sandwich, spaghetti on bread, for $11. During their opening on September 29, Eminem himself was seen passing out spaghetti to diners through the take-out window.

If you get a chance to visit Mom’s Spaghetti Shop, hopefully, it agrees with you better than it did with Eminem in 2002.

Legendary skateboarder Tony Hawk has teamed up with esteemed SoCal chef Andrew Bachelier to create Chick N’ Hawk, which is set to open in Spring 2022.

The eatery will focus on hot chicken but also serve seafood and ceviche, which San Diego is in well known for. The playful name is a tribute to the Looney Tunes’ famous Foghorn Leghorn character and pairs well with the fried chicken trend taking the world by storm.

According to Eater San Diego, the space is 1,500 square feet, newly remodelled and features new patios and a bar with full-service dining. Hawk intends to decorate the space with a surf and skateboarding theme, of course.

It may come as a surprise that the iconic athlete is involved in the restaurant business, however, he is actually an investor in several eateries in the San Diego area including Animae, Herb & Sea, Market Del Mar, and Steel Mill Coffee, according to People. The combination of skateboarding, sunshine, and fried chicken seems like a pretty rad combo to us.

The beer selection spotlights an array of local varieties, including those from local favourites as well as styles from up-and-coming craft breweries. The Southern comfort food boasts classics like battered catfish, but with a Ludacris-approved twist.

The feel-good eatery is actually in the airport, so if you ever have a connection in ATL you’ll be able to try some fried chicken and maybe even spot Luda!

Criss Angel is considered to be one of the best magicians and illusionists in the world. Now instead of blowing your mind, he is trying his hand at making mind-blowing pizza.

Located 45 minutes off of the Las Vegas strip, Angel’s restaurant serves breakfast, lunch and pizza which is summarized in the “blp” part of its name.

This area of Nevada is known for bikers, cowboys, and even aliens, so if you stop by Cablp the next time you’re in Sin City you might get quite the show (and not necessarily from Criss Angel).

It’s no surprise that the hip-hop king of New York, Jay-Z, has left his mark on the Big Apple’s buzzing restaurant and lounge scene.

As expected, the venue hosts many events and private parties. While watching a sports game on one of the countless TVs, you can order from the lounge’s menu which consists of wings, sliders, dips and more.

Olivia Culpo has many claims to fame including winning Miss America in 2012, modelling, and dating plenty of Hollywood’s elite. Now, she is adding “restauranteur” to her resume in her home state of Rhode Island.

Back 40 is a cozy eatery that serves American comfort food and is co-owned by members of Olivia’s family, as her dad Joe Culpo has an extensive background in the restaurant industry. The building has been designed to feel like a restored barn and opened in 2017 with plenty of fanfare.

As if being a six-time NBA Champion, five-time M.V.P, two-time Olympic Gold Medalist wasn’t enough, “His Airness” Michael Jordan didn’t shy away from trying a new business venture off the court. He opened his first steakhouse in 1998 and now has locations in Washington State and Connecticut, in addition to locations with other bars and culinary concepts.

The downtown Chicago restaurant has a warm, classic ambiance clad with red leather seats and lots of dark wood detailing.

Leave it to Pharrell to create a baby pink Miami dreamland. Swan is located in the heart of the famous Design District with a gorgeous indoor/outdoor design, pastel colours, big palm leaves, and vibrantly coloured cocktails.

Swan’s menu is centred around seasonal and market-driven ingredients, that bring bold flavours to the forefront of the guests’ dining experience. The menu features refined rustic cuisine and dynamic communal plates.

Understandably, this restaurant has quickly turned into an Instagram hotspot and also a magnet for celebrities. This is definitely a must-visit if you are ever in Miami!

Inspired by classic New York establishments, The Polo Bar offers a casual yet refined setting for food and drink in the heart of Manhattan.

Expect classic American dishes such as a crispy chopped salad and beef from Ralph Lauren’s Double RL Ranch in Colorado, which is offered at select times throughout the year.

RPM is a group of restaurants from celebrity couple Bill and Giuliana Rancic and siblings R.J., Jerrod and Molly Melman. RPM Italian is modern in approach and Italian in spirit and features a contemporary, chef­-driven menu with dishes meant to be shared.

Giuliana and Bill are largely regarded as a celebrity power couple. Giuliana is a co-anchor of E! News and staple red carpet host for Hollywood’s biggest award shows. Her husband Bill is also a television personality and best-selling author.

Staying true to Giuliana’s Italian heritage, RPM has an authentic wood-fired pizza oven and house-made pasta. Locations can be found in downtown Chicago, Washington, DC, and most recently the Chicago waterfront area.

Country music star Dierks Bentley is the owner of Whiskey Row, a well-known gastropub and staple in Nashville’s nightlife that boasts an impressive lineup of country musicians.

The menu consists of classic southern pub food including beef burgers, chicken and waffles and sliders. The iconic location on Broadway makes this celebrity-owned spot consistently packed and a favourite stop for bachelorette parties!

Locations are also in Scottsdale and Gilbert, AZ  in addition to the original in Nashville, TN.

A post shared by Walton’s Fancy and Staple (@waltonsaustin)

This beautifully curated and trendy one-stop-shop is owned by Oscar-winning actress Sandra Bullock. Perhaps the most unique thing about this celebrity-owned restaurant is that it is much more than that; it is also a florist, deli, bakery, caterer, boutique and coffee shop.

The Blind Side opened Walton’s Fancy & Staple in 2009. A once-neglected building, it is now chic and rustic with exposed brick and aged wooden beams. Classic southern dishes include biscuits and gravy as well as shrimp ‘n’ grits.