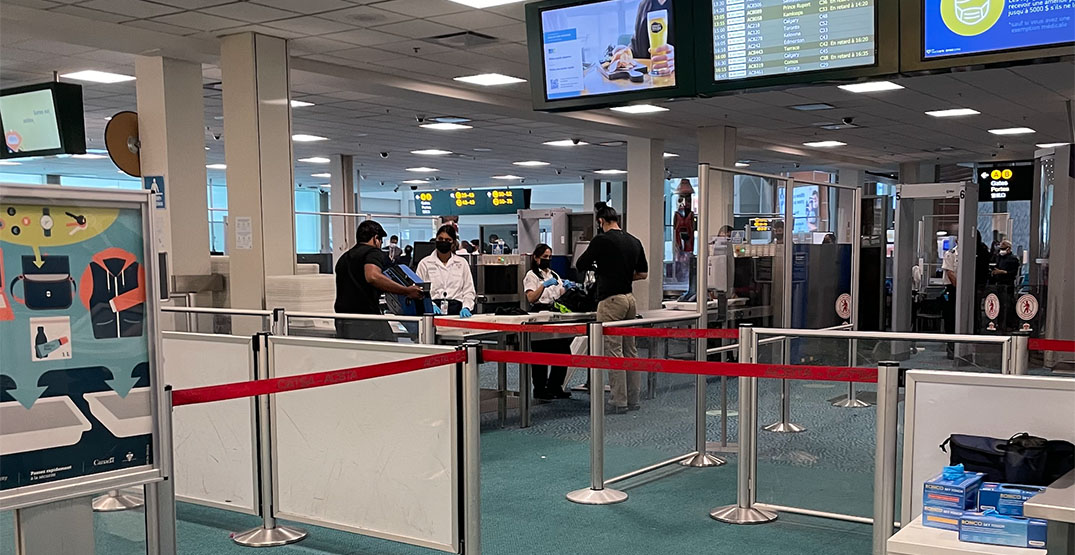 Security screening officers at Vancouver International Airport have a new incentive to show up for work this summer and keep lineups moving: a bonus from their employer for perfect attendance.

But some employees and the union say the new attendance bonus is unfair because it doesn’t honour leaves protected under labour laws. Instead, they want the company to pay employees more across the board.

Allied Universal, a third-party company contracted by the Canadian Air Transport Authority to staff security checkpoints at YVR, introduced the new bonus without consulting the union, according to a June 10 letter from the International Association of Machinists and Aerospace Workers.

An employee at YVR told Daily Hive Urbanized the bonus is $200 per week plus $500 per month for staff who go the entire time without calling in sick, arriving late, leaving early, going on vacation, going on parental leave, or going on bereavement leave.

The union argues compassionate or bereavement leave should not disqualify employees from getting the bonus.

“It is shameful that CATSA, a Crown Corporation, would not even consider compassionate or bereavement leave, two of many recognized leaves under labour law, as time worked toward the criteria,” the union said.

“No agency should consider itself above the law, and be permitted to trample on basic protections set out in legislation.”

The union noted Allied told them the bonus program is funded by CATSA and is discretionary — making it not subject to the Canada Labour Code and outside the collective agreement.

The union said a raise to wages would have been a more appropriate and fair use of the federal funds.

Right now screening officers at YVR are paid $18 to $22 per hour, which puts many below the Canadian Centre for Policy Alternative’s living wage in Metro Vancouver of $20.52 per hour.

CATSA told Daily Hive the program is national, and it gave money to its three contractors to distribute to staff. The federal agency said it chose an attendance incentive program instead of a wage raise because the program is using finite funds.

“This is a temporary measure to address higher absenteeism during summer months,” Suzanne Perseo with CATSA media said.

The bonus program is not meant to address labour shortages — since several airports have already met summer hiring targets.

“In all cases, when screening officers take paid sick leave or planned vacation during a given week, they are still eligible for the incentive pay in future weeks during which they attend all their scheduled shifts for that week.”

CATSA staff at airports across the country have been speaking out about poor working conditions this spring as traveller volumes rebound with COVID-19 restrictions lifting. Many airport workers were laid off during the pandemic, and the fraction that are left were trying to handle pre-pandemic passenger loads.

Workers rallied at YVR last month for higher pay and less stressful conditions — some current and former employees told Daily Hive Urbanized that they’ve had to delay their bathroom breaks because there aren’t enough qualified people on the line,

One YVR security screener, whose identity Daily Hive Urbanized is keeping confidential to protect his employment, said new recruits are being put on the security line without getting clearance from Transport Canada. In addition, their training has been expedited to 40 hours instead of the usual 100 hours.

CATSA said that decision was to help lines move faster.

“In order to assist with the flow of passengers through the screening checkpoints as passenger volumes increase, we have been placing pre-certified screening officers in the screening queues and on the screening lines in non-screening functions to optimize resources,” Perseo said.

Daily Hive Urbanized has reached out to Allied and the union for comment.