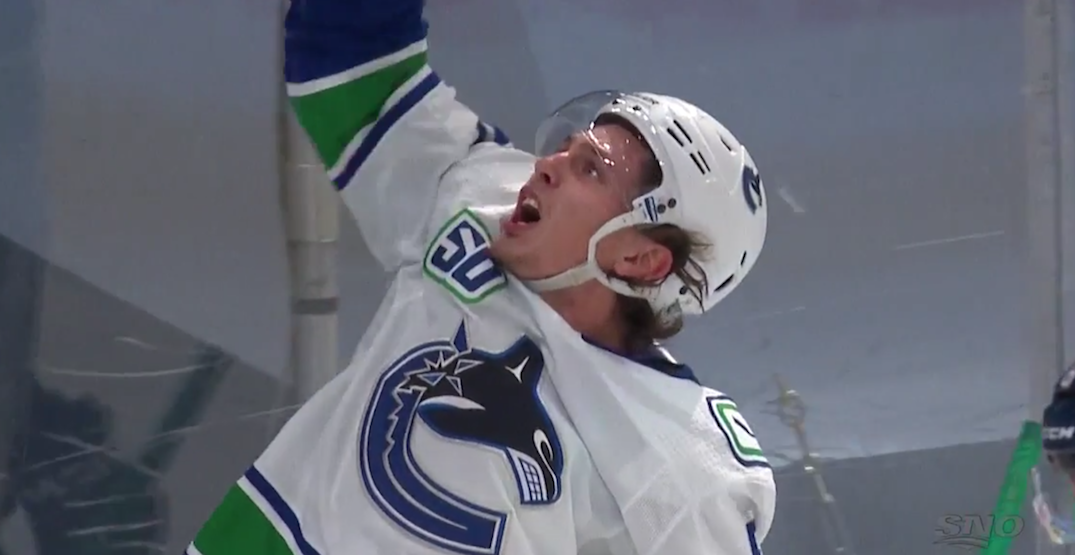 The Vancouver Canucks are officially back in the Stanley Cup Playoffs, and they appear ready to make some noise.

The Canucks didn’t look out of place against the defending Stanley Cup champs in Game 1, beating St. Louis by a 5-2 score in a game that proved this team is not going to be an easy out.

With the game knotted at two in the third period, it was Richmond native and fan favourite Troy Stecher scoring the game-winning goal — the first playoff goal of his career.

It was a beautiful moment for Stecher, who candidly celebrated with a salute to his late father, who passed away on Father’s Day.

That one was for you, dad. 😢💙💚 pic.twitter.com/NnxUrb90ef

“I miss my dad every day,” Stecher said after the game. “It was a big goal at a crucial time in the game. I had a couple seconds there to reflect on my dad.”

Elias Pettersson, who scored the second goal for the Canucks, was there to embrace Stecher after he scored.

“I saw the celebration and wanted to go congratulate him,” Pettersson said. “What Troy had to go through in the summer was devastating. I just wanted to go hug him.”

Horvat scored an insurance goal just a few minutes later, making a beautiful move to score one of his two goals in the game and give the Canucks a 4-2 lead.

JT Miller added a fifth tally in the final minute of the game, the third power play goal of the game for the Canucks.

Some clinical passing on the PP for the #Canucks as Miller puts the #STLBlues away late in the game. pic.twitter.com/Zx9Ecq6qry

Bo Horvat opened the scoring 4:29 into the first period, beating Jordan Binnington with a shot from the bumper position on the power play to give the Canucks an early lead.

David Perron would tie the game for the Blues with a power play goal of their own before the period was over.

The Canucks regained the lead in the second period with another power play goal thanks to Pettersson.

Pettersson and Hughes were the focus of the Minnesota Wild in the qualifying round, and Game 1 against the Blues was no different. It was a physical bout and the Canucks did well to match the intensity of the Blues.

Some sneaky crosschecks and facewashes from Perron on Hughes #Canucks pic.twitter.com/3SvXaUuXHg

The Canucks will need Jacob Markstrom to outplay Binnington to win this series, and that’s exactly what happened in Game 1. Markstrom made 29 saves and was perfect in the third period to help the Canucks secure the win.

Jacob Markstrom you are a bad man 😱 #Canucks pic.twitter.com/WW5GvOXJn4

There wasn’t much to criticize about the way the Canucks played on Wednesday. All of their lines played well, their power play produced, they played very well defensively and when they didn’t, Markstrom was there to make the saves.

This was a statement win, and the Canucks put the defending champs on notice with a powerful Game 1 performance.