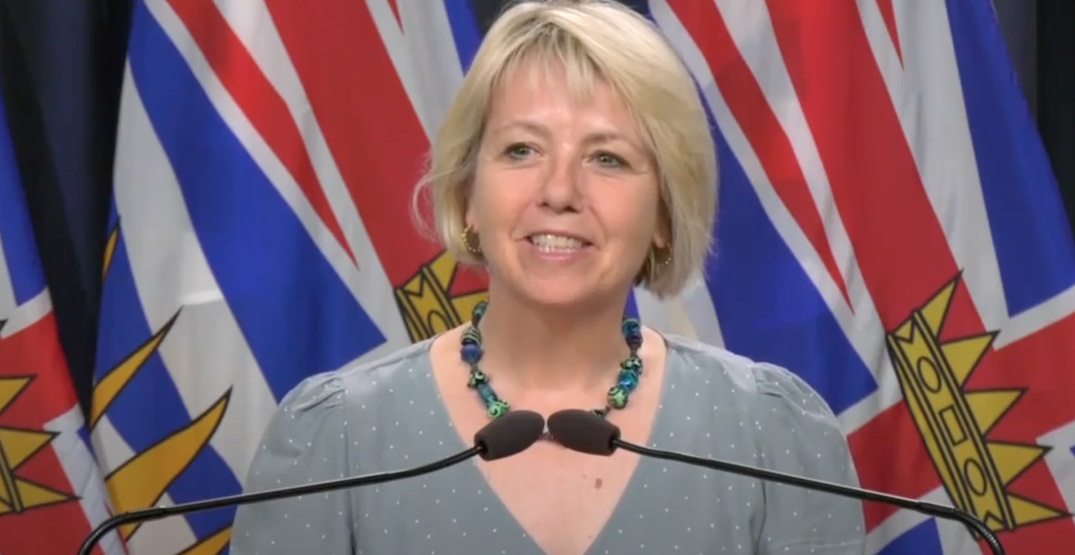 With the Vancouver Canucks set to make their first appearance in the Stanley Cup playoffs in five years, BC Provincial Health Officer Dr. Bonnie Henry provided advice to fans on how to watch the games in a responsible manner.

But first she threw some shade at the Toronto Maple Leafs, in the most Dr. Bonnie way possible.

“I was very happy to see the Canucks (make the playoffs), (I was) just lamenting to my colleagues who are Leafs fans — sorry,” said Dr. Henry, cracking a wry smile. The Toronto Maple Leafs, of course, were just eliminated from contention on Sunday in soul-crushing fashion.

Ok, back to business.

For those who can remember what the playoffs are like when the Canucks are in them — it’s been a while — fans are used to congregating in large groups in bars, restaurants, or at friends’ homes. And when the Canucks do well, they’re often accompanied by shouting, high fives, and hugs.

Clearly during a pandemic, this is problematic.

Dr. Henry’s advice for fans was consistent with her advice for most social activity during the pandemic: fewer faces, bigger spaces.

“This is the year that we can celebrate the Canucks with our close friends or outside on a patio with a small group. And we can do that in broad places all over the province rather than just small crowded places here and there,” said Dr. Henry.

Bars and restaurants will be showing the games, but the usual Phase 3 rules will be in place, with a maximum of six people allowed to sit together at one table.

“We need to bear in mind that bars and restaurants have restrictions in place for the protection of all of us — their staff and the patrons — so that it’s safe for all of us to go to work, for people to enjoy their time there. And they will be, I am sure, looking at how they can safely maximize small groups of people in those settings to celebrate if and when the Canucks keep going.

“But let’s do it together. Let’s do it with our best friends in a small group outside. How often can we celebrate hockey playoffs in the summer? So let’s make it a special time this year to do it outside with our small groups of friends.”

The playoffs begin for the Canucks on Wednesday at 7:30 pm PT against the defending champion St. Louis Blues.