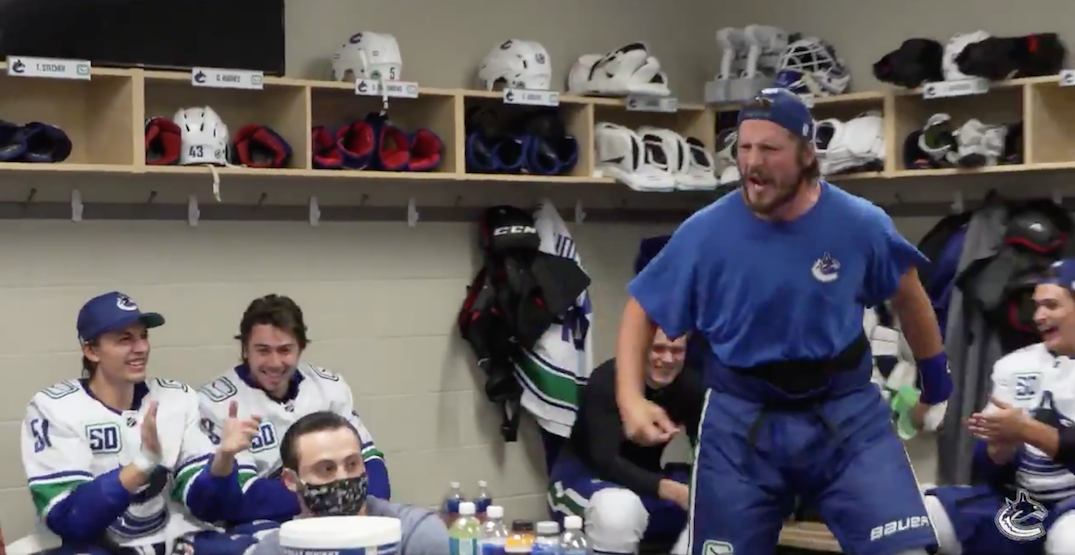 Among the biggest unknown elements coming into the pandemic playoffs was what games would look like without fans in attendance.

Would the Stanley Cup playoffs — well known for energy, intensity, and high-stakes drama — be missing something?

While everyone would still prefer to have fans at games, seeing how Vancouver Canucks players reacted to Chris Tanev’s series-clinching overtime goal should quash any doubts that the team isn’t all-in emotionally.

But but without 18,000 fans cheering for or against you, teams are having to manufacture a bit of their own energy.

The team wants to stay even-keeled in an up-and-down postseason, but they also need a jolt of energy once in a while too.

“It’s definitely important,” J.T. Miller said on Tuesday about the the need to manufacture energy. “You’ve got to find your own energy. Find your own momentum as a team.”

Players are cheering for each other on the bench, after goals, fights, big hits, and even blocked shots.

And they’re hyping each other up pre-game too.

The Canucks’ leading scorer during the regular season did that prior to Game 4, in what turned out to be the series-clinching game against Minnesota. With his experience in New York and Tampa Bay in the back of his mind, Miller brought the pre-game hype to the next level during the reading of the starting lineup card.

Cueing up the dramatic music, Miller announced the lineup like he was a ring announcer for the WWE.

“That’s the stuff,” said Canucks head coach Travis Green in an interview with TSN 1050 radio in Toronto. “I’m actually glad someone caught it on camera, because everyone talks about the business side and I really believe you gotta have fun too. You can’t make your players so tight, so nervous, that they can’t go out and play.”

Green said that players take turns reading the lineup card before games and that “if you win it, you keep going.” Needless to say, Miller will be reading it before Game 1 against the Blues tonight.

“It’s not usually like that, I’ve never seen them tee up the music and get it going like that,” Green added. “When I heard the music start to go, I’ll be honest, I started to laugh a little bit and was like ‘these sons of bitches, they better be good.’

“You don’t usually see the music start to blare. And I had a chuckle to myself. It was just the right time.”

Lucky for the players, they were good, outplaying the Wild for most of the game prior to the late-game heroics from Bo Horvat on the tying goal and Tanev on the OT winner.

“Trying to clinch a series isn’t easy and that puts nerves into your team as well, especially a young team,” Green added. “We talked about not being nervous in Game 4 and you’re going to be nervous when you’ve got a chance to clinch a series, so to see Millsy do that, it was good timing.

“He knows he has Game 1, so I don’t know if he’ll bring the music and everything again for Game 1 here but it wouldn’t surprise me — he’s a confident guy and he’s not afraid to speak out and do things like that.”

Naturally, Miller downplayed the big moment, and said he didn’t think it would become a regular occurrence.

“I’ve never really done one that big before but I felt like the time was right,” said Miller. “I just tried to bring a little energy to the game, it was our first time as this group to have an elimination game, so I figured it was a good time for it, and obviously you get kind of caught up in the moment.”

“I just thought it was time for a little oomph in the room for the start of the game. We felt pretty good after that.”

The Minnesota series was good warmup for the Canucks, who now face the task of playing the St. Louis Blues — a team with a similar playing style to the Wild — in the Round of 16. The Blues are a much more accomplished team, of course, as the defending champions who had the best record in the Western Conference during the regular season.

Green admitted that his team was a little bit nervous prior to Game 1 against the Wild, but his best players were much better after that. The nerves need to be gone now as they face-off against the Blues — a team the Canucks played well against during the season, with a 2-0-1 record.

“I think they’re more comfortable,” Green said during a media conference on Tuesday. “Anytime you win, that’ll help. Not to mention, the way we won. Losing the first game, bouncing back.”

“Our guys are feeling good about themselves, they’re excited to play the game, get going tomorrow, and I’m sure St. Louis is as well.”