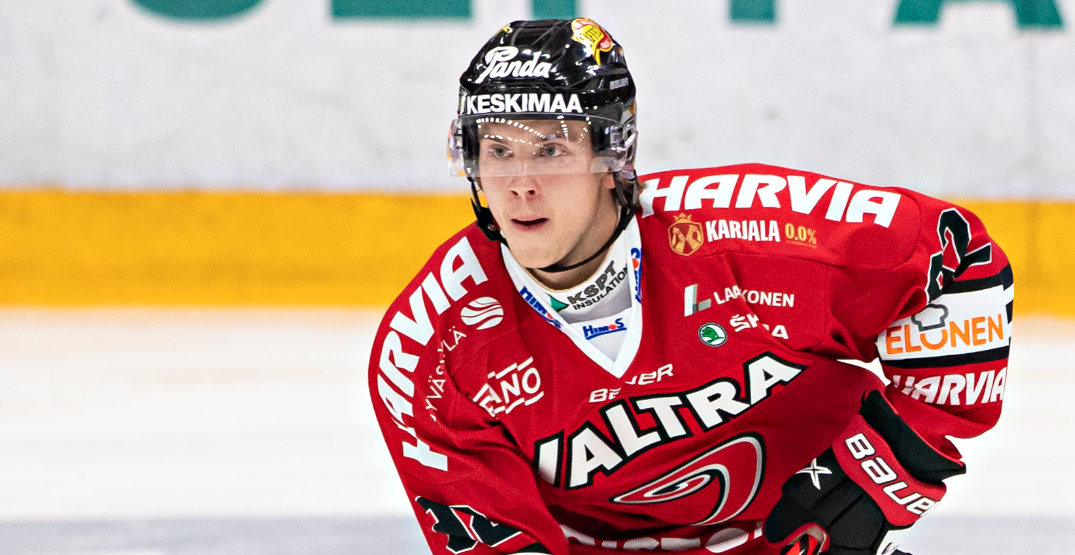 The newest member of the Vancouver Canucks will be introduced at the 2022 NHL Draft.

The time, date, and location is set. The name is to-be-determined.

The Canucks will pick near the middle of the first round in the NHL Draft, set for Thursday night at Bell Centre in Montreal and, while they’ll miss out on a true high-end, blue-chip prospect, there’s no shortage of intriguing options that could blossom into a key piece in Vancouver’s lineup in the not-so-distant future.

Here is a list of five candidates the Canucks could nab at No. 15 in the 2022 NHL Draft:

Brad Lambert, who had 10 points (four goals, six assists) in 49 Liiga games split between JYP and Pelicans, is one of the NHL Draft’s most polarizing prospects. He was widely considered a top-three talent in the 2022 NHL Draft but couldn’t match his skillset with production playing against men in Finland’s top circuit. He showed incredibly well in a short stint at the World Juniors, but not even a swap of club teams through the regular season could spark the enigmatic forward.

Still, Lambert is a talented forward with high-end playmaking ability and vision. He has speed to burn, and have move fluidly through the neutral zone. There’s not an offensive skill he doesn’t possess — except perhaps an ability to pull it all together.

Denton Mateychuk is one of the best exports from the Western Hockey League this season, finishing fifth in league scoring amongst defencemen with 64 points (13 goals, 51 assists) in 65 games as a 17-year-old. That production mark ranks him fifth among WHLers — at any position — in scoring. He was also a member of Canada’s gold medal-winning entry at the 2021 Under-18s as a 16-year-old.

Mateychuk, who stands at 5’11 and 188 pounds, possesses great skating ability. He showcases incredible agility with an ability to quickly shift his balance to fake opposing defenders when leading the rush up ice. His anticipation and quick acceleration allow him to be a threat both off the rush and when pinching down from the point.

Rutger McGroarty led the talented US National Team Development Program in goals and game-winning goals this season and registered a +54 rating in 54 games — tops among all forwards with the club. He also helped Team USA to silver at the 2022 Under-18s with nine points (eight goals, one assist) while wearing the captaincy for his country. He was named a top player for his team, naturally.

McGroarty isn’t shy to use his 6’1, 200-pound frame to impose his will on the opposition. The University of Michigan commit is tough to contain both in front of the net and along the boards, thanks to that frame and a class-leading compete. He has true-and-true game-breaking talent in terms of being able to put a team on his back.

Owen Pickering, Mateychuk’s cousin and an honour roll student, led all Swift Current Broncos defencemen in scoring this season with 33 points (nine goals, 24 assists) in 62 games played, and was a key piece of Canada’s entry at the Under-18s in April, named one of the team’s top three players.

The numbers on Pickering won’t overwhelm, but his top-end potential will. Still very much a raw, unfinished product, Pickering has a calm demeanour and quick feet, making him a patient and cerebral player at both ends of the ice. He’s heady in all three areas of the ice and has hands that’ll allow him to execute seemingly at will.

Only two draft-eligible players produced more offence in the WHL this season than Conor Geekie of the Winnipeg ICE. The 6’3, 196-pound forward scored 70 points (24 goals, 46 assists) to help his club finish atop the WHL standings and into the third round.

The scouting community is a little split on the high-end forward whose brother was a third-round pick in 2017 and currently plays for the Seattle Kraken. Geekie has deceptive speed and is shifty in tight quarters, where his panic-free game shines through. He has a high compete and can play a variety of styles. Still, there’s some question if his lack of high-end speed will limit his NHL potential.