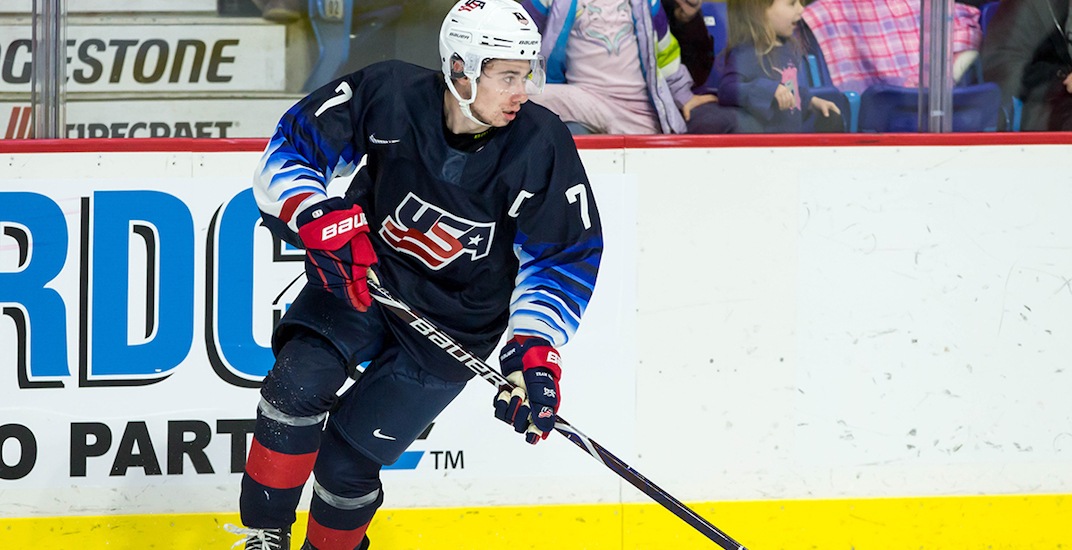 He’s the most hyped up defence prospect in Canucks history and the wait to see him in blue and green is nearly over.

Quinn Hughes signed a three-year, entry-level contract with Canucks on Sunday, one day after his college career came to an end with the University of Michigan.

“Quinn is an exceptional skater, strong on the puck and plays with creativity and vision,” said GM Jim Benning. “He was a leader on his team at the University of Michigan and has had success at the international level. We’re excited for Quinn to join our team and continue to grow his game as a member of the Vancouver Canucks.”

The 5-foot-10, 170-pound blueliner got a taste of playing at Rogers Arena in January, winning a silver medal with Team USA at the 2019 IIHF World Junior Championship.

Like Brock Boeser and Adam Gaudette before him, Hughes will make a late-season NHL debut. The smooth-skating American is scheduled to fly to Vancouver on Tuesday.

The Canucks have 13 games remaining on their schedule, though they would be wise to sit Hughes out of three of them. If Hughes appears in 11 or more games, it will affect his eligibility for the Seattle expansion draft in 2021.

The Canucks will be allowed to protect just three defencemen, with first and second-year pros being exempt. If Hughes plays 10 games or less this season, he’ll be exempt from the expansion process, allowing the Canucks to protect an additional defenceman.

Playoff games also count towards that tally, though with the Canucks now nine points back of the final wild card spot in the West, that doesn’t seem like a realistic worry.

Vancouver plays their next two games at Rogers Arena, against the New York Rangers on Wednesday and the New Jersey Devils on Friday.