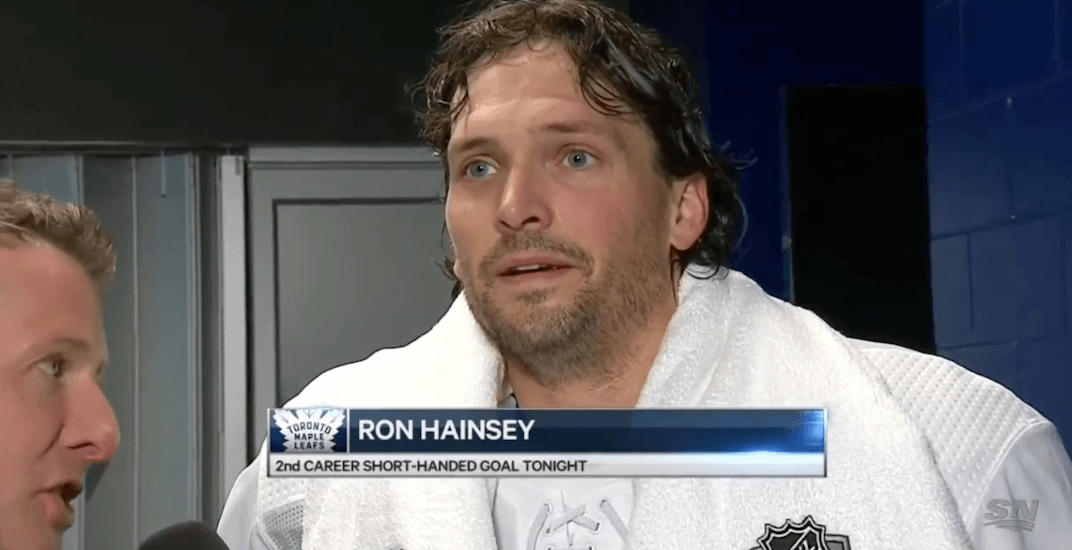 In Toronto, Dan Murphy was enemy No. 1. But in Vancouver? Well, he’s now a folk hero.

It all has to do with how the Sportsnet host posed a question to Maple Leafs defenceman Ron Hainsey during the second intermission of Wednesday’s game against the Vancouver Canucks.

Thank You Dan Murphy from r/canucks

“Your club’s a remarkable 32-0 when leading after two periods,” Murphy said, with Hainsey’s team up 2-0 at the time. “I’m assuming you’re not going to change much in that third, still pedal to the medal?”

Hainsey: “Well thanks for bringing that up.”

Murphy: “I’m not trying to jinx you.”

Wouldn’t you know it, the Murph curse was real, as the Canucks scored two quick goals to tie the game up early in the third period and won the it in overtime, handing the Leafs their first loss when leading after two periods.

Like a modern day Steve Bartman, Leafs fans were quick to point the finger at the Vancouver-based broadcaster for the loss.

Take it away, Leafs fans:

If we lose, I blame Dan Murphy. @sportsnetmurph #LeafsForever

Ron Hainsey is really going to be mad at @sportsnetmurph now.

This is all your fault @sportsnetmurph !

This is on you. @sportsnetmurph

As soon as he said it, hainsey knew it. I knew it. We all knew it.

Banned from doing intermission interviews. What kind of numpty brings up the record to a player mid game? #rookie

Nice one @sportsnetmurph you fucking muppet.

We will never forgive you.

In Vancouver, the mood was a little different:

While @sportsnetmurph remains the consummate professional, thank you Murph. Thank you. pic.twitter.com/TgZjZJUomw

FUN FACT: The @sportsnetmurph curse has prevented the Leafs from making the second round of the playoffs in 14 years. #MurphCurse

@sportsnetmurph deserves some credit for bringing up the stat to Hainsey in the 2nd intermission. Well done Murph!!!

I credit this #Canucks comeback to @sportsnetmurph for a great question in the 2nd intermission. @Canucks #2all

Murph did apologize to Leafs defenceman Morgan Rielly after the game, so there’s that.

Never mind Murph, the Leafs have been cursed when playing in Vancouver in recent years. Toronto has lost 10 of their last 11 visits to Vancouver since 2005.