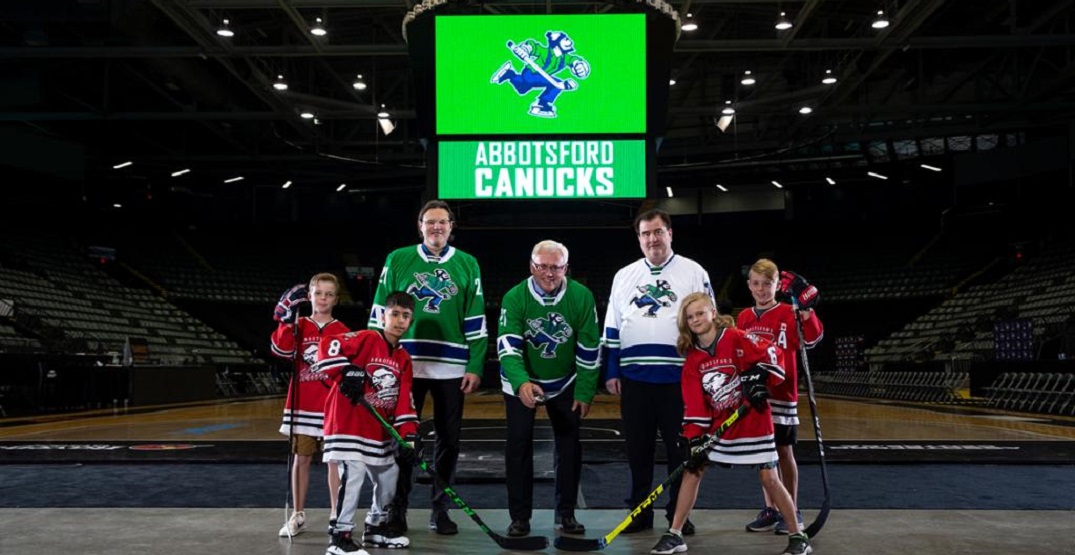 The Abbotsford Canucks are coming to town.

The name and logo for the new Canucks-affiliated Abbotsford AHL franchise officially debuted on Wednesday morning, with the team being called the “Abbotsford Canucks” and sporting the popular “Johnny Canuck” logo.

A team release states that the AHL team’s colours are “Field Green, Pacific Blue, Fraser Blue, Valley Fog Grey and Mountain White, representing the area that the Abbotsford Canucks will proudly play for.”

The “Baby Canucks,” as some have already dubbed them on social media, are expected to begin play this fall out of the Abbotsford Centre, with the AHL season expected to kick off on October 15. No schedule has been released yet.

The announcement was originally scheduled for 10 am PT but didn’t officially come through until around 10:20 am on the Canucks social media acccounts.

“We’re thrilled to unveil Abbotsford’s new AHL brand,” said Francesco Aquilini, Chairman, Canucks Sports & Entertainment. “The Abbotsford Canucks will be an extension of our history, and a new identity for fans in the Fraser Valley to embrace. Today marks an important milestone. It brings us a big step closer to puck drop in the fall and an exciting inaugural season.”

Jerseys and other merchandise are now for sale at Vanbase.ca.

The NHL Canucks previously had an affiliation with the New York-based Utica Comets over the past eight seasons.

The Comets chose not to temporarily relocate to Canada during the COVID-19 pandemic, and played 28 games last season exclusively in the AHL’s North Division.

Abbotsford last played host to an AHL team from 2009 to 2014, when the Calgary Flames-affiliated Abbotsford Heat were in town.

The move to Abbotsford as the Vancouver AHL affiliate was announced in May.

Ten names were considered on the final shortlist in an email that was sent out to Canucks fans in June:

“The American Hockey League is looking forward to returning to Abbotsford this fall,” said AHL President and CEO Scott Howson in a previous release. “With the Fraser Valley’s location in the heart of Vancouver Canucks country and with the Canucks’ commitment to the region, we have confidence that the partnership between the club and the City of Abbotsford will be a successful one.”