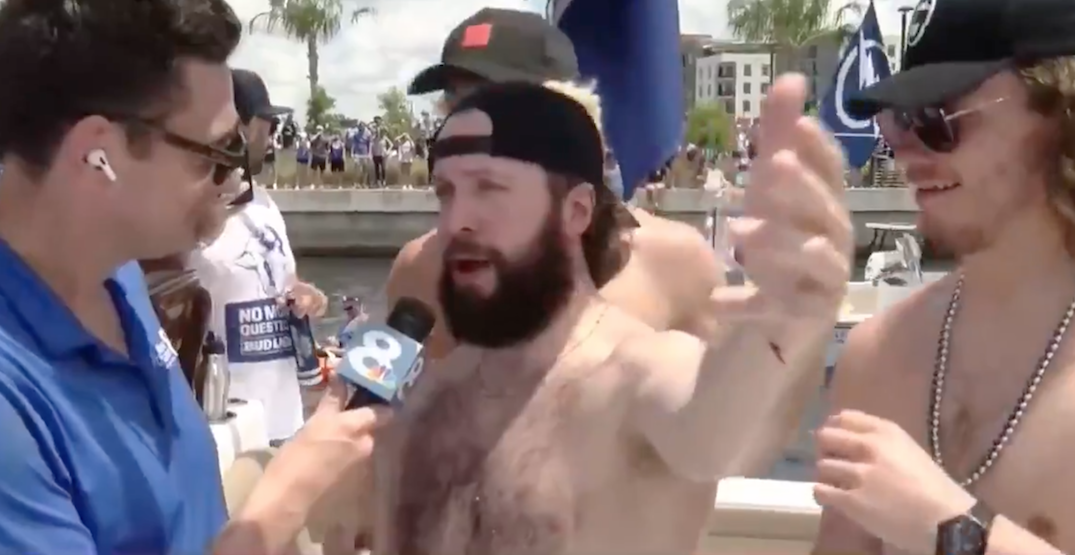 Tampa Bay Lightning forward Nikita Kucherov was having the time of his life during his second Stanley Cup parade in less than ten months.

“Unreal. All the people out here are unreal,” Kucherov said to NBC affiliate WFLA while onboard a boat at Monday’s parade. “Let’s party hard. Our time, baby. Back to back. That’s how we do it.”

“Nobody can beat us, back to back years,” Kucherov added.

The Lightning hoisted the Stanley Cup on July 7, after defeating the Montreal Canadiens 1-0 in Game 5 of the championship round.

Following the win last week, Kucherov came after Montreal fans’ reaction to winning Game 4 while they were still down 3-1 in the series.

His postgame antics even earned him a Bud Light sponsorship.

He may not have a shirt, but he’s got a contract with us. Welcome to the team @86Kucherov!

There will be no press conferences for this announcement. pic.twitter.com/u2j0czHahc

On Monday, Kucherov had a moment of post-beer clarity while on the boat. The Lightning are currently in need of a roster shakeup due to a precarious salary cap situation.

“I wish we could keep everybody, but it’s a business,” Kucherov said. “But as of right now, let’s party hard, let’s enjoy. We deserve it.”

“Nobody else has done it before. It’s just unreal,” Kucherov said when asked about how he was enjoying the boat parade.

Kucherov wore a shirt yesterday that said “$18 million over the cap,” a nod at Tampa Bay’s use of the long-term injured reserve loophole that allowed the Lightning roster to have a higher salary in the playoffs than would typically be allowed in the regular season.

Kucherov, who carries a cap hit of $9.5 million himself, missed the entire regular season after undergoing hip surgery this offseason.

Kucherov also had a “#1 bullshit” shirt made for him and his teammates (and agent Dan Milstein), a nod to his now-famous catchphrase. He made the comment when talking about Lightning goaltender Andrei Vasilevskiy not winning the Vezina Trophy.