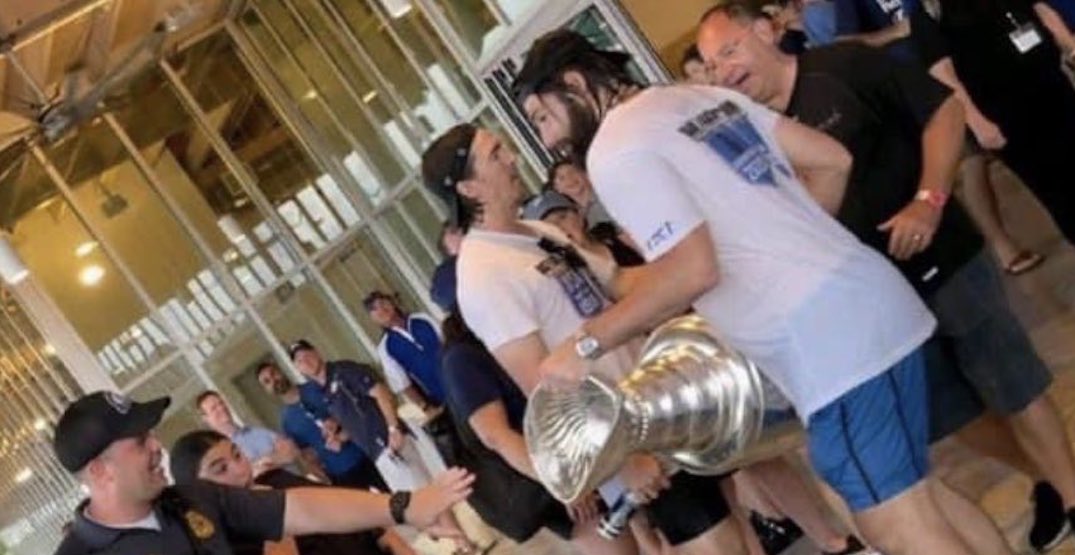 It rained on the Tampa Bay Lightning’s parade today, in more ways than one.

The Stanley Cup is in need of repairs, according to multiple reports, with the trophy being damaged during today’s celebration in Tampa.

For the second year in a row, the Lightning celebrated a championship with a boat parade, taking advantage of Tampa Bay geography for the occasion. Beer and champagne flowed throughout, which was presumably a contributing factor to the Cup receiving a big dent.

Ironically, the Stanley Cup will need to be sent to Montreal, where it’ll undergo repairs, according to a report from Eduardo A. Encina of the Tampa Bay Times. The Lightning, of course, beat the Montreal Canadiens last week to capture their third Stanley Cup in franchise history.

The boys are back to boat! pic.twitter.com/jlrDpwsvN1

The #StanleyCup did sustain some damage today during the #TBLightning’s victory celebration. It will go to Montreal to be repaired and the #GoBolts Cup tour will begin as scheduled next weekend. #TampaBay

That wasn’t the only bit of irony to hit Tampa Bay today, as an actual lightning storm forced the cancellation of an outdoor celebration. The ensuing downpour served to literally rain on their parade.

Today’s celebration event at Julian B. Lane has been cancelled due to weather conditions.

What exactly caused the damage to the Cup isn’t clear, though this has been a concern in the past. Philip Pritchard — the Stanley Cup’s pseudo-bodyguard — advised Washington Capitals players to stop doing keg stands off the trophy in 2018 due to the potential for damage.

The Cup has been beaten up before. In 1987, Mark Messier damaged it while partying at a nightclub after the Edmonton Oilers won the Cup. After the Dallas Stars won the championship in 1999, Guy Carbonneau tried to throw it off a deck into a pool, but missed.

Babies have pooped in the Cup before. Dogs have eaten out of it.

It was thrown into a bonfire by the Toronto Maple Leafs in 1962. The New York Rangers had to pee on it in 1940 to put out a fire they started.

And in 1924, the Montreal Canadiens left it on the side of the road.

So, yes, the Cup needs fixing, but it will be back.