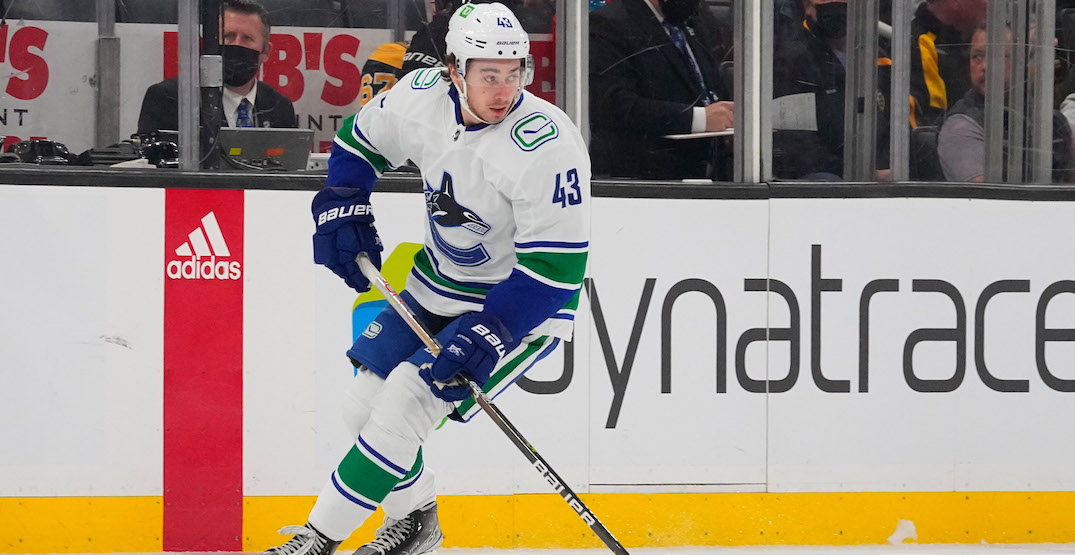 The lack of success from the Vancouver Canucks this season has overshadowed something important.

Quinn Hughes is back to being one of the best defencemen in the NHL.

That’s vital to remember, especially after the disaster that was the 2020-21 season.

Hughes set the bar unbelievably high for himself after his rookie season in 2019-20. He was on pace to shatter a number of franchise records prior to the COVID-19 shutdown. Then in the playoffs, he set a franchise record with 16 points in 17 games. That broke Jeff Brown’s mark of 15 points in 24 games by a defenceman, which was set back during the 1994 Stanley Cup run.

There’s no doubt that Hughes took a step back in 2020-21. However, lost in the disappointment of this season is that the third-year pro is looking once again like the bona fide, No. 1 defenceman that the Canucks drafted at seventh overall in 2018.

Counting on Hughes to pile up the points has never been an issue.

However, this season, he’s tallying points at an all-time high.

The fact that he added four assists in one game against the Ottawa Senators on Wednesday certainly helped.

Hughes is now tied for sixth overall in points by a defenceman. His 18 assists are also tied for the league lead among blueliners with Adam Fox of the New York Rangers. 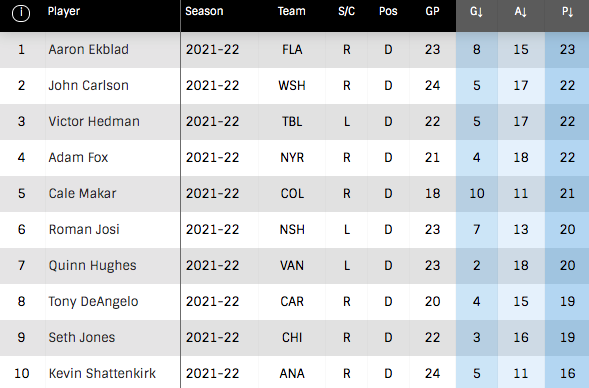 Hughes is tied for sixth in scoring among NHL defencemen (NHL.com)

It’s a good thing Hughes is producing, because the Canucks desperately need it. There’s still a lack of offensive balance on this blue line, which is highlighted by the fact that Luke Schenn is third among Canucks defencemen with five points. He’s only played in 10 of the Canucks’ 23 games to date.

There have been nine games this season where Hughes hasn’t registered a point. In those games, the Canucks are 1-8-0.

As a rookie, Hughes registered 5.72 points-per-60 during five-on-four action. Last season, that number only dipped slightly to 5.22.

So far this season, Hughes is producing power play points at an all-time rate, clocking in at 5.89 points per 60.

The Canucks power play endured a lot of bad luck last season. They actually had higher expected goals-per 60 (6.08) in 2020-21 compared to their dominant performance in 2019-20 (5.82). Much of that is because of Hughes, who continues to drive play with the man advantage.

The 22-year-old is also registering more primary assists with the man advantage. His 3.68 primary assists per 60 so far is a career high, and he ranks 10th overall in the NHL among regular power play defencemen.

Since the beginning of last season, Hughes has a point on 28 of Canucks 42 power play markers. His Individual Points Percentage (the percentage of goals that Hughes gets a point on while he’s on the ice) of 80.5% during that time span is also one of the best marks among NHL defenders.

This is one area where the Canucks needed more from Hughes.

Jack Hughes defends his brother Quinn as he and the Canucks continue to discuss a new contract.

He did lead all Canucks defencemen last season in Corsi percentage, Corsi-against and expected goals for. However, there was a notable drop in defensive performance compared to his rookie season.

Now, it looks like Hughes is taking a step in the right direction.

Of 216 defencemen to skate more than 100 minutes at even strength this season, Hughes’ 55.7% Corsi ranks 23rd overall in the NHL.

The key for Hughes’ success in the defensive zone will never be about grinding guys down in the corners. It will always be about employing a quick stick to retrieve possession and using his puck-moving ability to clear danger from his own zone.

A recent article from The Athletic ranked the 25 best puck-moving defencemen in the NHL today. Hughes made the top-10, largely based on his neutral zone and offensive zone plays with the puck. However in the defensive zone, Hughes still ranked in the 24th percentile of blueliners.

Although the offensive side of his game overshadows his defensive play, it’s hard to argue that Hughes isn’t competent in his own end.

Add it all up, and it makes him a special player on the Canucks blue line.