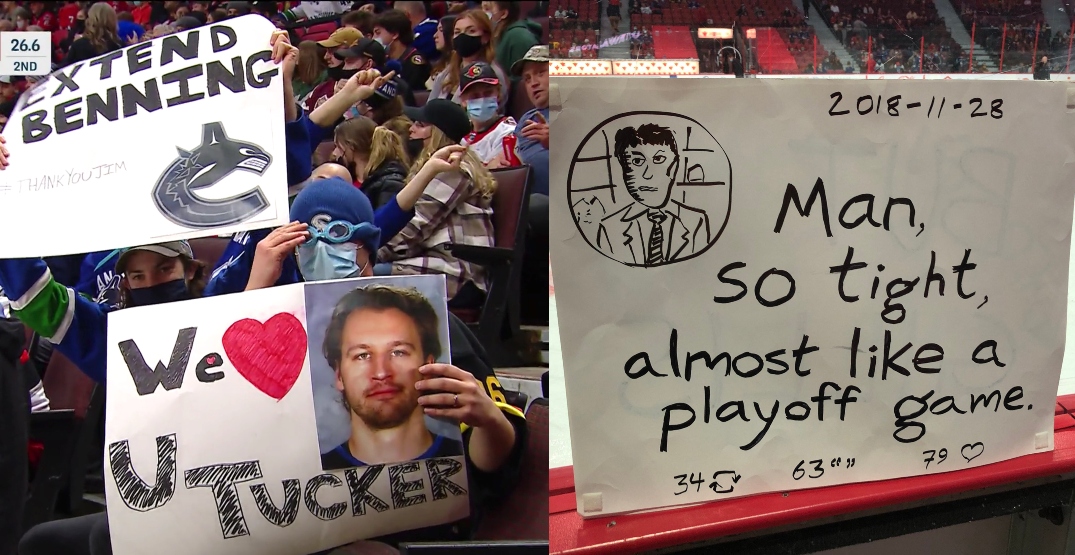 Canucks fans are passionate, and lately, a little bit angry.

But many of them have also got a great sense of humour.

With the team near the bottom of the NHL standings, you can either cry or you can laugh.

That seemed to be evident in some of the signs that found their way into the home of the Ottawa Senators on Wednesday night.

After a “Fire Benning” sign was spotted at the Bell Centre in Montreal on Monday, Canucks fans brought every kind of sign to the Canadian Tire Centre in Kanata.

After Luke Schenn scored a beautiful goal to put the Canucks up 3-1, a rare “Extend Benning” sign was spotted. The sign also had the popular sarcastic #ThankYouJim hashtag on it, so presumably this fan was trying out a little reverse psychology. He was seated next to a fan showing some love to unheralded Canucks defenceman Tucker Poolman.

at 3-1, you kind of have to #canucks pic.twitter.com/wb26yLZNHU

A bunch of other creative signs belonged to a Canucks fan that lives in Ottawa and goes by @Jyrki21 on Twitter.

With only 10,571 fans in attendance to see two NHL bottom-feeders play, Jyrki told Daily Hive that he had lots of room to spread out his signs.

“Our row was almost totally empty, so we just laid them out side by side and left them there all game,” Jyrki said.

The Canucks fan had a different twist on “Fire Benning” by making it bilingual — which was appropriate for the region. He also brought in a “Dissing you, Aqua” sign, which is a reference to Canucks owner Francesco Aquilini telling fans not to “diss” Benning back in October.

The Senators are one of the few teams actually below Vancouver in the standings, and they were voicing their displeasure. At one point, a Sens fan starting a “Fire DJ” chant incorporated “Fire Benning” into his chant as well, alternating between calling for change with the Sens coach and Canucks GM, according to Jyrki.

“The beauty of visiting teams in Ottawa is that there is really no bad blood with anyone other than Toronto. So many people here, like me, migrated from elsewhere, and it’s generally just a well-behaved, polite city of civil servants. So it’s a very easy place to be a visiting fan.”