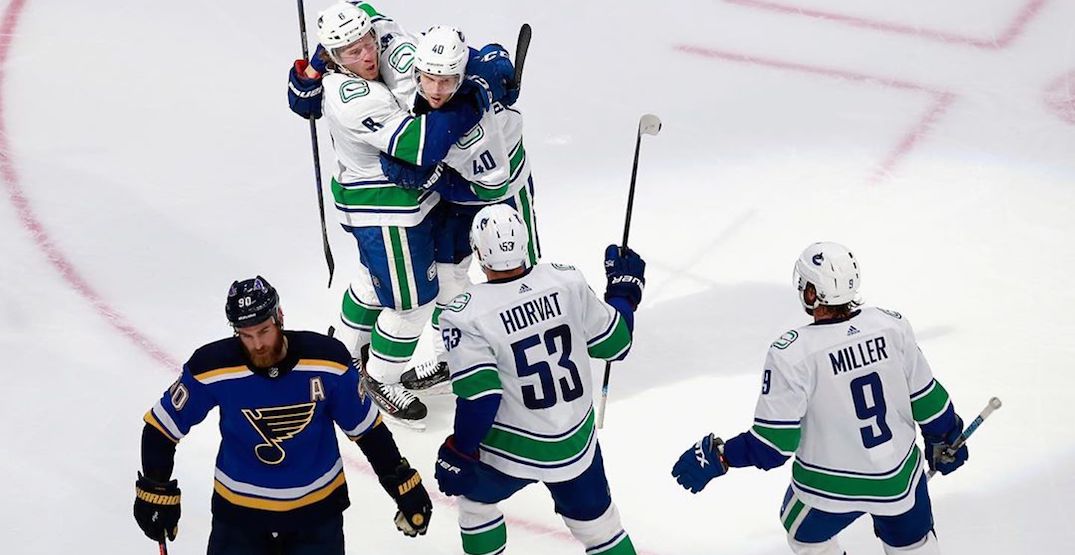 Riding a four-game postseason win streak, the Vancouver Canucks can really put the pressure on the Stanley Cup champions with another win tonight.

After being upset in Game 1, the St. Louis Blues should be a hungry and motivated team for today’s game (3:30 pm PT on Sportsnet).

Here’s a quick rundown of questions that should be answered in this game.

1. How will the Blues respond?

Counting the round robin games, the Blues are now 0-4 in the Edmonton bubble, which is a surprising development, to say the least.

The best team in the Western Conference this season, teams like the Blues don’t often go quietly into the night.

Expect a Craig Berube-coached team to play even more physically tonight, with extra emphasis on roughing up the Canucks’ young stars.

With practices closed to independent media during the pandemic, Canucks lineup decisions are top secret until the pre-game warmup, and sometimes even longer than that.

JT Miller gave all of Canucks Nation a scare prior to Game 1, as he didn’t take the pre-game warmup. He was thought to be injured until the official lineup sheet was revealed minutes before puck drop.

Hopefully there’s no surprise injuries that pop up.

3. Will the Canucks power play continue to sizzle?

The Canucks can put a damper on the Blues trying to take liberties with their players by continuing to punish them on the power play.

Vancouver was 3-for-6 with the man advantage on Wednesday, and moved the puck really well. The first unit power play has so many dangerous options right now, and it has done a great job of moving around and giving their opponent different looks.

Elias Pettersson’s one-timer on the right side isn’t the only dangerous option, as JT Miller can create havoc skating down the left side too. Quinn Hughes has been smart with his point shots, not to mention the movement he provides as the power play quarterback.

Then there’s Bo Horvat, who scored from the bumper spot in the middle and Brock Boeser, who is getting greasy in front of the net.

Another #Canucks lead thanks to another power play goal! 🔥🔥 pic.twitter.com/AvuB9lPhul

The second-year netminder has built a reputation on bouncing back strong after poor outings, but he also wasn’t nearly as dominant this season. The 27-year-old had a .912 save percentage during the regular season, but has a .867 save percentage in three postseason games.

Can Binnington bounce back?

Jacob Markstrom, meanwhile, was excellent in Game 1, though he didn’t need to stand on his head, stopping 29 of 31 shots he faced.

Tyler Myers now has 10 minor penalties in five postseason games, though his holding penalty last game was a little unlucky.

Myers was actually really unlucky to get a penalty here. His stick got stuck behind Beagle's skate. pic.twitter.com/2chbtm7fyJ

When asked about Myers’ frequent trips to the penalty box, head coach Travis Green pointed out that he isn’t a player that usually takes a lot of penalties. The 6-foot-8 defenceman has just 49 PIMs during the regular season, so this is likely not going to be par for the course.

Many of Myers’ penalties were for being overly aggressive, and the Canucks do want him playing tough. He just needs to figure out where the line is.

6. Will O’Reilly continue to dominate the Canucks top line?

Mostly lost in Vancouver’s big win in Game 1 was that Ryan O’Reilly’s line shut down the Canucks’ top line of Elias Pettersson, J.T. Miller, and Brock Boeser at five-on-five.

The Canucks trio had a Corsi-for percentage of 31.25% in Game 1, being outshot-attempted 11-5 when up against O’Reilly’s line. That doesn’t happen to Pettersson and company very often, and they’ll likely need to be better for the Canucks to win this series.

7. Will Hughes continue to fight through?

Quinn Hughes had the perfect answer when asked about being targeted by the Blues.

Some sneaky crosschecks and facewashes from Perron on Hughes #Canucks pic.twitter.com/3SvXaUuXHg

“It’s kind of an honour that they’re going to key on me,” said Hughes, who is oozing confidence right now with a team-high seven points in five postseason games.

The rookie defenceman was given extra attention by David Perron in particular, and you know that the Blues will do everything they can to knock Hughes off his game. There was lots of talk about who the Canucks’ MVP was during the regular season, with Pettersson and Markstrom getting most of the publicity. But in the postseason, the MVP is quite clearly Hughes.