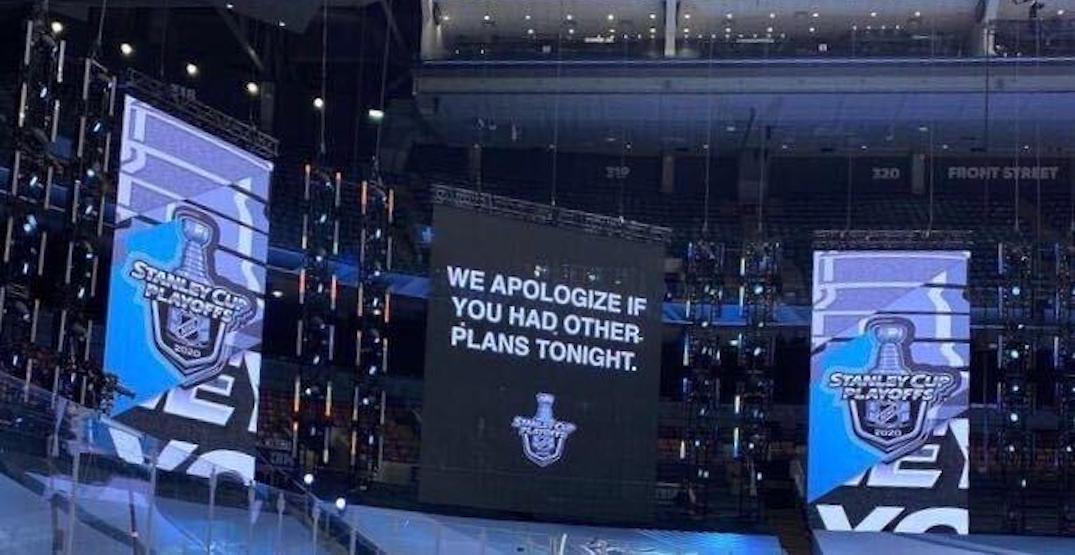 The National Hockey League isn’t exactly well known for its sense of humour, but that’s changing during these pandemic playoffs.

Playing games in empty arenas in Toronto and Edmonton, the folks responsible for game presentation — usually designed for fans in attendance — have shown some brilliant creativity. That was especially true during Tuesday’s marathon overtime game involving the Tampa Bay Lightning and the Columbus Blue Jackets.

The Lightning eventually beat the Blue Jackets 3-2 in quintuple overtime, with Brayden Point scoring with 9:33 remaining in the fifth overtime period — basically two and a half games worth of hockey — in what was the fourth-longest game in NHL history.

A historic hockey game comes to an end.@BraydenPoint19 nails the game winner for the @TBLightning in the FIFTH OT. #StanleyCup pic.twitter.com/QxV7T4HEMg

Blue Jackets goalie Joonas Korpisalo set an NHL record for saves with 85, while Columbus defenceman Seth Jones set a record for most ice time in a single game, playing 65:06.

The game became as comical as it was exhausting, during a break in play during quadruple overtime.

That’s when the NHL invited fans to take part in the “seventh period stretch,” before blaring “The Good Old Hockey Game” inside an empty Scotiabank Arena in Toronto.

We're entering the fifth, yes, FIFTH overtime. So you might want to stretch. #StanleyCup

The NHL later flashed an apology onto the video board, saying: “We apologize if you had other plans tonight.”

Despite the fact that it started at 3 pm ET, the game went so long that it postponed Game 1 of the Boston Bruins series against the Carolina Hurricanes, which was supposed to start at 8 pm ET.

The Canes have the best Twitter account in the league, and they certainly took the ball and ran with it…

The #Canes are all of us right now 😂 pic.twitter.com/wcnEdNXlTe

Hey @NHL, not to tattle but we were supposed to play at 8:00 and the @BlueJacketsNHL and @TBLightning won't get off the ice

Hey Brother, I though u might need some… 88 shots and 85 saves?!really korpi? 😍what’s your room number I’m coming pic.twitter.com/BRHjZXD3JD

The Bruins and Hurricanes eventually played Game 1 this morning, but that game needed multiple overtime periods too.

Could you imagine… 😳 #StanleyCup pic.twitter.com/SevxpqZ8ez

This wasn’t the first time that the NHL has added a bit of comic relief during the 2020 postseason.

Love that they're still announcing attendance for these games 😂 pic.twitter.com/QZR3rdl6iG

…and thanked literal fans in attendance over the weekend…

Thank you… to all the fans in the stands today! 😂🤣 #StanleyCup Round Robin pic.twitter.com/eZBSw6KegO

…reminded fans that “concessions” are in their refrigerators…

Anyone else grabbing a snack for these #StanleyCup Round Robin games? pic.twitter.com/AEpRMk2git

…and even “prohibited” the wave:

No need to get off your couch. 😂 #StanleyCup pic.twitter.com/R9h9Sa7s5M

All this, and the Stanley Cup playoffs have just begun. Well done, NHL, we could use a laugh.