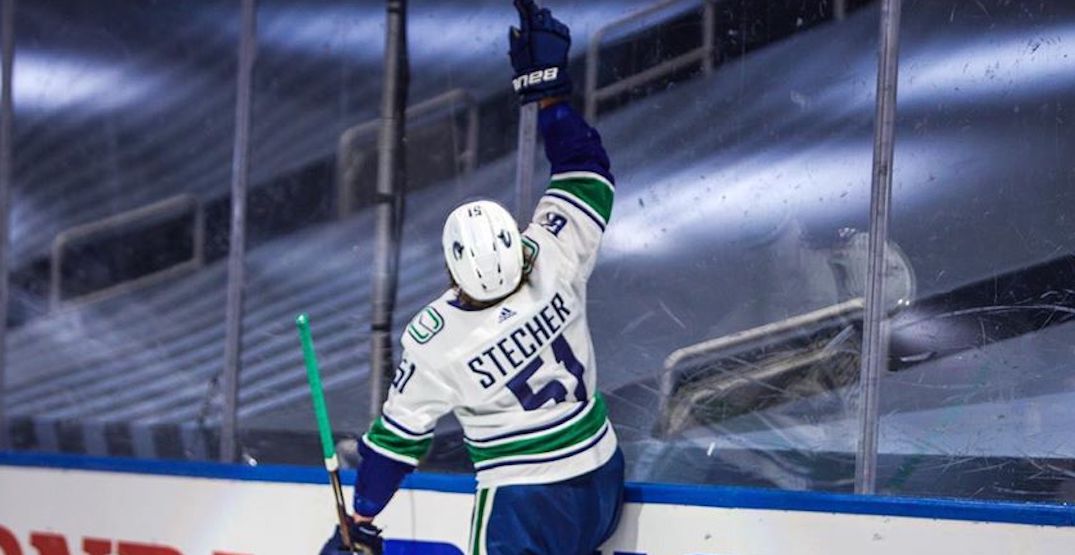 It hasn’t been an easy summer for Troy Stecher.

The Vancouver Canucks defenceman lost his father in June.

“My best friend, my biggest supporter, my hero and my dad,” Stecher said in an Instagram post after his dad’s passing. “I’ll think about you everyday for the rest of my life.”

Stecher didn’t appear to want to talk too much about his father post-game, which is understandable. When when the Richmond native scored his first-ever playoff goal in his first-ever Stanley Cup playoff game — the game-winner no less — there was no question that he immediately thought of his hero.

After Stecher’s shot beat Binnington to give the Canucks a 3-2 third-period lead, he pointed to the heavens.

“I miss my dad every day,” Stecher said in a TV interview with Sportsnet after the game. “It was a big goal at a crucial time. We talked about trying to get the win in Game 1 and obviously that gave us the lead. The boys hunkered down. The biggest thing is we got the win. I’ll take some time tonight to obviously reflect.”

"I miss my dad everyday so, it was a big goal at a crucial time… the biggest thing is we got the win." ❤️

“It’s been tough obviously in certain moments throughout this process,” Stecher said during the post-game media conference. “I’m thankful to be surrounded by my teammates. Obviously I had a couple seconds there to reflect on my dad.

“The biggest thing was everybody showed their support on the bench instantly and kind of gave me a tap, and that motivated me to keep it going.”

Not only did Stecher score the game-winner, along with defence partner Alex Edler, but he was also outstanding defensively. Stecher led all Canucks players in five-on-five Corsi-for percentage, an indicator of strong two-way play throughout the game.

“Stech is a competitor. Smart player, gets himself into good position. He’s fearless,” said head coach Travis Green, who was pleased with the performance of the Stecher and Edler pairing.

“I feel great for him. Anytime someone goes through something like that, you feel for them, it’s sad. He’s probably had some hard days, and to see that happen to him was special for sure and I know his teammates were happy for him.”

Stecher is an easy guy to pull for. An undersized defenceman who went undrafted, he’s had to work hard for everything he’s accomplished. It’s no secret that he’s a popular player with his teammates, who seemed extra happy for the unlikely hero.

“I saw his celebration right away, I wanted to congratulate him,” said Elias Pettersson, who was spotted saying something to Stecher on the bench after his goal. “What Troy had to go through in the summer was just devastating, so I just wanted to go and hug him.”

Stecher was one of three Canucks players to lose their father this season, as Zack MacEwen and Jacob Markstrom also went through similar heartbreak.

“Very emotional for him. I know what he’s going through and it’s not easy, and for him to show that kind of emotion, I just saw how happy he got and I got emotional as well thinking about it,” said Markstrom. “I gave him a big hug after the game and I’m super happy for another guy who blocks a ton of shots and works his bag off, to get rewarded with a goal in a big game, with everything he’s been going through, that’s huge.”