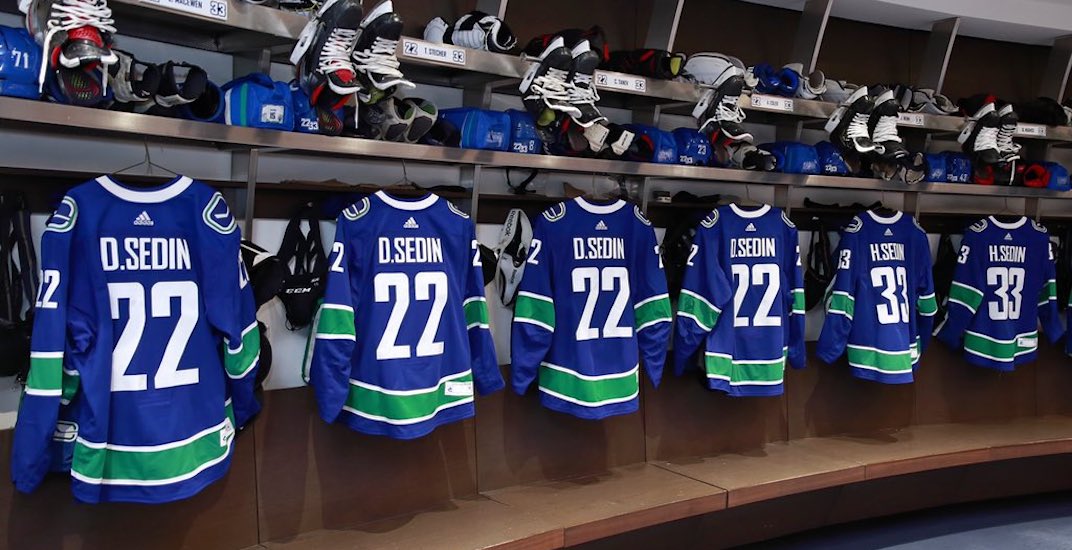 Take one step into Rogers Arena and it’ll be clear that this is not just any other hockey game.

The Vancouver Canucks are honouring Henrik and Daniel Sedin before tonight’s game against the Chicago Blackhawks, raising Nos. 22 and 33 to the rafters in what is sure to be an emotional night at Rogers Arena.

The seats are already covered with blue and white T-shirts:

And during warmup, Canucks players will be wearing #22 or 33 in honour of the Sedins. Here’s a sneak peek:

Indeed, we are all Sedins tonight:

Players will of course put their usual jerseys on for the game, though they will sport a Sedin helmet decal.

Fans will receive a complimentary Sedin-themed beer from Budweiser, as well as a T-shirt and commemorative magazine. The 45-minute long ceremony will be televised on Sportsnet beginning at 6 pm, but the Canucks are advising people to be in their seats by 5:45.

The Canucks have also announced a new partnership between the Canucks for Kids Fund and the Sedin Family Foundation, creating a legacy project supporting families across BC. Funding for the first project will match tonight’s 50/50 proceeds, with 50/50 proceeds from one home game each season directed towards the annual legacy project in the future.

While we don’t know many of the details of tonight’s ceremony, we do have an idea of who will be in attendance, with Roberto Luongo, Alex Burrows, Kevin Bieksa, Ryan Kesler, Mike Gillis, and Brian Burke reportedly taking part.

Roberto Luongo back in a #Canucks jersey for Sedin Night 👀 pic.twitter.com/h7ylOADRLT