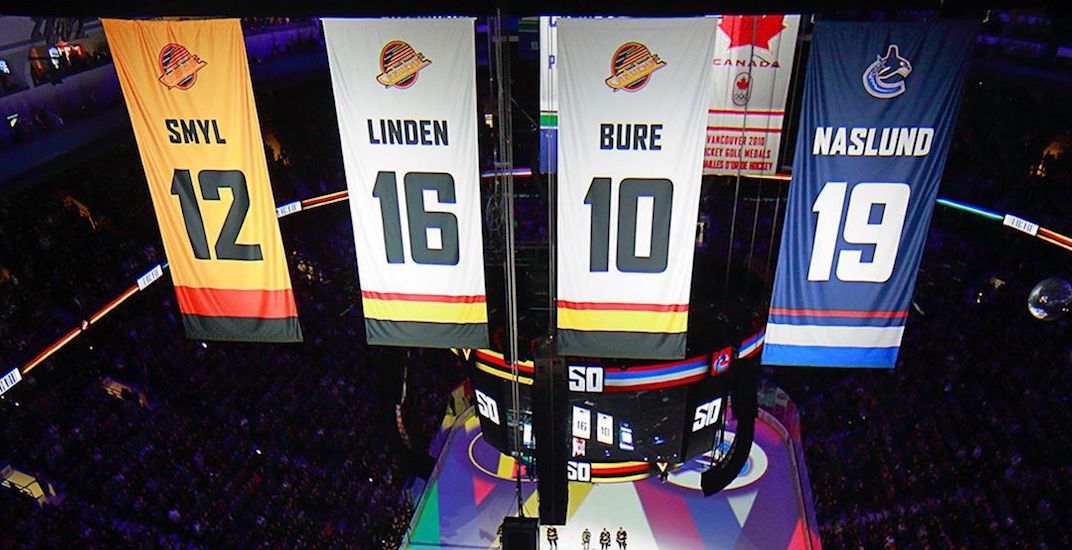 Sedin Week kicked off on Monday night at Rogers Arena with some of the greatest Vancouver Canucks of all-time in the house.

Thank you for everything Steamer, Trev, Nazzy & Russian Rocket. 🙏 pic.twitter.com/sdh0a7SXX2

Stan Smyl, Trevor Linden, and Markus Naslund were on-hand to witness an update to their retired numbers hanging in the rafters.

The Canucks followed the 50th anniversary narrative of celebrating a “colourful past,” as they unveiled new banners for the four players who had their numbers retired.

Naslund’s number 19 represented the blue, burgundy, and silver incarnation of the Orca, while the other three donned the beloved skate symbol.

Smyl’s banner was predominantly yellow to represent the “Flying V” era of the 1980s. Linden and the absent Pavel Bure, represented the white jerseys with the black, red and yellow trim, the classic colours that likely induced flashbacks of 1994 as the jerseys appeared on televisions everywhere.

Never knew how much I was missing this until I saw it.

Representing the colours is perfect. It’s been an amazing year for #Canucks 50th celebrations and the hits just keep coming . pic.twitter.com/aNndumP0Fh

The banners were met with a positive reception at Rogers Arena. That shouldn’t come as a surprise, especially considering the outpouring of love the retro Flying Skate jersey has received this season.

For the first time since he “amicably” split from the organization, Linden made his return to Rogers Arena on Monday night.

Linden split from the Canucks in late July of 2018. His departure from the organization was deemed to be mutual, but Canucks fans haven’t seen or heard much from him in the time since.

Linden was also interviewed on Sportsnet during the first intermission.

“I’m thrilled to be back, it’s been a lot of fun seeing some old friends,” said Linden. “There are so many good people in this organization. It’s just fun to be part of this week.”

When Dan Murphy asked if there was some anxiety in coming back to the arena, Linden has this to say.

“A little bit, I’d be lying if I said there wasn’t. Certainly some mixed feelings, I’ve had a long history with this organization, 32 years, but all good, I’m just excited for what’s to come.”

It had been even longer since Naslund had made an appearance at Rogers Arena, but he was in town from Sweden for Sedin week.

He was met with a loud ovation from the Canucks faithful as Tom Larschied’s call of “Markus Naslund is back” rang through the speakers of Rogers Arena.

Hailing from the same hometown as Daniel and Henrik in Ornskoldsvik, Sweden, Naslund paved the way for the twins to become legends in the city. Henrik Sedin and Naslund have served as captain of the Canucks for 16 of the last 19 seasons in Vancouver.

Three of the four retirees were on-hand to witness their retired jerseys being revamped, but Bure, as mentioned, was noticeably missing in attendance.

He did, however, make a video appearance that was played during the ceremony.

And now a message from Pavel Bure, who was unable to attend Legends Night. 🇷🇺🚀 pic.twitter.com/ZxeUa8xIXf

“Having my jersey retired with Stan, Trevor, Markus, and the Sedins’ is one of the greatest honours of my life,” Bure said in the video.

“It’s exciting to see the Canucks push for the playoffs again. Good luck, I promise I’ll see you soon.”

Skate soars at “The Rog”

This was the fourth time the Canucks wore the Flying Skate jersey at Rogers Arena this season, but this was easily their most successful endeavour in the ’90s throwback.

The Canucks strolled out to a 3-0 first period lead, with goals from unlikely sources such as Zack MacEwen, Brandon Sutter, and Jordie Benn. Despite a brief surge from Nashville in the second period, the Canucks finished the night with a 6-2 victory.

Markstrom was once again brilliant in the win, as he ended up with 36 saves on 38 shots. Surprisingly (or perhaps not), the Canucks are 13-1-0 at home this season when they get outshot.

It was the last scheduled appearance for the beloved throwback jersey this season, with the club going went 3-0-1 this while donning the Skate.