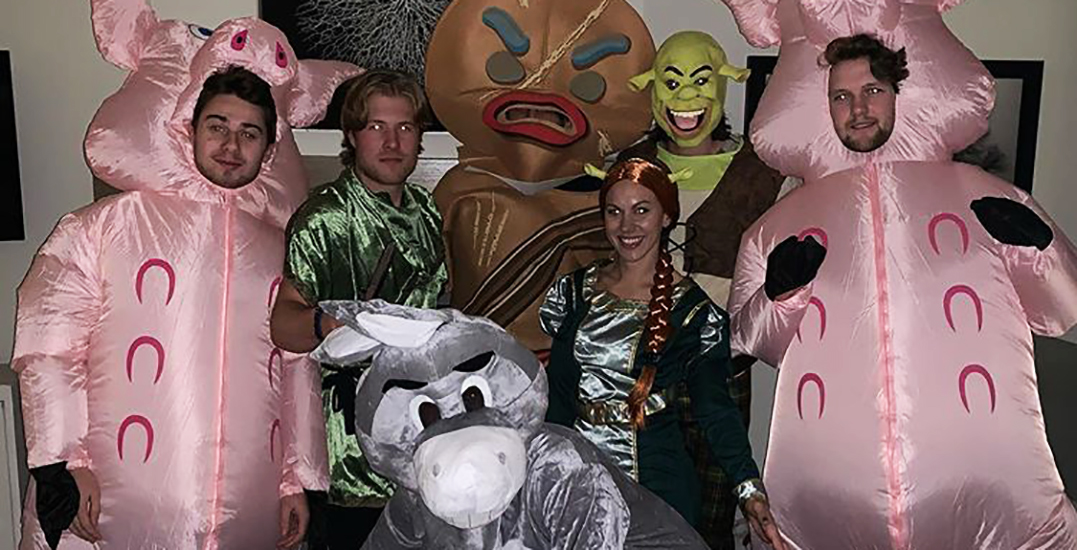 Over the past weekend, the Vancouver Canucks held their annual Halloween party and, naturally, there was no shortage of great costumes.

Young guns and veterans alike got dressed to the nines, and many costumes were truly fitting.

Here’s a look at some of your favourite Vancouver Canucks players and some Shrek-tacular costumes.

Not every Halloween costume is created equal but like all good teams, everyone has a part to play.

Brock Boeser, used his flow to his advantage, dressing as Prince Charming (or a much better looking Lord Farquaad) from the Shrek films.

Veteran defenceman Chris Tanev got green and mean, teaming up with his significant other as Shrek and Fiona.

Youngsters Quinn Hughes, Thatcher Demko, and Elias Pettersson got the tail end of things, suiting up as the pigs and Donkey, respectively.

And for Jake Virtanen, who dressed as the Gingerbread Man? Well, that’s just how the cookie crumbles.

Captain Bo Horvat and his wife Holly (the two got married over the summer), have made couple costumes a Halloween tradition.

Last year, they melted the hearts of fans with Mario Kart Costumes. This year, they pulled out the leather for a pair of Grease costumes.

The Swedes get cheeky and Peaky

It’s pretty clear what these four players have been watching while on the road.

Oscar Fantenberg, Jacob Markstrom, Loui Eriksson, and Alex Edler got dapper, dressing up as the cast of the British drama series, Peaky Blinders.

This Halloween, Tim Schaller traded in his skates for a pair of absurdly high boots, masquerading as “Stone Cold” Steve Austin.