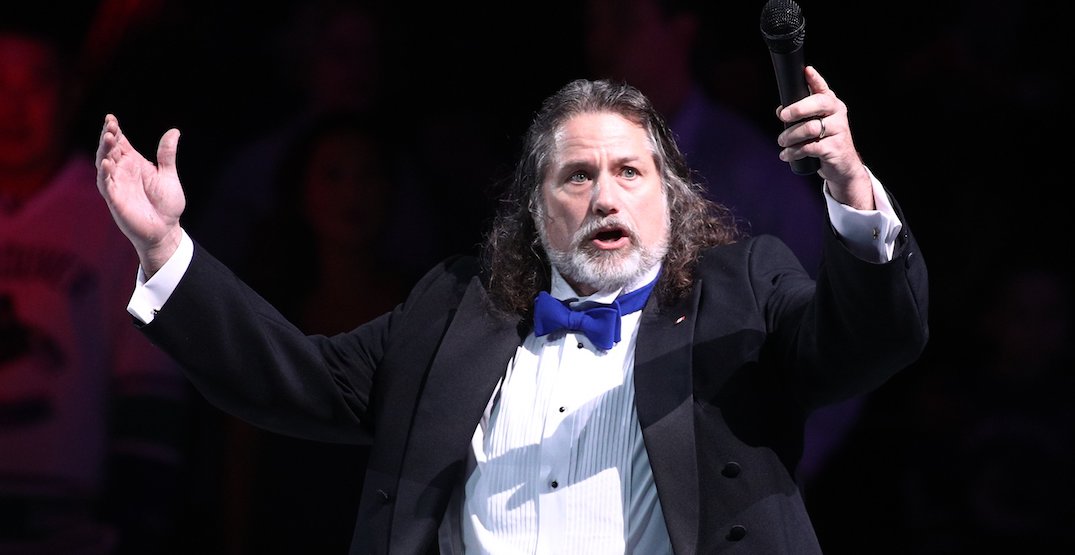 Mark Donnelly has been associated with the Vancouver Canucks for nearly two decades.

The longtime anthem singer, best known for letting the crowd take over singing part of O Canada, quickly became a fan favourite. While he didn’t sing before every game, he was often picked for big games and most certainly was given the microphone during the playoffs.

But, lost in the hoopla of Donnelly’s public dismissal for his anti-mask stance is the fact that the team was already growing increasingly tired of his antics.

A source with knowledge of Donnelly’s part-time employment with the team told Daily Hive that the singer was effectively being phased out. He used to sing at approximately half of Canucks regular-season home games and was moved to just 5-6 games per season in the last two years.

Donnelly was the only anthem singer the Canucks paid on a regular basis, but the phase-out was not motivated by money.

While fans liked his schtick, Donnelly’s far-right views have been creeping into the public domain for a while now.

Donnelly sang at an anti-abortion rally back in 2012, telling a crowd of people outside the Vancouver Art Gallery: “There’s a lot of Canadians, both born and unborn, and this is for all of us, for everyone out here too and all of Canada.”

“Remember, if we can’t discuss things rationally, then we’re not Canadians. We have to be able to talk,” he added.

Donnelly tried delving into politics in 2018, as he unsuccessfully pursued the Conservative Party nomination for South Surrey-White Rock in the federal election.

“I believe our federal government, under the leadership of Prime Minister Justin Trudeau, is running Canada off a cliff,” Donnelly said at the time.

The last two years have seen Donnelly’s political views subtly spill out onto the ice, as he has refused to sing O Canada’s new gender-neutral lyrics.

On January 31, 2018, Canada officially changed the lyrics of the national anthem to replace “in all thy sons command” to the more gender-neutral “in all of us command.”

Donnelly didn’t change with it.

Before the change in lyrics, the last words Donnelly consistently sang before letting the crowd take over were “in all thy sons command.” After the change, Donnelly stopped singing after “true patriot love.”

At the anti-mask rally on Saturday, Donnelly’s version of O Canada included the outdated “all thy sons command” lyrics.

The 50th anniversary season was part of the reason why Donnelly was kept around last year, though he wasn’t being picked for every big game. And when the playoffs began, it was Marie Hui who was asked to sing for pre-recorded videos that played before Canucks “home” games in the Edmonton bubble.

Looks like @mariehui has taken over as the #Canucks' No. 1 anthem singer 🇨🇦 pic.twitter.com/77BkPfWXQ7

So while his dangerous anti-mask rhetoric was enough to get him fired, this wasn’t Donnelly’s first offence. Given that the team was already phasing him out and hardly anyone noticed, the decision to cut ties should have been an easy one to make.