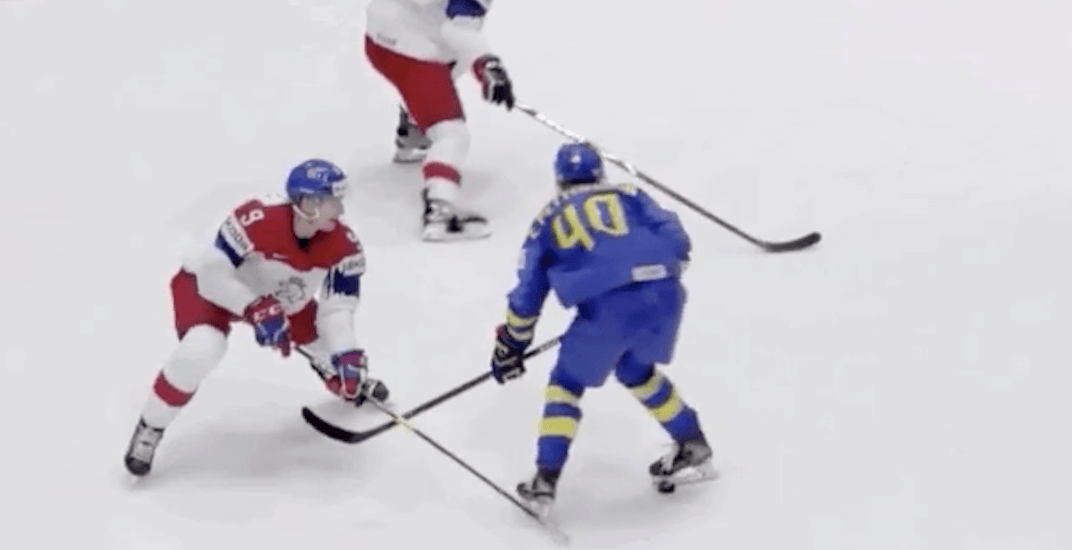 Elias Pettersson was turning heads with Team Sweden on the first day of the World Championship in Slovakia on Friday.

The Vancouver Canucks’ rookie sensation pulled off a pair of dazzling moves, which went viral on social media.

What a play from Elias Pettersson 😱 pic.twitter.com/NnHVUBwju3

The second play that had everyone buzzing didn’t result in a goal, but was one of those ‘how did he even think of doing that?’ kind of plays.

It had everyone impressed, and it wasn’t just limited to Canucks fans.

Pettersson has Mike Johnson gushing with this sweet fake on the zone entry #canucks pic.twitter.com/x0uXH2U9zY

He recognizes that the puck would’ve been swatted away by the dman so he decides against stickhandling. Smartly, he kicks it back to the trailer. Very smart play. That’s a pass on the tape if the defenseman’s stick didn’t touch it

Do your dekes bro

Pettersson played 19:35, more than any other Swedish forward, but his impressive outing did not come in a winning effort. The Swedes were upset by the Czech Republic, who won the game 5-2, ending Sweden’s 17-game World Championship winning streak.

The Canucks centre thinks his team has room for improvement, and blamed himself for one of the goals against.

Loui Eriksson played 15:39 – more than he averaged with the Canucks last season. He registered four shots, but was a -3 in the game. Jacob Markstrom, who was injured in a pre-tournament game, did not dress.

None of the Canucks players participating in the overseas tournament got a winning feeling on the opening day.

First big hit of the tournament with Troy Stecher getting leveled by Marko Anttila. #IIHFWorlds pic.twitter.com/iNY0clixbS

Canuck fans looking forward to seeing this, Quinn Hughes on the power play. Here he makes a nice play to help Team USA gain control then fires a laser from up top that gets deflected out front. #IIHFWorlds #NTDP #Canucks pic.twitter.com/CAkMcJWnYv

Quinn Hughes was relied upon more for Team USA, playing 18:15 in a 4-1 loss to host Slovakia. Thatcher Demko backed up former Canucks goalie Cory Schneider for the Americans.