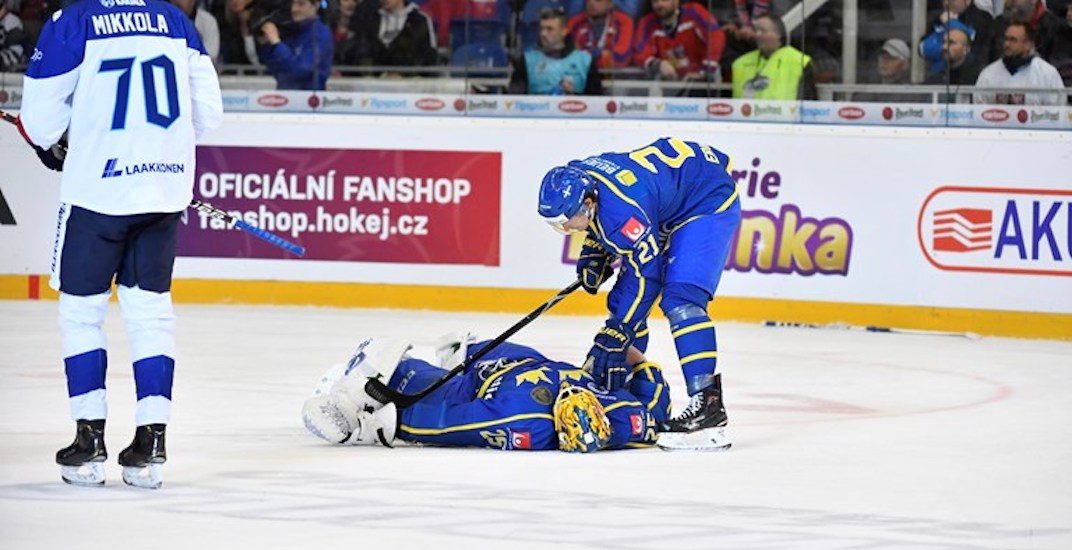 Canucks fans were surely holding their breath after seeing goaltender Jacob Markstrom involved in a violent collision during a World Championship tune-up game on Sunday.

Finnish forward Juhani Tyrvainen hit Markstrom head-on during the second period of a game between Sweden and Finland played in the Czech Republic. Markstrom, who was coming out to play the puck, left the game and did not return.

Markstrom out of the game after getting hit when trying to get to the puck before the finnish player.

No game suspension for the finnish player, Finland ended up with a powerplay.#Canucks #Markstrom #CarlsonHockeyGames pic.twitter.com/9a8FKryIFM

“When their goalkeeper goes out and stops a puck in the third, we’ll have to see if we run him then,” added Swedish forward Patric Hornqvist of the Pittsburgh Penguins.

Team Doctor of @Trekronorse on Jacob Markström: "We removed him from the game because he had some pain in his upper body. He has full range of motion, but we just wanted to be cautious. This is just a pre-tournament game. He should be fine for the World Championship."

Swedish broadcaster SVT confirmed that Markstrom suffered a shoulder injury on the play. Fortunately, it doesn’t sound like the injury is as serious as first feared.

“It is an injury to the upper body but no danger to the World Championship,” team doctor Peter Strom told Swedish broadcaster SVT, adding that Markstrom was taken out for precautionary reasons.

Team Sweden representatives expect Markstrom to be ready for the IIHF World Championship, which begins Friday in Slovakia. That’s a relief for Sweden, as Markstrom is coming off the best season of his career, being named the Canucks’ MVP at season’s end.

Former NHL goalie Jhonas Enroth finished the game for Sweden, who prevailed 2-1. Canucks centre Elias Pettersson registered an assist on the winning goal, scored by Flames forward Elias Lindholm. The third Canucks player on the team, Loui Eriksson, was held off the score-sheet.

It’s been a terrible last few months for Canucks goalies, who have been getting injured with regularity.

Prospect Michael DiPietro suffered what was a serious-looking injury on Saturday during the OHL Final, which caused him to leave the game.

A little late on this but here is @Ottawa67sHockey Mikey Dipietro's injury below: pic.twitter.com/o8kq2DVxOT

Early word is that DiPietro suffered a first-degree high ankle sprain. He’s listed as day-to-day, but there’s no timetable for his return.

DiPietro’s team, the Ottawa 67’s, leads the best-of-seven series against Guelph 2-0. The injury could keep the 19-year-old out of the remainder of the series. Hopefully he’ll be available for the Memorial Cup (if Ottawa makes it) at the latest, which begins May 17.