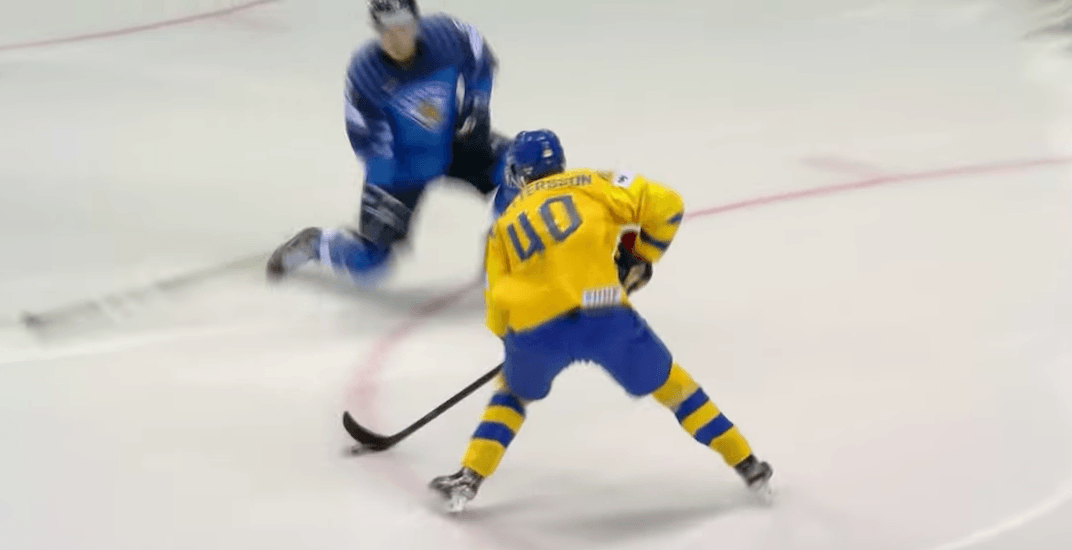 Elias Pettersson’s remarkable rookie season is finally over, but not before one last display of pure brilliance from the 20-year-old Swede.

The Vancouver Canucks super-rookie scored a beauty for Sweden during the second period of their IIHF World Championship quarter-final matchup against Finland on Thursday.

Elias Petersson (@Canucks) streaks down the side, stops up, and snipes his 3rd goal of the tournament for @Trekronorse!

Streaking down the right wing, Pettersson made a quick stop-up move around a Finnish defenceman to get to the slot. Left hopelessly out of position, the defender put a stick in Pettersson’s legs.

Though the defenceman’s stick tripped him, Pettersson was unfazed, ripping home a wicked wrist shot as he fell to the ice. All that was missing was another ‘death stare.’

The goal was a big one at the time, giving Sweden a 3-1 lead.

Unfortunately for Pettersson, his tournament is now over, as Sweden went on to lose 5-4 in overtime. Pettersson finishes the tournament with 10 points (3-7-10) in eight games, which currently has him tied for 13th in World Championship scoring.

Pettersson’s Canucks teammate Loui Eriksson finished the tournament with four points (1-3-4), while Jacob Markstrom appeared in only two games in the tournament, playing behind Henrik Lundqvist.

Two other Canucks players also had their tournament ended on Thursday, as Team USA lost to Russia 4-3 in their quarter-final. Quinn Hughes finished the tournament with three assists in eight games, while Thatcher Demko played twice for Team USA, backing up Cory Schneider for the other games.

The lone Canuck still playing in Slovakia is defenceman Troy Stecher, who has two points (1-1-2) in eight games.

Canada scored with 0.4 seconds left to send their quarter-final game against Switzerland to overtime, before Mark Stone scored the winner.

The semi-finals are now set, with Canada facing the Czech Republic at 10:15 am PT on Saturday. Russia plays Finland in the other semi-final, beginning at 6:15 am PT. Both games can be seen on TSN.