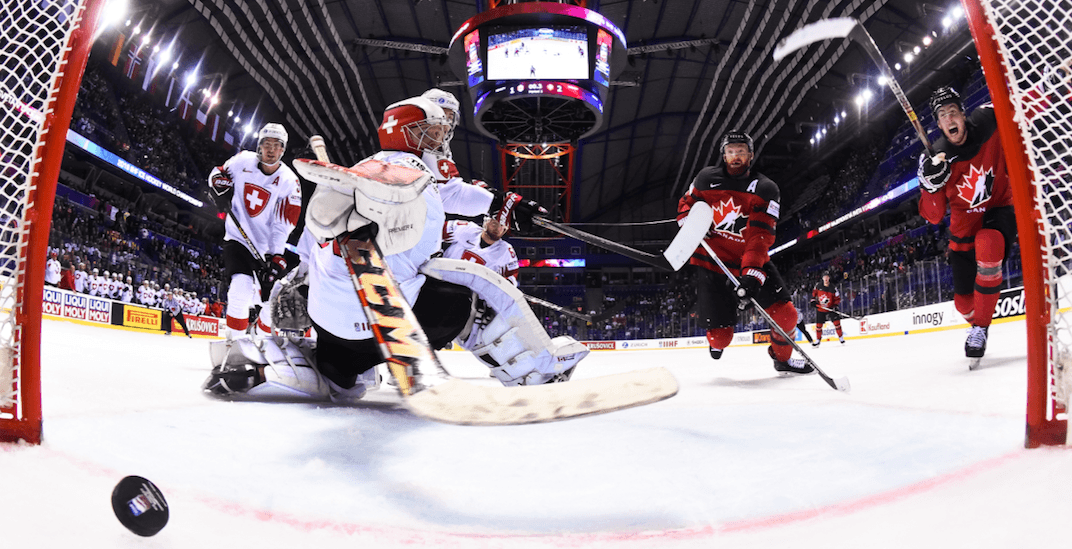 Canada was dead and buried.

Down 2-1 with just seconds left, it looked like the Canadians would suffer an upset loss to Switzerland in the quarter-finals at the IIHF World Championship in Kosice, Slovakia.

That was until New Jersey Devils defenceman Damon Severson’s point shot went in the net for Canada with just 0.4 seconds left on the clock.

With 0.4 seconds left in the 3rd period, @HC_Men's Damon Severson's (@NJDevils) point shot squeaks past the line JUST IN TIME to tie it up!!!

Severson actually had his initial point shot blocked with three seconds left, having to coral the puck quickly before letting go the final blast with only about a second left on the clock. Swiss goaltender Leonardo Genoni got a piece of it, but the puck trickled over the line to force overtime.

“It was wild, they had us on the ropes the whole game, you gotta give them a heck of a lot of credit,” said Severson, who called his goal one of the biggest of his career in a post-game interview with TSN. “We gave it all we had and were able to find a goal late, so that was huge.”

After carrying a majority of the play through the first 60 minutes of the game, it was Canada chasing the puck for most of the three-on-three overtime period.

Pittsburgh Penguins goaltender Matt Murray made some high-pressure saves, before Pierre-Luc Dubois set up Mark Stone for the winner 5:07 into overtime.

On a 2-on-1, Pierre-Luc Dubois (@BlueJacketsNHL) feeds Mark Stone (@GoldenKnights), who buries it to win it in overtime for @HC_Men!

Dubois, who finished the game with a pair of assists, created a two-on-one by chipping the puck past Nino Niederreiter. Stone chipped the puck past Genoni on the backhand to send Canada to the semi-finals.

Alain Vigneault walked into the media area and jokingly said, “I was in Florida having a good time…what was I thinking”? Joking about the stress of coaching through a stressful win over Switzerland.

Canada outshot the Swiss 42-24 in the game, and 12-5 in the first period, yet it was Switzerland getting on the board first. Coming into the game with a struggling power play, the Swiss scored twice with the man advantage, beginning with a goal from Colorado Avalanche forward Sven Andrighetto late in the first period.

Sven Andrighetto (@Avalanche) gets the Swiss on the board late in the 1st period with a shot from the point on the power play!#IIHFWorlds🇨🇭 pic.twitter.com/tqQh9ucQnz

Stone scored his first of two goals in the game 5:45 into the second period, deflecting a point shot from Nashville Predators defenceman Dante Fabbro to tie the game. The Vegas Golden Knights winger also assisted on the tying goal, giving him three points on the night.

Mark Stone (@GoldenKnights) redirects Dante Fabbro's (@PredsNHL) point shot in to get @HC_Men on the board! Stone now has points in six straight games.

But with just three seconds left in the second period, New Jersey Devils centre Nico Hischier banged in a rebound to give Switzerland a 2-1 advantage heading into the final 20 minutes of regulation.

With 3.8 seconds remaining in the 2nd period, Nico Hischier (@NJDevils) pounces on a rebound to put the Swiss in front over @HC_Men!