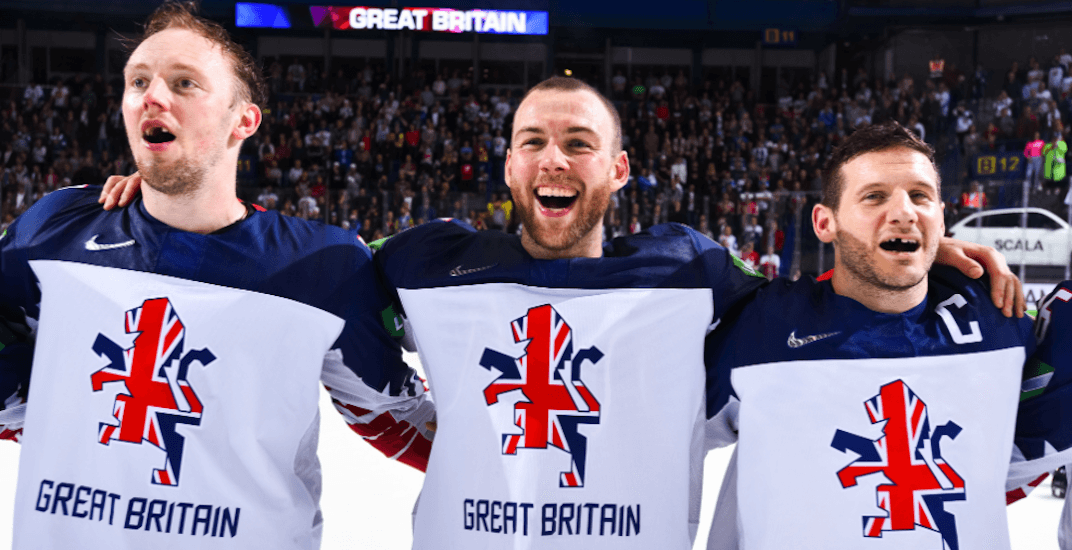 They’re the feel-good story at this year’s World Hockey Championship.

Making their first appearance at the tournament since 1994, Team Great Britain was the ultimate underdog.

Two years ago Great Britain was competing against the likes of Japan, Lithuania, Estonia, Croatia, and the Netherlands in Division I Group B – two steps below the top tournament.

After losing their first six games of this year’s World Championship in Slovakia by a combined score of 38-5, Great Britain finally got their moment of glory on Monday against France.

ICYMI: Just call Ben Davis HERO because his #overtime goal for @TeamGBicehockey keeps the team at the top level! #IIHFWorlds

Stay up to the minute with game action with the IIHF App:
 https://t.co/PDQtNtuJxc
▶️ https://t.co/yImldTg3TU pic.twitter.com/LP68hHrQIJ

The Brits overcame a 3-0 deficit to beat France 4-3 in overtime, avoiding relegation and booking their ticket to next year’s World Championship.

The historic win was Great Britain’s first at the Worlds since 1962.

Perhaps Great Britain will pick up new fans from other countries, given some of the unique moments they gave us, starting with their team song: “We’re Sh*t and We Know Who We Are.”

“We’re sh*t! And we know who we are!” Great stuff from @teamgbicehockey 😂 . 🎥: @iihfhockey

Their fans were amazing, too. After losing 6-3 to Team USA last week, they stuck around to heckle three-time Stanley Cup champion Patrick Kane during his post-game interview, chanting “Who are ya?! Who are ya?!”

But the best part about Great Britain’s surprise win has to be reading about it on the BBC website.

“Ice hockey,” as they repeatedly call it, is a fringe sport in the United Kingdom. You can tell, too, as the game report read like a soccer match (or football match, depending on where you’re reading this).

France took a 3-0 lead in the “28th minute,” apparently, before Great Britain’s comeback forced the “match” to “extra time.”

Here’s a portion of the game story:

France scored twice in six seconds to lead 3-0 in the 28th minute in Kosice.

But Robert Farmer equalised to take the match to extra time and Ben Davies grabbed the winner in added time to keep Britain up and send France out.

Britain pulled the first goal back in the 35th minute when Robert Dowd finished neatly after a pass from Ben O’Connor.

Three minutes later O’Connor’s shot was parried and Mike Hammond converted the rebound for his fourth goal of the tournament.

And in the 46th-minute Farmer brought Britain back on level terms with a shot high into the net.

Britain goaltender Ben Bowns made some crucial saves in the extended period before Davies gathered a pass from Jonathan Phillips and scored past Florian Hardy to spark wild celebrations.

Maybe they’ll learn all the hockey lingo by next year’s tournament in Switzerland.

All kidding aside, what a wonderful moment for Team Great Britain, who had great reason to celebrate.

Watch as @TeamGBicehockey celebrates their OT win to stay in the top group – plus they get some props from @HC_Men 🤜🤛 pic.twitter.com/zleNItnqIZ