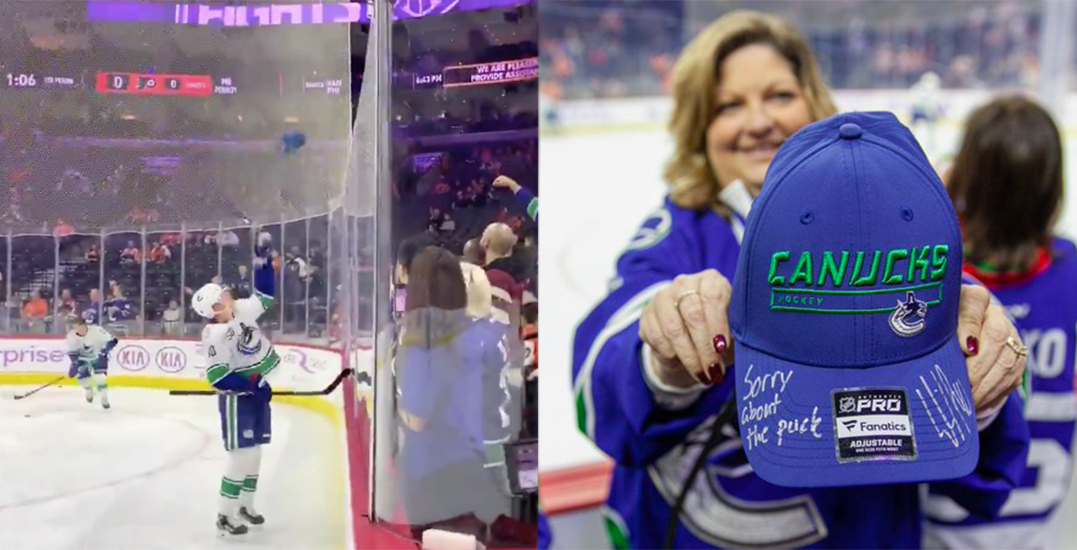 On Monday evening, the Vancouver Canucks took to the ice for an away game against the Philadelphia Flyers. Despite losing 2-1, there was one lucky Canucks fan who left the game as a winner.

Although, that might depend on your definition of “luck.”

Before the game started, a Canucks fan was struck by a flying puck that Vancouver’s Elias Pettersson fired off the crossbar during the pre-game warmup.

Fortunately, the fan appeared to be uninjured, though Pettersson was quick to make it up to her in a big way.

Petey shot a puck in warm-up that hit the crossbar and struck a #Canucks fan in the stands.

So he made it right. 💙💚 pic.twitter.com/SVIo4i8tqM

The reigning Calder Trophy winner interrupted his warmup, rushing to the bench to write a special message on a Canucks hat, before tossing it over the glass to her.

“Sorry about the puck,” wrote the flashy Swede.

Judging the smile on her face, it looks like the autographed hat was more than enough to make up for it.

Nice to meet Canucks fans wherever we are 💚💙 pic.twitter.com/ZWYUIVGuGm