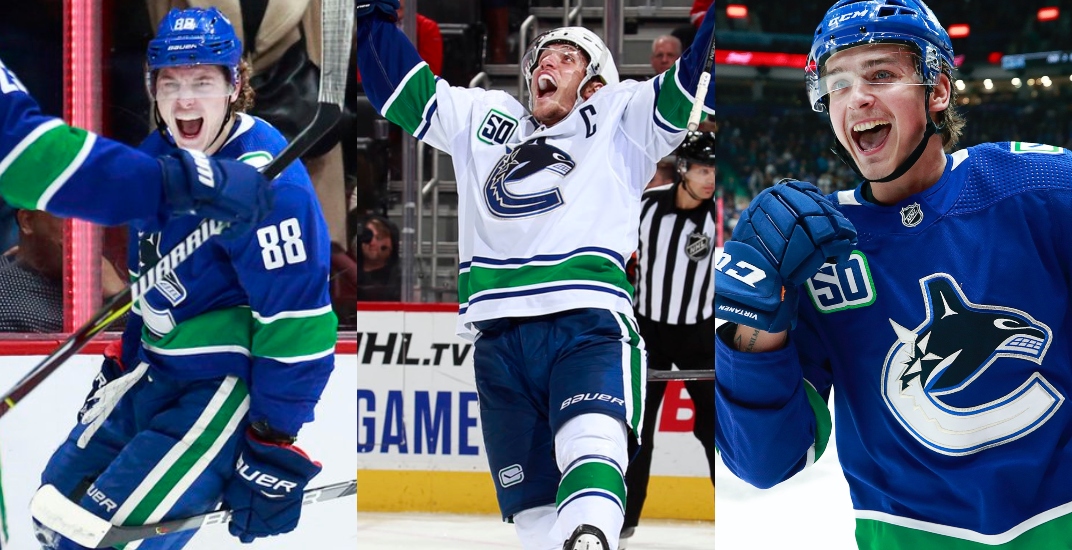 You don’t get extra points for artistic merit in hockey, though maybe you should.

Adam Gaudette has people talking recently not only about the frequency at which he’s been scoring since his latest call up, but how he celebrates his goals too.

The sophomore forward has four goals in November, and his exuberant celebrations have followed. They’re all glorious.

“I think it’s different every time, it depends where you are on the ice, what kind of goal,” Gaudette told Canucks.com.

“Maybe he just sits around in the hotel room and thinks about what he’s gonna do next,” Sven Baertschi theorized.

No #Canucks celebrate a goal quite as hard as @Hockey_Gaud. He’s been “scooping ice” since he was young. 🚨🕺🎉 pic.twitter.com/C2SUAtkGUj

That had us wondering which Canucks player has the strongest celly game. Here’s a look at the 10 best on the team currently:

Chris Tanev is a guy that doesn’t get to score often, although when he does, they tend to be game-winners, which can bring out some emotion in the usually stoic defenceman.

Tanev is a fan of the fist bump when he hits twine.

Check out this overtime game-winning celly against the Calgary Flames a few years back:

You better believe that Jay Beagle celebrates his goals, since he usually only scores them shorthanded. He’s nailed the underarm, swooping fist pump after potting a couple of shorties for the Canucks.

Against the Rangers this season:

And against the Predators last year:

If you blink, you might miss Elias Pettersson celebrating a goal. The Alien has laser-like focus and rarely lets his emotions take over when he scores.

However, when you look closely, you can see Pettersson in his natural habitat, releasing his exuberance.

It comes out most when he plays his former team.

Troy Stecher only has eight career goals, but he usually delivers a pretty lively celebration when he does hit the back of the net.

Look at that raw emotion:

There are a few guys on the Canucks who, when they score, you wouldn’t be able to tell by their lack of celebration. JT Miller and Alex Edler come to mind.

Boeser fell into that category during his rookie season in Vancouver, as a lack of celebration followed many of his highlight-reel goals. Perhaps it’s the Pettersson effect, but Boeser looks a little more juiced after goals now.

Still, the nonchalant celebration, along with thanking his teammates, are his two calling cards.

We’re okay with seeing a little more juice from Boeser though. The one-knee slide was a good look, especially in the throwback jerseys.

And who could forget how pumped he was after scoring in Tampa last season?

The guy with the nickname #ShotgunJake has to have some sort of celebration. Jake has a low-key patented one that he’s pulled a couple of times, where he holds back his first before pumping it in jubilation.

Canucks captain Bo Horvat doesn’t necessarily have a patented move, but his emotions are always evident when he scores a goal.

He’s a fan of the fist pump and often drops down on one knee for the big markers.

One of the most feisty and energetic players on the Canucks brings that same energy when he finds the back of the net. If he scores, he’s surely going to rub it in the opponent’s face.

Of course Gaudette ends up at number one on this list. He’s the guy who sparked this whole conversation after all.

There are a lot of NHL players who practice modesty when it comes to goal celebrations, but where’s the fun in that? Gaudette’s energy is infectious, and here’s hoping he pulls an Alex Ovechkin by never slowing down on the goal celebrations.

Every single one of his cellies are great…

And that includes preseason.