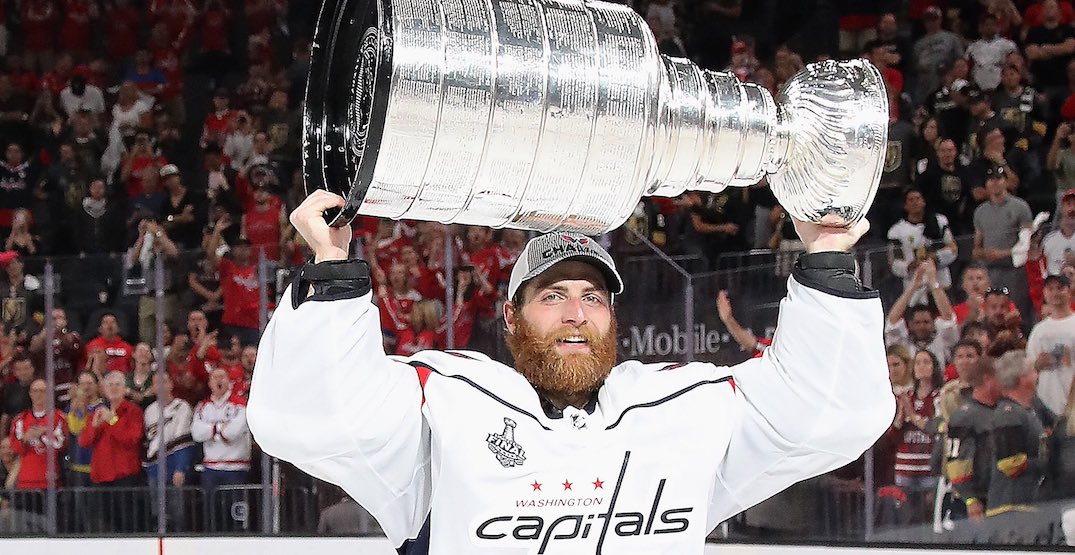 The Vancouver Canucks made a massive shake-up in net on the first day of free agency.

Just over an hour after free agency opened, the Canucks announced that they had signed Braden Holtby to a two-year, $8.6 million deal.

That officially spelled the end of Jacob Markstrom’s tenure in Vancouver. The Canucks’ team MVP for the last two seasons signed with the rival Calgary Flames on a six-year, $36 million dollar deal.

After spending the last 10 seasons as a member of the Washington Capitals, Holtby joins only his second NHL. Keep reading below to familiarize yourself with the newest member of the Canucks.

1. Holtby’s dad was a goaltender in the WHL

It’s safe to say that Holtby followed in his dad’s footsteps in the hockey world.

Holtby’s father, Greg, was a goaltender for the Saskatoon Blades from 1983-85.

Nearly 20 years later, the native of Lloydminster, Saskatchewan carried on the family tradition of Holtby’s playing for the Blades, as Saskatoon picked Braden in the ninth round of the WHL Bantam Draft.

Holtby’s sister, Taryn, was also blessed with some athletic abilities. She was a part of Saskatchewan’s team for the Scotties Tournament of Hearts in 2013.

2. His mom was a country music singer

If there are two things that Holtby is very passionate about, it’s music and sports.

You can draw that connection right to his parents. While his father was a former WHL goaltender, his mom, Tami, was actually a well-known country singer in Western Canada for the band “Walkin’ After Midnight.”

In 1998, she was named Female Vocalist and Performer of the year during the Saskatchewan Country Music Awards.

In an article from The Globe and Mail, Holtby mentioned that he’s a big fan of songwriters from the previous generation, including Bob Dylan and Warren Zevon.

3. Holtby and Markstrom were both drafted in 2008

There’s an interesting link between Holtby and Markstrom.

Both goaltenders were selected in the 2008 NHL Entry Draft. Holtby only missed being in the 2007 draft by one day, with his birthday falling on September 16, 1989.

Markstrom, who was picked 31st overall by the Florida Panthers, was the third goalie selected in that draft. Goaltenders Chet Pickard and Tom McCollum were picked ahead of Markstrom, and they combined for a grand total of three NHL games played.

Nine goaltenders in total were selected before the Capitals snagged Holtby with the second pick of Round 4. In his draft year, Holtby had middling numbers while playing on a terrible Saskatoon team. However, he turned his fortunes around in his draft-plus-one season with 40 wins in 64 games.

4. From third-string to starter in the 2012 playoffs

Holtby got a small taste of action during the 2010-11 and 2011-12 seasons with the Capitals, but in 2012 he was still the third-string goaltender behind Tomas Vokoun and Michal Neuvirth.

However, the Capitals were forced to play Holtby in their first round matchup against the Boston Bruins in 2012. Holtby allowed one goal in a Game 1 overtime loss before stopping 43 of 44 shots in a Game 2 win.

Although Vokoun and Neuvirth were healed and ready to play in Game 3, Capitals head coach at the time, Dale Hunter, kept Holtby as the starter. He eventually led Washington to a 4-3 series win against the Bruins, posting a .940 save percentage in the process.

He never looked back as Washington’s starter, right up until becoming a member of the Vancouver Canucks.

5. He owns the Bruins

On April 9, 2015, Holtby shut out the Bruins for the third time that season. That victory made him the only goaltender to beat the Bruins in a season series (of three games or more) without allowing a goal.

He’s owned Boston throughout his career, going 18-4 with .939 save percentage during regular season action. That’s the best save percentage and the most wins he has against any NHL team.

6. Led the league in wins for two straight seasons

Although he’s struggled for the past couple of years, it wasn’t that long ago that Holtby was one of the best goaltenders in hockey.

In 2015-16, Holtby tied Martin Brodeur’s NHL record for wins in a season with 48. He would end up winning the Vezina Trophy later that year.

In the following season, he led the league in wins with 42. Holtby would add to his hardware collection once again, winning the William Jennings Trophy for having the lowest goals against average in the NHL.

For years, Washington was one of those ultra-talented teams who could never find a way to win.

That changed in 2018 as Holtby helped the Capitals win the Stanley Cup, their first in the team’s 44-year history.

The netminder’s regular season performance was actually the worst of his career heading into the playoffs. However, he rebounded with a .922 save percentage during Washington’s run.

If there’s one moment that stands out during Washington’s Stanley Cup win, it’s this save that Holtby made on Alex Tuch in Game 2. That win tied the series 1-1 after Vegas won Game 1. Washington wouldn’t lose a game the rest of the way, winning the series in five games.

8. He called Demko right away after signing

Holtby’s tenure in Vancouver is off to a good start.

According to Sportsnet’s Iain MacIntyre, the 31-year-old has already asked for Demko’s number so that he could reach out to the incumbent Canucks goaltender.

One of the first things Braden Holtby did after signing with Canucks was ask for Thatcher Demko’s phone number. Holtby has to perform, but sounds like he’s going to be good teammate/mentor.

For all the sports radio talk suggesting that there’s a competition between the two goalies, it appears as if Holtby is ready to be a positive influence for Demko heading into the 2020-21 season.