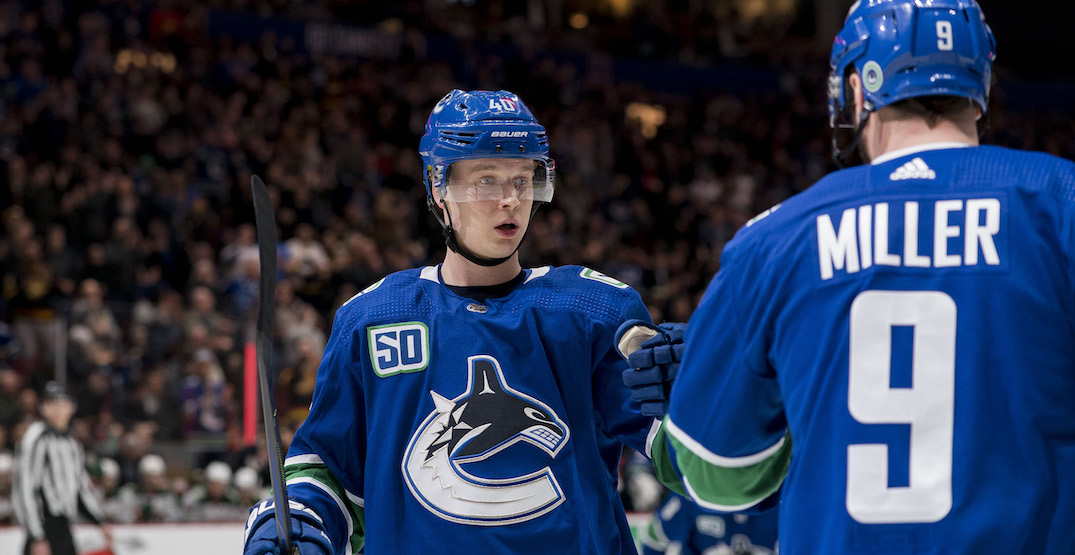 When the puck drops to start the Vancouver Canucks season tonight in Edmonton, Brock Boeser will be watching from the press box.

The good news is that Boeser skated with his Canucks teammates at practice today, and he “looks close,” according to head coach Travis Green.

“There’s a reason he’s on the trip,” Green told reporters after the morning skate. “He’s on the trip. He’s not here just to hang out. He’s here to play.”

The Canucks begin the season with a six-game road trip, playing games that matter in front of fans for the first time since March 10, 2020.

Green confirmed that Thatcher Demko will get the start in goal and that defencemen Jack Rathbone and Kyle Burroughs will be in the lineup.

The Canucks coach also referenced today’s line combinations in practice, which are shown below by Thomas Drance of The Athletic.

After experimenting with J.T. Miller at centre throughout the preseason, the 28-year-old is back in a familiar spot on Elias Pettersson’s wing. Pettersson and Miller will be joined by Alex Chiasson, who the team signed to a new contract yesterday.

Bo Horvat will play between Tanner Pearson and Conor Garland, while Nils Hoglander moves down to the third line to play with Jason Dickinson and Matthew Highmore.

Juho Lammikko, who the Canucks received from Florida in the Olli Juolevi deal, centres the fourth line with Justin Dowling and Vasily Podkolzin. It’ll be the first career game for Podkolzin, who made the team as a 20-year-old rookie.

On defence, Oliver Ekman-Larsson and Tyler Myers will be paired together, as will Quinn Hughes and Tucker Poolman. The third pairing will be Rathbone and Burroughs.