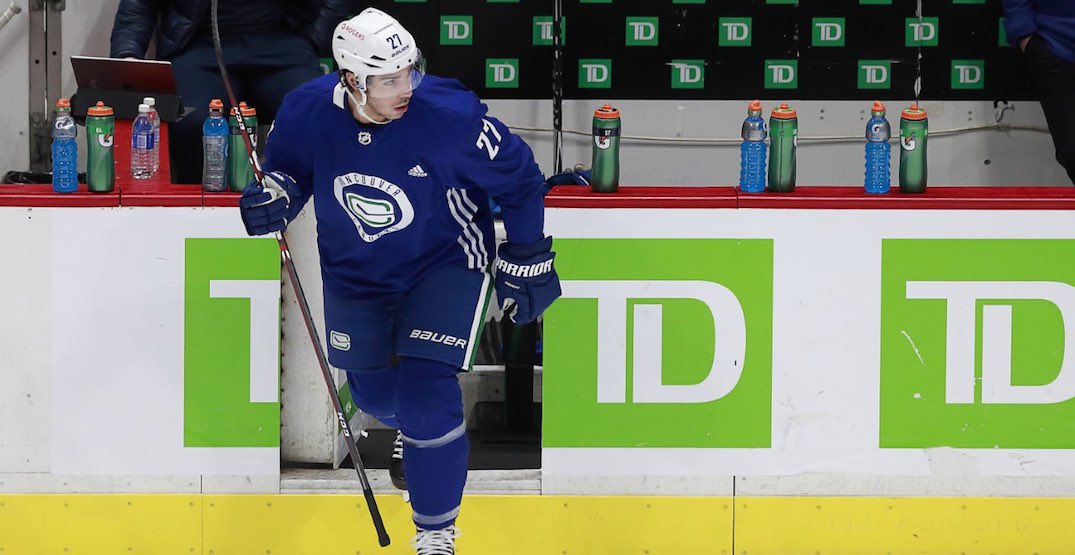 With just two days to go before the start of the NHL season, we’re beginning to get a good look at what the Vancouver Canucks lineup will look like for their first game Wednesday in Edmonton.

The Canucks placed six players on waivers today, including Loui Eriksson and Sven Baertschi. They also held a practice with 24 players, meaning that not everyone remaining in training camp got to participate.

That’s not going to be uncommon this season, as teams are allowed a taxi squad of players to be kept in reserve, due to the pandemic. So while a player like Eriksson is unlikely to be on the 23-man roster, it doesn’t necessarily mean that he’s Utica-bound.

With that said, head coach Travis Green has been consistent with his lines throughout training camp, opting to grow familiarity with his group rather than experiment with new combinations.

The Canucks’ four lines and three defence pairings appear set, as do their power play and penalty killing units.

Today’s practice was the first for newcomer Travis Hamonic, who is on a pro tryout contract, with an NHL deal likely waiting for him as the Canucks optimize their salary cap situation.

Rookie Nils Hoglander has been stapled to Bo Horvat and Tanner Pearson throughout camp, so don’t expect that to change either.

And after a rotating cast of partners throughout camp, Quinn Hughes was paired with Hamonic today, backing up speculation that was the plan all along.

“He’s played in the league a long time and I’ve watched him for a while… so I kind of know a little bit about his game,” Hughes said of his new partner after practice. “I’m excited to play with him.”

Hamonic opted out of the NHL’s return to play last summer, so he hasn’t suited up for an NHL game since February 8. He has also spent the last seven days in quarantine after arriving to Vancouver from Winnipeg. It might take time to get him up to speed, but time is not a luxury for any team right now.

Who the extras might be on the 23-man roster is less clear.

Right now, it appears that two forwards and four defencemen are battling for the three remaining spots. Forwards Zack MacEwen and Marc Michaelis both practised with the main group today, as did defencemen Jack Rathbone and Jalen Chatfield. Jordie Benn was the most noticeable absence at practice, with Green refusing to provide a reason why. He and fellow blueliner Brogan Rafferty were with Group A on Friday.

Micheal Ferland (concussion) will start the season on long-term injury reserve (LTIR), while Jayce Hawryluk appears to be banged up after he was injured in Saturday’s scrimmage.

We got a look at the Canucks’ power play and penalty killing units today.

The first unit power play is unchanged from most of last season. Nate Schmidt will quarterback the second unit, with Hoglander also joining the group.

With Eriksson on waivers, it appears Antoine Roussel will get time on the penalty kill. Hamonic was paired with Edler, while Olli Juolevi was lined up next to Tyler Myers.

There is a chance that some players will play both the power play and penalty kill regularly, with Schmidt an obvious candidate.

Don’t be surprised if the Canucks make some counterintuitive moves to their roster for salary cap purposes.

The Athletic’s Thomas Drance and CapFriendly explain it well in this thread:

Basically what I modeled in this thread, with Chatfield cast as the $700k league minimum player.

This #Canucks hockey operations group has taken a lot of flack over cap allocation, lots of it fair, but it should be noted that this an elegant solution to a complicated problem: https://t.co/q3O3tKO2XV

So don’t panic if Hoglander isn’t officially on the roster to start. The plan appears to be to give him a shot to play right away.

It’s all in the name of pressing up close to the salary cap ceiling, in order to capitalize the most on Ferland’s LTIR status.