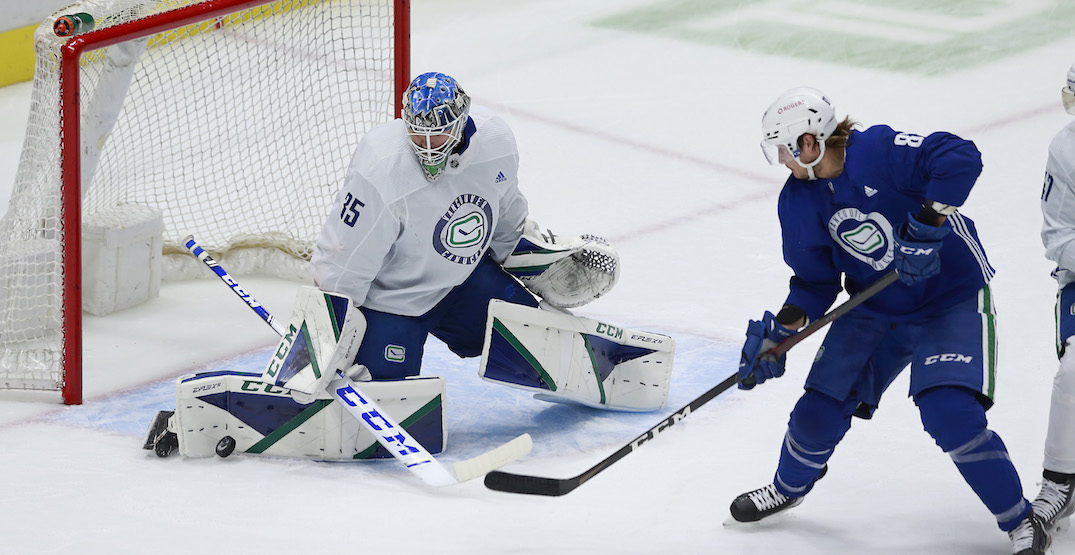 One day after cancelling practice due to a potential COVID-19 exposure, the Vancouver Canucks were back on the ice at Rogers Arena today. The team chose not to step on the ice yesterday because an unnamed player tested positive for COVID-19.

That positive test later turned out to be a “false positive,” according to head coach Travis Green.

“We had a false positive test come in,” Green said after practice today. “At the time we didn’t know if it was false positive or not. We wanted to take the proper precautions and just felt like it was best if we stayed off the ice and waited to see.”

NHL players are tested every day, and league protocols dictate what to do in a situation like the Canucks were put in on Sunday. The player that tested positive was tested again, and returned a negative test. That allowed the team to step back onto the ice today.

“We’ve seen it in other sports, we’ve already seen it in our sport, so it’s probably going to be that way, it’s going to happen. It’s a little bit of a wake-up call to just making sure that we’re doing the right things, and also the next time it happens, it won’t be as big of a surprise. I felt like … it was best that we gave him the day off yesterday mentally too.”

The Canucks were the fourth NHL team to have to cancel a practice due to COVID-19, though the only team to have an outbreak so far are the Dallas Stars.

“You don’t want this to happen to your team, you don’t want it to happen to any players,” said Canucks captain Bo Horvat. “I think it was a little bit of a wake-up call for everybody, just to keep following the proper protocols to keep everybody safe. Luckily, we’re told there was a false positive, and I’m glad this kind of happened to give everybody a wake up call now [rather] than later on. Just happy everybody’s safe and we’ve just got to keep on the proper protocols to make sure everybody’s safe and healthy.”