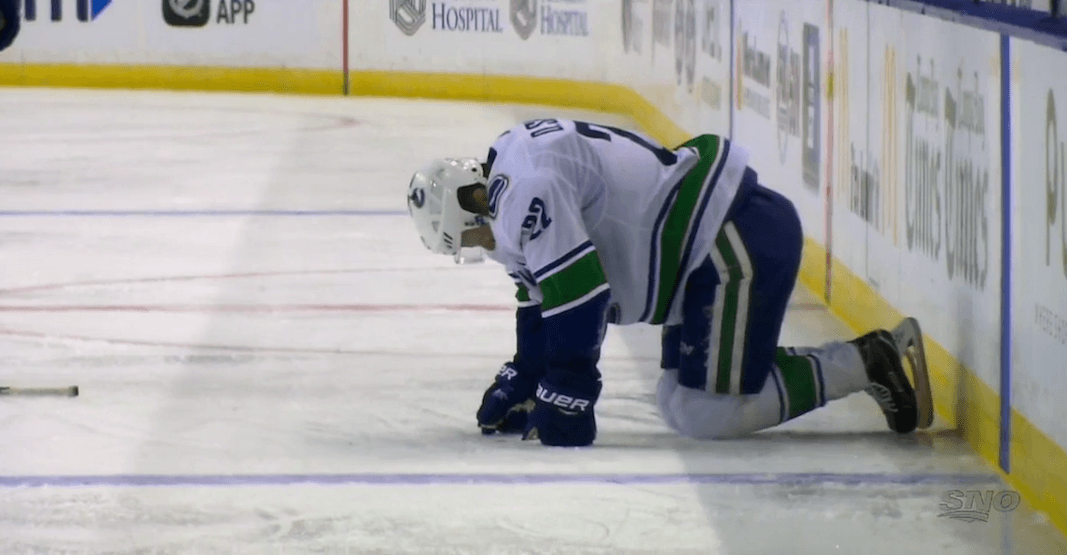 But in the case of the Vancouver Canucks on Thursday, it was fours.

Four different players had to leave the game due to injury at some point during the night, with the third one to Markus Granlund looking like it could be serious.

Oh, and that’s on top of Sam Gagner and Brendan Gaunce getting injured against Florida on Tuesday.

The Canucks actually started this game well and matched Tampa’s pace for the first 10 minutes, but things started to fall apart after Chris Tanev was hobbled after blocking a shot, leading to the Lightning’s first goal.

Tampa Bay proved why they’re the best team in the league, beating up on the Canucks in a 5-2 final.

It wasn’t all bad though – Brock Boeser scored, and Bo Horvat connected with Sven Baertschi on a nice goal as well.

Let’s start with some good news before we get into all that bad stuff.

In a game where nothing was going their way, there was Boeser to save the day.

Well, sort of. It was still a total write-off of a game, but Boeser scoring made the pain sorta kinda worth it. I guess.

Boeser got his point#Canucks win

Here’s the goal, which took a fortuitous bounce off the stick of Andrej Sustr for Boeser’s 26th tally of the campaign.

That was the only lucky bounce the Canucks had all game.

These days it seems like more a matter of when, not if, Tanev will get injured.

Tanev blocked a shot that appeared to go off the back of his leg, and could hardly move as he stayed on the ice. Nikita Kucherov eventually scored on the shift to open the scoring.

Tanev went to the dressing room but returned for the second period, though he still looked to be in a bit of pain.

Not long after Tanev went down, Alex Edler joined him in the dressing room after missing a hit on Kucherov and going face-first into the boards. Ouch.

Edler was out a bit longer than Tanev, though he eventually returned midway through the second.

Thankfully so, because as bad as the Canucks lost, it would’ve been twice as bad if they had to go the rest of the game without their two best defencemen.

Fun fact: Troy Stecher is now the only defenceman on the canucks roster who can actually play hockey

It’s been a rough season for Markus Granlund. His offensive production is half of what he had last season (0.46 points-per-game down to 0.23), although that is in large part due to being used in a checking role this season under Travis Green.

Granlund's ankle. It should not bend that way. pic.twitter.com/K7DJBTDHGh

I’m no doctor, but that doesn’t look good.

If you thought that looked ugly, maybe just scroll past this one without looking.

Daniel didn’t even miss a shift despite a badly bloodied mouth, and picked up an assist on the Boeser power play goal less than two minutes later.

The Canucks signed 27-year-old Darren Archibald to a contract on Wednesday, and after getting beat up on by the Lightning on Thursday you’d have to think he draws into the lineup on Friday in Carolina.

I’ve always been a fan of Archibald’s game, he’s the perfect fourth liner. He can hit, play solid defensively, and his speed and vision are adequate for the NHL level.

He’s only played 13 NHL games, and those all came in the 2013-14 season, but I think he can establish himself as an everyday guy if given the chance down the stretch here.

Plus, maybe Archibald’s physical presence could be enough to convince Jim Benning that Erik Gudbranson is expendable.

The Canucks penalty kill this season has not been good. This has been well documented.

Here is some more documentation.

Noted tough defencemen Erik Gudbranson can't clear Yanni Gourde out of the way and the #Canucks are down by two. pic.twitter.com/dZXLMjqptN

Why are both Gudbranson and Troy Stecher at the hash marks while Yanni Gourde stands alone in front? Your guess is as good as mine.

But in their defence, Gourde is so small they may not have even seen him at all.

I call it the sandwich method; start with good news, cram all the bad in the middle, and end with more good news.

And this good news is that – after a ‘sophomore slump’ in the first half of the season – the Stecher of last year appears to be back.

After recording only three points in his first 36 games of the season, the 23-year-old doubled that total in the first two games of February, and appears to have his confidence back.

This was a great play by Stecher, fooling Victor Hedman and managing a shot and rebound for a good scoring chance.

The injuries took up much of the space in this SixPack, but I felt obligated to showcase Sven Baertschi’s late goal, which came after a great play from Bo Horvat.

The defenceman he blows past before making that pass? Victor Hedman.