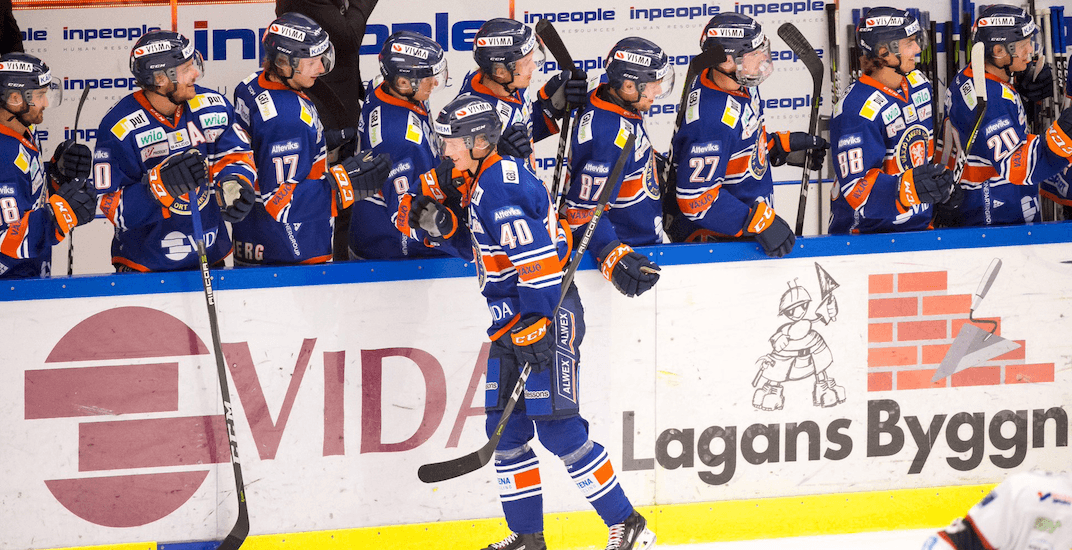 When the Vancouver Canucks selected Elias Pettersson fifth overall at the 2017 draft, they picked him to become their next No. 1 centre. Now, after spending the first half of the season on the wing, he is finally getting a chance to prove his worth down the middle with his club team in Sweden.

When Pettersson returned from the World Juniors, Växjö Lakers head coach Sam Hallam decided it was time to give it a try. He made Pettersson the team’s second-line centre, where he’s spending most of his time with Finnish wingers Janne Pesonen and Tuomas Kiiskinen.

And so far, he’s been performing well.

The 19-year-old has appeared in 11 games in SHL and CHL (Champions Hockey League) action since the World Juniors, recording 12 points (8-4-12), including three goals and two assists on the man advantage.

After missing games while representing his country, Pettersson has climbed back near the top of the SHL scoring race – sitting in third spot with 45 points in 35 games. He leads the league in points per game and despite missing time he’s just three points back of the top SHL scorer.

Thriving on the power play

Pettersson is known for his power-play prowess. More specifically, he likes to score – like this:

Is it just me or have we seen this before? #Canucks prospect Elias Pettersson with a power-play tally from his usual spot. pic.twitter.com/K3r1Tl8NxB

The above is Växjö’s go-to power-play strategy. Get the puck to Pettersson, who’ll fire it at the net from the right circle. It’s working.

But, the one-timer isn’t his only tool. Pettersson is a very mobile skater with strong puck skills, and he uses that to his advantage. Even when pressured by multiple defenders, he finds ways to create room for himself and distribute the puck to his teammates.

With his skill and creativity, he also finds ways to avoid defenders and set teammates up for scoring chances.

There is absolutely no doubt that Pettersson can be a dangerous power-play contributor at the highest level. So with rookie sensation Brock Boeser already in Vancouver, Canucks fans have a lot to be excited for.

On even strength, things are going well as well, but there is still work to be done.

Five of Pettersson’s post-WJC goals came at even strength, and there are some tendencies to see here as well.

Pettersson has outstanding hockey sense. He sees the ice extremely well and is able to anticipate plays early and get in position. He doesn’t just crash the net hoping for his teammates to do the work. Rather, he sneaks up behind the defence to get open for high-danger shots.

Back in the SHL, #Canucks prospect Elias Pettersson scores the go-ahead goal against Malmö.

In addition, Pettersson has an extremely accurate wrist shot. His release could certainly be improved, as he needs a full wind-up to get his shots off with power, but his accuracy is enough to beat professional goaltenders. We saw it multiple times at the World Juniors as well, and he’s doing the same thing at the pro level.

#Canucks prospect Elias Pettersson gets his second of the night with a fantastic snipe. pic.twitter.com/HdGriA54bB

All of the above is extremely promising, and Pettersson has all the tools to become a first-line forward in the NHL. However, he still has work to do, and his stat line can be a little bit misleading.

As impressive as his success in the SHL and CHL is, it’s not the NHL. In the NHL, opponents are bigger, faster, smarter, and more skilled, and the goaltenders are much better as well. Hence, it’s almost impossible to envision some of Pettersson’s goals in the NHL.

In the previous clip, Växjö had a big lead already, and Pettersson was completely uncovered in the slot. Would that happen in the NHL?

Prior to his PP goal, Pettersson scored this beauty. Beats three defenders and the goalie all by himself. #Canucks pic.twitter.com/8EiQSsMIdx

What about the goalie in this clip?

Although the numbers are there, Pettersson often disappears at even strength. Listed at 6-foot-2 and 165 pounds, he struggles physically and needs to rely entirely on his puck skills. But without the extra room of a man advantage, getting through isn’t easy – and the smaller North American ice surface won’t help.

Pettersson is a forward with elite offensive potential, so his defensive game isn’t the No. 1 priority. But with a shift to centre comes added responsibility.

Although teams have moved away from using position-specific roles in many situations, simply referring to forwards as F1, F2, and F3 in the offensive zone, on the forecheck, and the backcheck, centres are generally expected to support the defence more than the wingers.

In this regard, Pettersson’s play hasn’t been entirely satisfying.

Again, Pettersson’s hockey sense helps him a lot. He can anticipate plays before they happen, allowing him to retreat and be in position in case of turnovers, and occasionally even turn that into a scoring chance.

#Canucks prospect Elias Pettersson intercepts the puck at the blue line, then walks in and picks a corner.

But even though he generally knows what’s happening, he often doesn’t get engaged.

In the clip below, Pettersson circles back as he sees his defender carrying the puck through the neutral zone. When his teammate turns the puck over, Pettersson sees the counter attack developing and makes sure he’s in position. He gets up to speed and moves in on the attacker.

But once he gets there, he’s extremely passive. He keeps his stick blade between his opponent and the net but doesn’t poke-check or attempt to push the attacker to the outside, resulting in a shot against.

In a recent SHL contest, he was equally passive, this time resulting in a goal.

Pettersson is the last backchecker. He moves toward the D-zone slowly, as his check goes for a change. Another attacker comes off the bench in his place, and Pettersson kind of, sort of moves in with him. But again, he doesn’t really get engaged.

This goal against wasn’t Pettersson’s fault, as Växjö’s defence was a mess as a whole in this sequence. However, had Pettersson moved in faster and more aggressively, he might have had a chance to intervene with the goal scorer.

Once set up in defensive formation, Pettersson looks better, but still has a lot of room for improvement. Rather than simply keeping an eye on the defender at the blue line and trying to cover high passing lanes, the centre needs to support defenders along the boards and cover for anyone who gets drawn out of position.

Here, too, a few more pounds to his frame wouldn’t hurt, but Pettersson has the tools to be successful. Moving from wing to centre is always an adjustment, and it’s not an easy one to make at the pro level.

With Boeser jumping into the NHL straight out of college, Canucks fans have high expectations for Pettersson – and rightfully so. TSN’s Craig Button recently named him the best NHL-affiliated prospect outside of the league.

So his ceiling is high, but we should be cautious nonetheless.

As of today, Pettersson can still be a defensive liability at centre. Växjö sits comfortably in first place in the SHL with a 17-point lead on second-place Djurgårdens IF, so they are in a perfect position to lead a young player like Pettersson into a bigger role. This is great news for the Canucks, but it doesn’t mean he’s guaranteed to stay at centre.

Second, Pettersson was quite underwhelming at even-strength play in the World Juniors, and is confirming that in league play. Again, he has all the tools to succeed, but he’s struggling without the extra space. This could potentially become an issue once he makes the move to North America.

Pettersson’s contract in Sweden is expiring at the end of the year, and my guess is that he will sign with the Canucks and move to North America for the 2018-19 campaign. If he has a strong training camp, there’s a solid chance that he’ll make the big club as well, especially considering Vancouver’s lack of depth.

However, the move to North America will be a huge adjustment for Pettersson, more so than for an NCAA prospect like Boeser. And if the Canucks want him to stick at centre, a detour through Utica might not be the worst scenario.