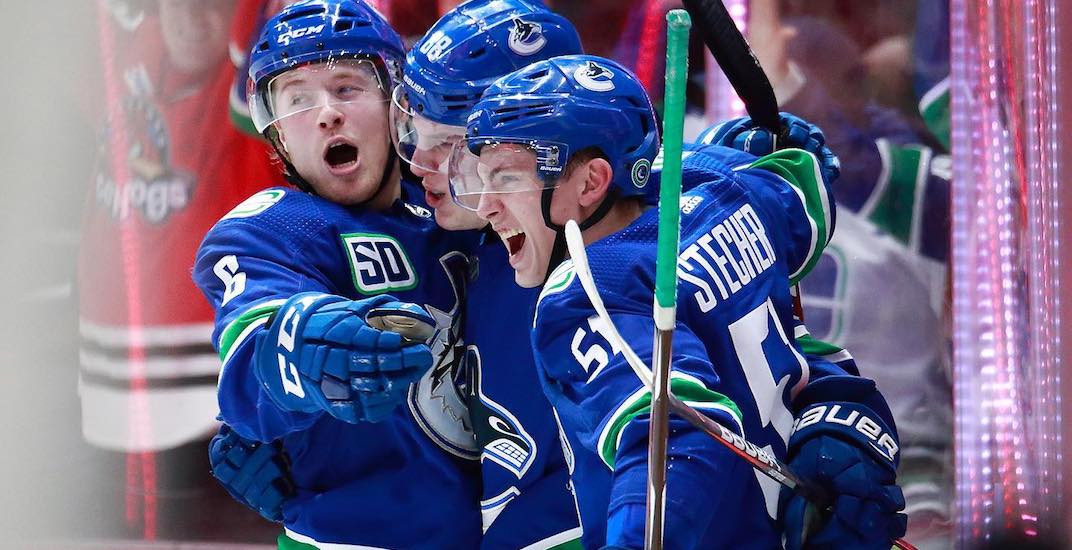 The Vancouver Canucks have been through some ups and downs in half a season.

A great start. A tough November.

At one point in December Canucks fans were freaking out, ready to fire the GM and coach. They’d seen this movie before.

But then the team turned it around.

Thursday’s 7-5 comeback win against the Chicago Blackhawks was certainly far from perfect. Travis Green quipped: “A famous coach once told me that you don’t always paint a portrait. Sometimes you paint a barn.”

However they did it, the win was Vancouver’s sixth in a row — meaning the Canucks are now the hottest team in the NHL as owners of the league’s longest current winning streak.

They’re also precisely at the midway point of the season, sitting in a playoff spot with 48 points and multiple games in hand on every Pacific Division team close to them. 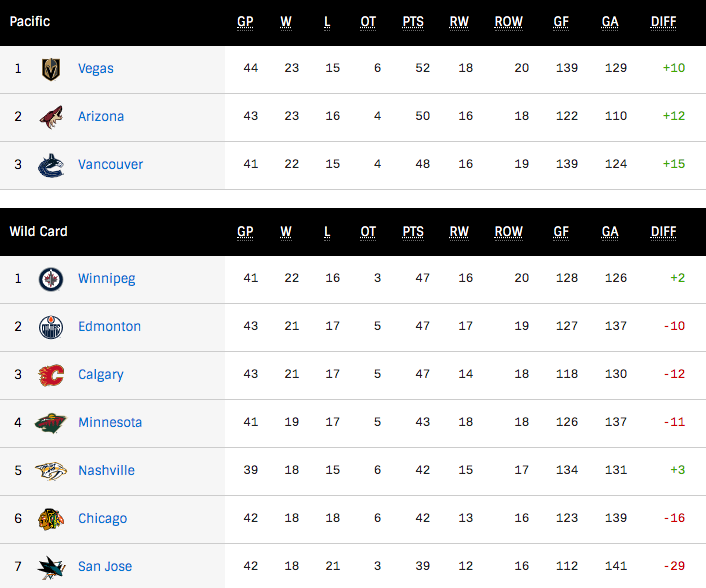 They’re far from comfortable, just one point above the playoff bar, but Vancouver is on pace for a playoff season.

If the Canucks can match their first half point total, they would finish the season with 96 points — a total good enough for a playoff spot in the West in 11 of 13 seasons since the NHL introduced the shootout.

“I believe in this group,” Green told reporters after Thursday’s win. “I really believe that our team and our organization is escalating in the right direction.

“We want a team that plays a certain style, we want to improve and get better — that’s the expectation this season and our goal is to make the playoffs. We’re halfway through the year. We’ve got another half and we’ve got to continue to push.”

This time it’s different… it has to be

With 41 games left in the season, there’s still a lot of time for things to go off the rails — we know this in Vancouver more than most other NHL cities.

But through half a season, this is an improved team in nearly every aspect.

Their goaltending is better — both Jacob Markstrom and backup Thatcher Demko — than any season since the Roberto Luongo-Cory Schneider tandem split up.

While Jordie Benn has struggled, a player of his profile would not be a healthy scratch in four straight games in years past. Oscar Fantenberg has been better than expected.

Alex Edler still plays the most minutes on the back end, but his pairing is no longer the only option to match up against the other team’s top lines. Quinn Hughes and Chris Tanev can play that role at times, as they did against Connor McDavid when the Canucks beat the Edmonton Oilers.

Heading into this season, many observers wondered if the Canucks could put together three scoring lines — particularly if Brandon Sutter was centring the third line.

Injuries to Sutter have solidified Adam Gaudette’s role, and Vancouver now most certainly has three lines that can score.

Gaudette got the winning-goal on Thursday, but it was his line’s usage when the score was 4-2 for Chicago that got my attention. Green called a timeout, and threw Gaudette’s line over the boards for the next shift.

And why not? Gaudette now has 18 points in 31 games — a 48-point pace if he played 82 games. His linemates are no slouches either. Jake Virtanen is fifth on the team in even strength points and is on pace for 24 goals. Antoine Roussel can seemingly be used anywhere in the lineup, including the penalty kill and power play, and injects energy everywhere.

“That’s the way [our line] has got to play if we want to play in this league: high intensity and hard on pucks, and hard on their team. Make life difficult for them,” Gaudette said after the Blackhawks game.

Gaudette has some maturing to do as a player still, but that’s good news. He’s likely to get better.

The Canucks have a 22-15-4 record, three wins better than they did at the midway point of last season. But Vancouver’s problem last season wasn’t their first half, it was the final 41 games when they went 16-18-7.

It’s an old, tired cliche, but it’s appropriate for the Canucks this season.

And they’ve all taken a step forward. Just look at this list of forwards who are on pace for career years:

While improvements were expected from Pettersson, Boeser, and Horvat, Miller has been way better than expected.

Getting Pearson for Erik Gudbranson was an absolute steal of a trade for the Canucks.

So was the Josh Leivo trade, for that matter. Were it not for an unfortunate injury, Leivo would be on pace for about 43 points — nearly double his previous career-high.

Even Alex Edler, who has missed 10 games this season due to injury, has 20 points. If he can double that point total, he’ll have his first 40-point season in eight years — despite the fact that he’s been moved off the power play.

Speaking of the power play, that’s also been a major reason for Vancouver’s success. They have the No. 4 power play in the NHL, of which both units have contributed to.

Look, one more three-game losing streak will probably mean freak out time again — welcome to Vancouver. That’s the nature of the NHL though. Making the playoffs is really hard to do, which is why good teams miss them every year.

But if you were to map out a scenario by which the Canucks would make it in, they’ve checked most of the boxes.

The trick now will be to duplicate that effort in the second half of the season.