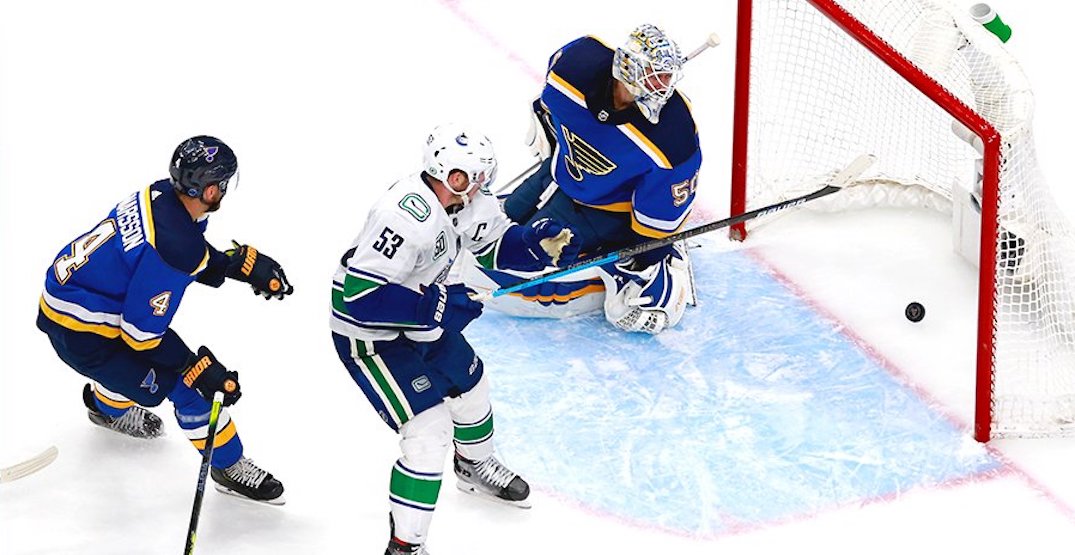 Don't sleep on the Hughes pass to set up Horvat – it was as nice as the goal! pic.twitter.com/xFr4PXDn5T

Nolan Baumgartner had to watch through the tablet when Hughes made the winning pass to Horvat. 😭 #Canucks pic.twitter.com/xwXXRHTEE9

Horvat was sent on a breakaway after receiving a tremendous stretch bank pass from Quinn Hughes. The Canucks captain made no mistake, beating Blues goalie Jordan Binnington between the legs to win the game. The goal was Horvat’s second of the game, as he also scored on a breakaway, shorthanded in the first period.

The Blues would have won the game moments earlier if not for a game-saving save by Elias Pettersson (yes, you read that right), as Jacob Markstrom was scrambling back to his net.

The Canucks took a 3-1 lead in the third period, but the Blues fought back, getting a goal from Sammy Blais midway through the period and David Perron with seven seconds left to send the game to overtime.

Perron’s goal was initially disallowed, as the referees on the ice deemed it was scored with a high stick. The call was reversed after video replay.

Earlier in the game, J.T. Miller had a goal called back after a successful coach’s challenge by St. Louis deemed he was offside.

The story of the game prior to the Blues comeback was special teams. St. Louis controlled most of the play throughout the game at five-on-five and outshot Vancouver 37-25, but the Canucks’ hot power play did its damage.

Tanner Pearson scored Vancouver’s first power play goal, converting a beautiful saucer pass from Elias Pettersson midway through the second period. That goal came after a stretch of more than 11 minutes the Canucks went without registering a shot on Binnington.

Pettersson scored a goal of his own with the man advantage early in the third period, batting the puck out of mid-air following a rebound from a shot by Brock Boeser.

Another storyline in the game was missed calls by the referees, which benefitted the Blues. Brandon Sutter was hit from behind late in the second period, and St. Louis scored on the ensuing power play when Jay Beagle retaliated to defend his teammate. Blais’ goal was scored after Alex Edler was high-sticked.

Tyler Myers was injured in the game after being crosschecked in the back by Brayden Schenn. He left the game and did not return.

Regardless, the Canucks are rolling, having won five postseason games in a row for the first time since 2009.

The Canucks and Blues will play back-to-back games for Game 3 and Game 4, both 7:30 pm PT starts on Sunday and Monday. Vancouver will be the “home” team for the next two games, meaning Canucks coach Travis Green will get last line change.