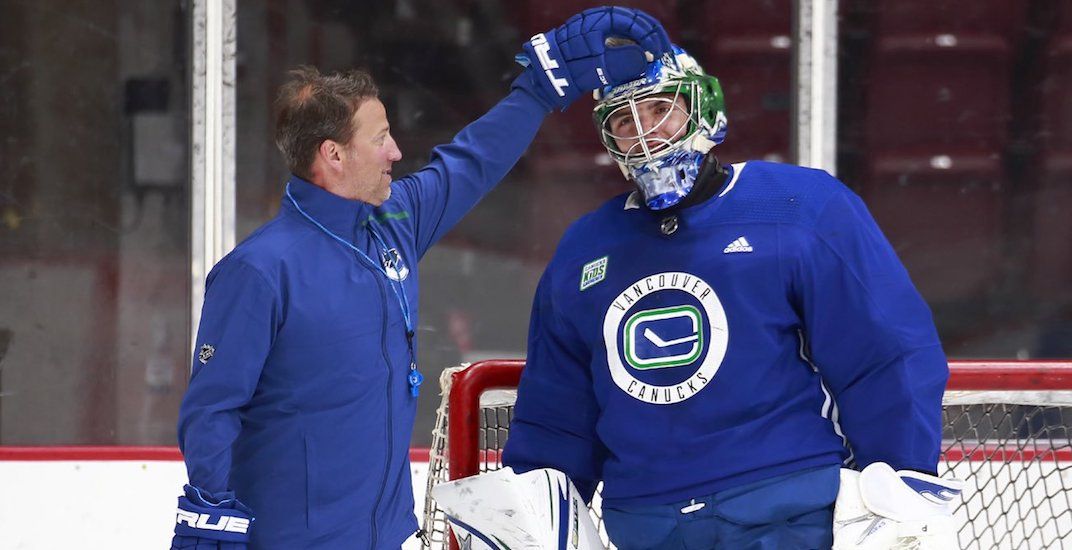 Listed at 6-foot-0, calling DiPietro ‘small’ may seem odd to some, but it’s true when compared to many of the behemoths that play his position in today’s NHL. Indeed, he’s six inches shorter than Jacob Markstrom.

But the 20-year-old from Windsor, Ontario is determined to prove he has the skill to overcome any kind of height disadvantage.

“Height for some reason is a big factor [in goaltending] right now,” DiPietro told Daily Hive at Canucks Prospects Camp this weekend. “At the end of the day it’s all about what makes me successful in the net and that’s my athletic ability, my ability to react as well as use my length, I have quite a big wingspan.”

It’s a great mindset to have, and one the promising netminder will need to continue to have as he makes the transition to the professional level. DiPietro will begin his rookie season in the AHL, with the Utica Comets in October.

DiPietro had a terrific junior hockey career, winning the Memorial Cup at age 17, before being named OHL Goaltender of the Year the following season. Then last year, he was arguably Team Canada’s best player at the World Juniors.

The transition to pro hockey is never an easy one, especially for goaltenders. That difficulty is increased further for smaller goalies where pro shooters are better at picking the corners of the net.

A third-round pick by the Canucks in 2017, DiPietro got his first taste of NHL action much earlier than expected when injury problems forced the team to call him up from junior last season.

DiPietro is soaking it all in.

“This is wild. I’m so excited right now.” pic.twitter.com/mvTC2tcjTo

He was never supposed to play, but with both Jacob Markstrom and Thatcher Demko injured and no options available in Utica, they had no other choice.

The result was a 7-2 loss against the San Jose Sharks, an experience DiPietro said was bittersweet.

“I think it helped me. It was an eye-opener on things I needed to work on and really attack this summer and I think I did a pretty good job at that. I still look at that game with a little bitterness obviously because you’re not gonna get that first [game] back. It was kind of a unique situation but I’m really happy [that] my dream came true to play in the NHL. Now it’s just working to get back to that on a daily basis.”

Another difficult experience for DiPietro last year was the ankle injury that cut short a promising OHL playoff run with the Ottawa 67’s. He was on an incredible run with a 13-0 record, in the middle of the OHL Finals when a high ankle sprain put an end to his season.

#Canucks prospect Michael DiPietro was forced to leave today’s @Ottawa67sHockey game in the first period due to this injury ⬇️pic.twitter.com/TiSrP5Nivy

“At first it was frustrating,” DiPietro admitted. “[I was] having a fun run, feeling comfortable, everything seemed to be working and then [the injury] goes down – it’s frustrating. But at the same time I didn’t want to force it. I’m a guy who’s very stubborn in the sense of just wanting to get back on the ice but I knew I had to make sure my health came first.”

DiPietro has now had a few months to get the ankle back up to game speed and at the first day of Prospects Camp on Saturday, he looked excellent. His positioning and movements were very sharp and his athleticism was on full display, at one point creating a buzz amongst fans in attendance with a diving stick save on a 2-on-0 rush.

Goaltending is a position that requires a great deal of mental stability, maturity, and fortitude, and DiPietro having that in spades at such a young age is encouraging for his development.

“There’s certain characteristics that I have that other goalies don’t have, and [vice-versa], and that’s okay,” DiPietro acknowledged.

“It’s what makes us unique – no goalie is the same. If you look through all 62 NHL goalies, nobody plays the exact same way so I have to find my niche where I can play and be successful at the pro level.”