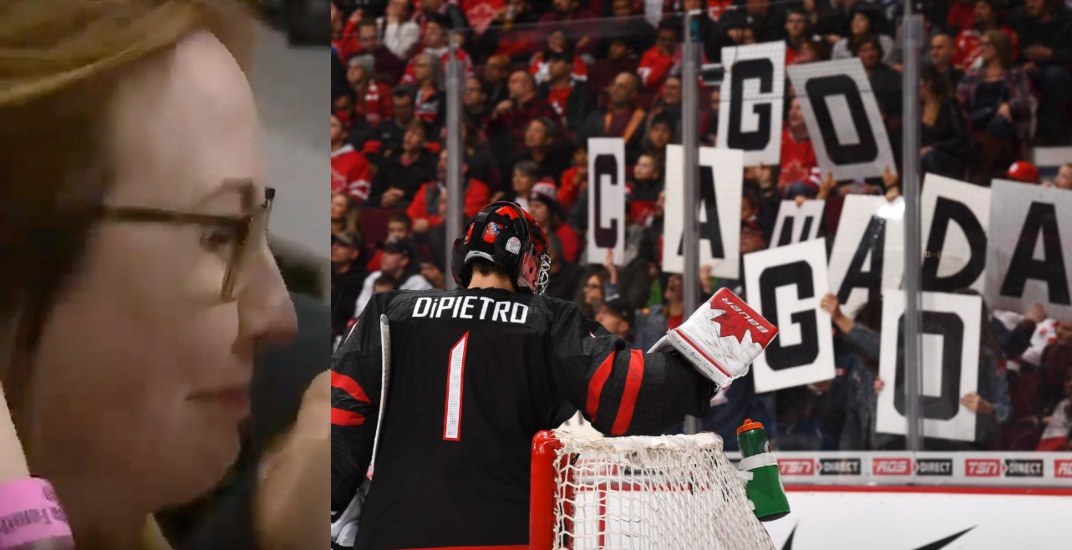 Even in a loss, Team Canada goaltender Michael DiPietro was outstanding in net again on Wednesday.

With his team being outshot and hanging on to a 1-0 lead in Wednesday’s quarter-final against Finland at the World Juniors, fans showed their appreciation for the Amherstburg, Ontario native.

After some great clutch saves by the 19-year-old Vancouver Canucks draft pick, the crowd at Rogers Arena began chanting his name.

As boisterous chants of “Di-Pi-etro” filled the arena, the goaltender’s stepmom (his birth mother passed away when he was five years old) was overcome with emotion.

You think there’s pressure on the players in the World Juniors? It may be more nerve wracking for their parents, as this feature illustrates:

Will you be watching Canada/Denmark tonight? Mike DiPietro's mom might be. Or she might not be. It’s complicated.#WorldJuniors pic.twitter.com/cagB2oY7Ym

DiPietro stopped 32 of 34 shots in the game, and didn’t have a chance to stop either goal that beat him. The first was a fluke goal off a skate in front of him, while the overtime goal took a deflection off his teammate’s stick.

He was named Player of the Game for Canada for a second consecutive game, and once again, he heard the love from the Vancouver crowd.

DiPietro was touched by the show of support from the crowd, but was still bitterly disappointed by the crushing loss.

“To lose like that it’s a tough pill to swallow and I’m at a loss for words right now,” DiPietro told reporters after the game. “It’s definitely not how I pictured this tournament going and it’s really disappointing.

“It’s nice to hear and special to hear, but I entered this tournament not for my own personal gain, it was for the team and the country. Winning is way more important than any accolade a person can get. We have a family inside our [dressing] room. Although it was cool to hear, it’s definitely not the outcome [we wanted].”

DiPietro finishes the tournament with a .952 save percentage and 1.23 goals against average, allowing just five goals in four games.