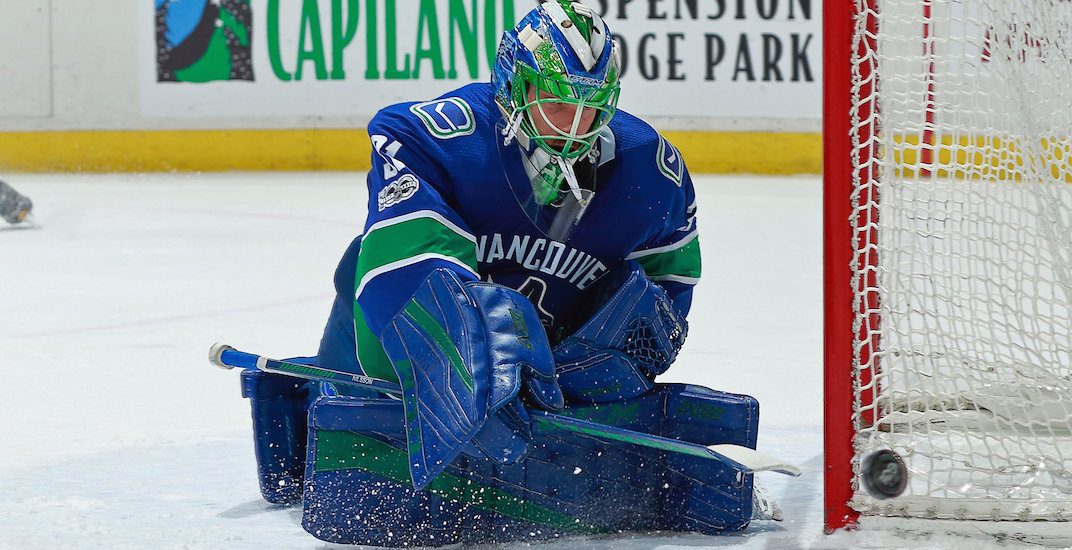 Canucks players have been supporting gay pride initiatives for a number of years now.

The Vancouver Pride Parade has had at least one Canucks players marching in it for a while now for instance, with Erik Gudbranson, Troy Stecher, and Jake Virtanen taking part this August.

But rarely do we see hockey players show their support for pride in-game given they have to wear a uniform.

Canucks goaltender Anders Nilsson has found a way though, displaying the pride flag on the back of his mask this season.

.@Jake_Virtanen returns to the line-up, Nilsson starts in goal vs. the Blues, said Coach Green. pic.twitter.com/tYHloWdaCv

Nilsson will continue to use the mask above for home games, but has added a new mask for away games that he will debut on team’s road trip that kicks off Tuesday in Philadelphia.

The 27-year-old Swedish netminder will continue to keep his nod to the LGBTQ community on both masks, as he says, “to support my gay friends.”

A look at Nilsson’s new mask: matte on the sides, glossy on top. His son Mio and fiancé (pregnant silhouette) are on the top left and right corners, while a bear (“symbol from back home”) and pride flag (“to support my gay friends”) are on the back. 👌 pic.twitter.com/bBxPlULVhs

The mask also has a portrait of his two-year-old son Mio, as well as a silhouette of his pregnant wife Emelie.

Anders Nilsson wanted newborn son on new Canucks mask but couldn’t wait for birth, so he had @artofdave include his pregnant fiancé's belly silhouette instead: https://t.co/LmMyk5qnfU pic.twitter.com/DRbXRVhdO7

The Nilssons’ son Loui just missed the cut for the newest mask, coming into the world two weeks ago. Guess he’ll have to wait until next year’s redesign for his portrait.