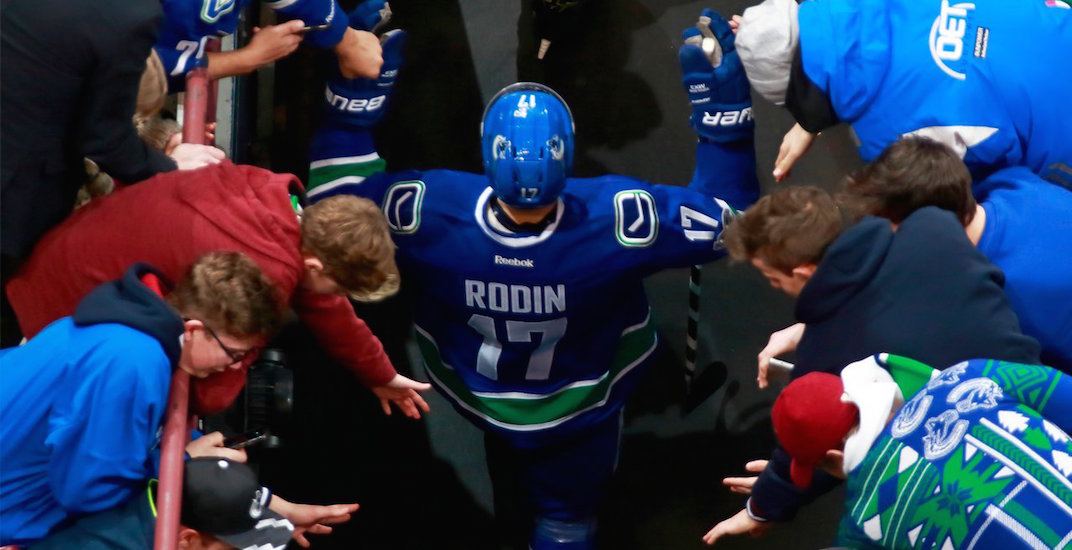 Anton Rodin, we hardly knew you.

The Canucks have announced that the 26-year-old Swedish winger has been placed on unconditional waivers, for the purpose of being released from his contract.

“Anton asked to be released from his contract,” Canucks general manager Jim Benning said in a team-released statement. “We value the skill and depth he adds to our team but ultimately it was important to respect Anton’s request to move on.”

The move will allow Rodin to go back to Europe, where he will reportedly sign with HC Davos in Switzerland if he clears waivers as expected. If you’re a fan of the Spengler Cup, you might be happy to know that Rodin should play in it, as Davos is the host.

Given Rodin’s age (he turns 27 tomorrow), this is likely the last we’ll ever see of him in North America.

And what a strange run it has been.

Rodin has completed the most bizarre eight-year run in Canucks history.

Drafted in the second round (53rd overall) by the Canucks in 2009, he didn’t adapt well to the North American game. He played two seasons with the Chicago Wolves, the Canucks’ AHL affiliate at the time, compiling just 41 points in 111 games.

After finishing 13th in scoring on the Canucks’ farm team in 2012-13 he left for the Swedish Hockey League (SHL), thought to be never heard of again. He had the makings of a draft bust – something we’ve become accustomed to seeing around these parts.

But then something happened.

Rodin found his game in his native country, scoring 112 points in 134 games spread over three seasons with Brynas IF Gavle.

In his last year in Sweden, he scored 37 points in 33 games before a knee injury cut his season short. Still, he did enough to earn SHL MVP honours.

Through it all, the Canucks kept his rights, and offered him a contract in the summer of 2016. Then just 25, it was a second chance for a skilled player on a team that needed an injection of skill.

But then it got weirder.

He wasn’t at 100% health during the preseason last year, but looked good, managing five points (2-3-5) in five games. He re-aggravated his knee injury though, and would miss the next three months of game action.

When he finally made his NHL debut on December 23 last year, he set a Canucks record. No player drafted in team history had waited longer than Rodin – seven years, five months, and 26 days – to make his NHL debut.

Rodin ended up playing three games with the Canucks last season, but dressed for four. Oddly enough, three of the four games were against the Flames.

The last time we saw him suited up for an NHL regular season game on January 7, he sat on the bench in Calgary for a full 60 minutes. Ten days later, the team announced that he suffered a setback on his injured knee and would be lost for the remainder of the season.

That could have been the end of this story, but of course it wasn’t.

The Canucks re-signed Rodin to an NHL contract this summer, giving him a second chance, but he failed to make the team out of training camp. Instead of reporting directly to Utica, he had to practice with the UBC Thunderbirds for a week (of course he did) while he waited for his visa to work in the United States.

Things were still weird when he got to Utica, as the team was over the limit of veteran players that they’re allowed to dress in a game (an AHL rule). As such, Rodin appeared in just seven games this season with the Comets.

“He wanted to stick it out in Utica and play some games there,” president Trevor Linden told reporters, adding that a hip flexor injury limited Rodin’s AHL game action. “At the end of the day, there was nothing available (in the NHL) and he felt like it was best for him to go back to an opportunity in Europe.”

“It was a competitive (Canucks) training camp and there were some guys that had passed him,” Linden added, also saying that there were other players likely to get a call up before Rodin.

All told, Rodin’s unusual run with the Canucks from the time he was drafted in 2009 reads as such:

Hopefully for Rodin’s sake, he returns to full health and gets his career back on track in Europe. Unfortunately for everyone involved, it doesn’t look like it was ever meant to be in Vancouver.