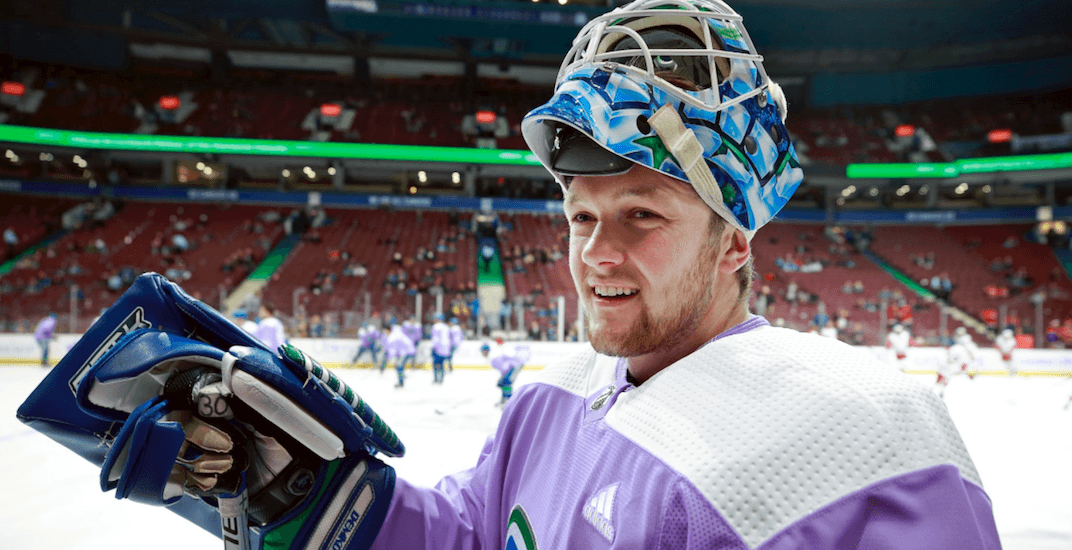 Beer league hockey players, we’ve all been there.

You’re late for your game. You show up to the rink and your teammates are already dressed and stepping onto the ice.

It’s a race against the clock, and you’ve got an impossible task.

That’s what happened to 21-year-old goaltender Thatcher Demko on Monday night, except it wasn’t his fault.

And unlike I would have, he was able to make it on the ice in time.

The Canucks’ prized goaltending prospect was called up to the NHL on Saturday as a precaution, as Anders Nilsson’s wife was set to give birth at any moment.

Markstrom got the start on Saturday, with Nilsson backing up. That was the plan for Monday’s game against the Detroit Red Wings also, until Nilsson got the call.

Nilsson has left the building. Sounds like the baby is on its way. Demko backs up tonight. #Canucks

With Nilsson off to be with his wife, Demko got the last minute call to back up Markstrom.

The race was on.

Demko wasn’t even in the building when he got word that he would be dressing. He was at his hotel.

Somehow, someway, Demko raced to the rink, got dressed, and made it onto the ice in 20 minutes. Canucks reporter Derek Jory snapped this photo at 6:34 pm, just four minutes after warmup began:

Demko is enjoying an excellent season so far in the AHL. The second-year pro has an impressive .939 save percentage in seven games with the Utica Comets.

He’s still waiting for his first chance to play in an NHL game, having also sat on the bench as an injury replacement last season.