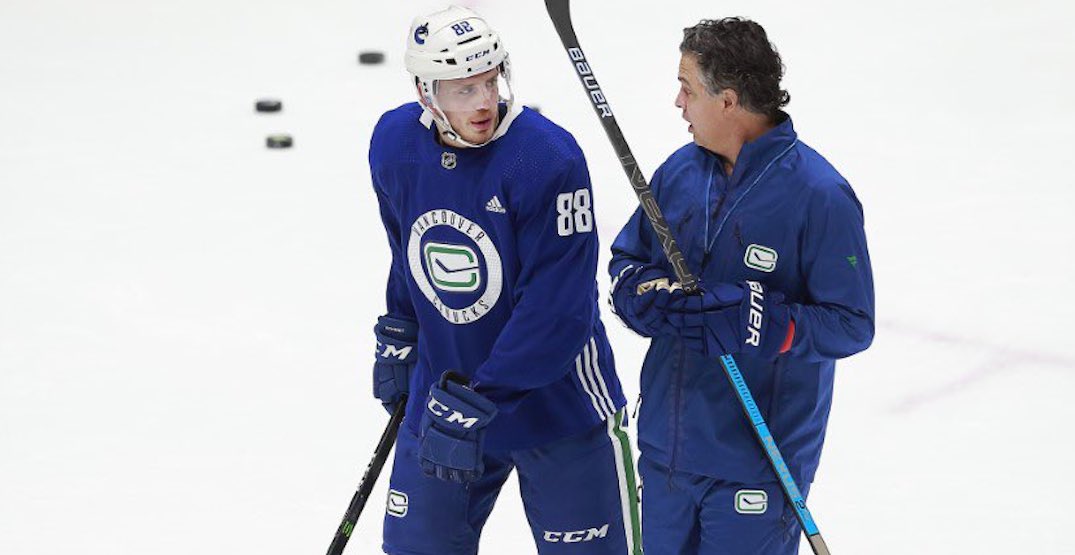 Canucks training camp has begun, with 40 players hitting the ice at Rogers Arena this morning.

But even though it’s only Day 1, the sprint has already begun. With the NHL’s 56-game regular season beginning in just nine days, head coach Travis Green needs to make roster decisions quicker than usual.

And given there’s no preseason this year, those decisions will need to be made in practices and scrimmages, so that evaluation process began today.

Those of us in the media are often told by coaches to not “read too much” into line combinations at practice. But when Travis Green was asked about that today, he said the opposite.

“You can read into them, I know you will anyway,” Green said, cracking the first joke of his virtual press conference.

“We’re going to try a couple different combos… We’ve got to make decisions. We’re not just out there to skate and condition. We’re out there to see how combinations look.”

At the risk of reading too much into Green’s line combinations, we can easily construct a 20-man opening-night roster from today’s line rushes — though there will surely be tweaks made before opening night.

Elias Pettersson lined up with JT Miller and Brock Boeser on his wings as expected. Adam Gaudette was between Antoine Roussel and Zack MacEwen, reuniting a unit that had success last season. Brandon Sutter, meanwhile, was with Tyler Motte and Jake Virtanen.

Those lines have the look of a first game of the season group, with Jay Beagle the only noticeable absence, given he has been a staple on the fourth line for the last two seasons.

The most intriguing combo Green put together was his second line, which featured Bo Horvat and Tanner Pearson with talented Swedish rookie Nils Hoglander.

Whether that trio stays together long term is another story, but it says a lot about what Green and the Canucks think about the youngster. And certainly, there is a top-six forward spot open for a highly skilled winger.

Hockey fans in Vancouver have gotten used to rookies stepping into the lineup and blossoming right away. After all, Quinn Hughes, Elias Pettersson, and Brock Boeser have each been Calder Trophy finalists in the last three years.

The next nine days will be Hoglander’s chance to convince Green that he’s ready for prime time already, at just 20 years of age.

“We don’t really have time for guys to dip their toe in the water… every young player is a little bit different. Some of them come in and they feel comfortable right away, and some of them need some time, they need some seasoning, just to feel comfortable in their surroundings on the ice.

“It sounds silly but all of a sudden you’re out there with Alex Edler, or Millsy and Petey, and you’re taking passes from these guys and it can affect your psyche a little bit… These guys have dreamed about playing in the NHL and all of a sudden they’re on the ice with [NHL players], and some of them it’s their first training camp, first time on the ice in our building… It’s going to affect them today, and we’ve got to decide if it’s going to affect them in the regular season, because we don’t have exhibition games, so these guys are going to have to be ready to go right away.”

Hoglander does have a leg up on others in terms of conditioning, given he played 23 games in the Swedish Hockey League this season, scoring 14 points (5-9-14). But at 5-foot-8 and 183 pounds, size and strength could be an issue.

Another young player put into a spot to succeed today was Olli Juolevi, the 22-year-old former fifth overall draft pick. Juolevi made his NHL debut in the Edmonton bubble during the playoffs last summer, and didn’t look out of place in limited minutes during his one game in the Minnesota series.

Juolevi lined up next to Tyler Myers on what has the making of a third pairing to start the season.

Quinn Hughes, meanwhile, was paired with Jalen Chatfield, though it appears he’s probably just keeping Travis Hamonic’s spot warm while the former Calgary Flames defenceman spends this week in quarantine after arrival from Winnipeg. Newcomer Nate Schmidt was on the right side, next to Edler.

Here’s a look at the lines and defence pairings used today: